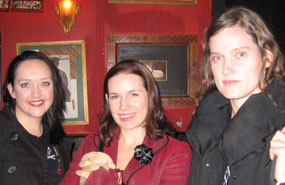 Heather O'Neill channeled the boisterous crowd to a listening halt with a sampling from her poignant debut novel, Lullabies for Little Criminals. Her writing was described by audience member Julia David as "beautifully simplistic." O'Neill, who lives in Montreal, is a frequent contributer to NPR's This American Life; KGB Bar Lit's review of her book is forthcoming.

Next up, Sarah Hall enlightened the audience with the rich milieu of her novel, Haweswater. Hall, who hails from the north of England, is the internationally acclaimed author of The Electric Michelangelo. Click here to read KGB Bar Lit's book review of Haweswater. 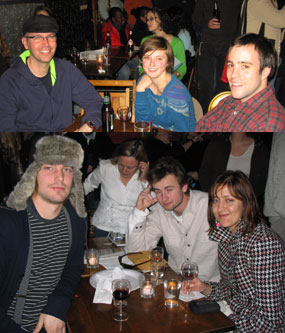 After returning from a brief holiday in each of these writer's fantastic worlds, we realize the tour's title was the cutting jest, and even a superfluous one. This evening's trio is evidence of a potent new force--a cultivation of female writers defining themselves with boots firmly planted in new terrain. "I've been to KGB before, always great stuff. The combination of these three writers was fantastic," said listener Ryan Gessner.


"Tonight, I met 4 or 5 bloggers. Meeting people in this setting makes virtual communication tangible. Everyone was very approachable," noted Jason Boog, of thepublishingspot.com.

"Lit Chick Invasion" will continue on to Boston, Minnesota and San Francisco. Thanks to Harper Collins's strategic packaging of this potent female trifecta, a sexy evening was delivered to the ears cozying up close between KGB's red walls.

***Subscribe to KGB BAR Reading Series podcasts in itunes by clicking: http://phobos.apple.com/WebObjects/MZStore.woa/wa/viewPodcast?id=203098427; or by copying and pasting: feed://feeds.feedburner.com/kgbbarlive into your favorite podcast application (iTunes, Thunderbird, etc.) In ITunes, simply go to Advanced, then select "subscribe to podcast," and past in the url above! *** 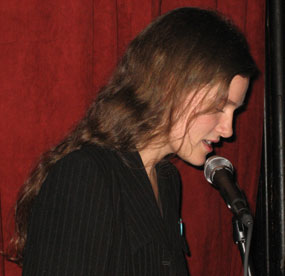 Heather O'NeillKGB: One quote that struck me from what you read tonight from "Lullabies For Little Criminals" went something like, "Violence never gives you a notice that it's time to knock it off." Is that one of the themes in this book?

HO'N: So many violent things happen to the children in this novel, but one of the main character's redeeming qualities is that she deals with everything without getting angry, because anger kind of rocks you and takes you down this vortex. So the children are always tempted to become angry, but they try to do something other-try to stay lovely and imaginative.

KGB: Is the book a tribute to the glories and innocence of childhood?

HO'N: I think it is, because a child has a right to be a child no matter what happens to them. So this book is about children who have theoretically lost their childhood, but are still kind of as mystical and wondrous as any other child who has been spared these experiences.

KGB: What got you interested in this theme? Was it memories from your own childhood, states of feeling you remember?

HO'N: Yeah, I think so. I come from a generation that fetishes its own childhood. So I sort of wanted to write about what I remember from when I was a kid. I always find that poor kids act like aristocrats, they invent their own world where the junkies are the heroes and princes -until a certain age, when it all falls to hell.

Sarah HallKGB: Sarah, you mentioned that Haweswater is your first novel, and that it seems distant to you now. Could you tell us what it is that you've been working on lately?

SH: Now I've been working on a novel based on the life of an Italian still life artist called Giorgio Marandi. There's a character not dissimilar to him, and it's partly based in the 1960s. There are four different narratives that weave together, and I've just turned that in to my publisher. I'm also working on a short novel, a dystopian futuristic novel, that I hope to finish by Christmas.

KGB: The longer novel you mentioned doesn't surprise me at all, because what you read tonight is very visual, very painterly. I think you named every color in the spectrum! Do you have a background in art, do you draw or paint?

SH: When I went to university, I studied English and Art History. I think it bleeds over into the work. I'm really into the subject matter, and I tend to come back to it again and again. I don't paint, but I do make these weird Gothic shadow boxes with found objects. The first one I made was filled with crockery pieces that were washed up on the shore of the Haweswater Reservoir. 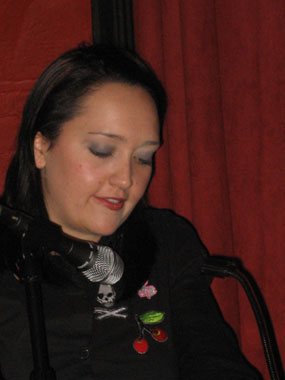 Emily MaguireKGB: In Taming the Beast, your first book, I noticed that you included a lot of dialogue. Are you playing to one of your strengths?

EM: Yes, it seems to come naturally to me, I do a lot of dialogue. My ideas often come from listening to people and to their conversations, and it is something I haven't really had to work at - I have an ear for dialogue. Writing narrative, that's something I have to look at harder, I think.

KGB: The dialogue doesn't sound necessarily "Australian," to me. Is it meant to be?

EM: I grew up in the suburbs of Sydney, where we absorbed so much international culture -- American culture, of course, but also British, that often when we see "Australian" films, for example, they seem foreign to us, too. So I suppose it's kind of an International English, with an occasional slang word or something that's different.

KGB: Some people say that writing about sex is hard. You write a lot about sex, what do you think?

EM: When I started writing the book, I didn't think it would be published, I didn't have any experience, and I didn't think about that at all. I didn't find writing the parts about sex any more difficult than other kinds of narrative. Later, when I knew it was going to be published and I went back to edit it, there was a self-consciousness but that's more worrying about what people's reactions would be rather than worrying about the writing itself. A lot of people assume that it's autobiographical, which it's not at all! That's been weird for my family and weird for my husband.