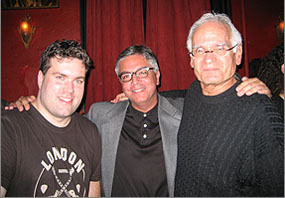 Ryan Boudinot, Gonzalo Barr, George Rabasa CLICK HERE TO LISTEN TO GEORGE RABASA, GONZALO BARR, AND RYAN BOUDINOT
Reading from The Cleansing, George Rabasa's short fiction has appeared in Story Quarterly, Glimmer Train, The MacGuffin, and South Carolina Quarterly.
Reading from his collection The Last Flight of Jose' Luis Balboa, Gonzalo Barr is the winner of the 2005 Bakeless Prize.
Reading from his collection The Littlest Hitler, Ryan Boudinot's work has appeared in the Best American Nonrequired Reading 2003 and 2005, Nerve, McSweeney's, and Black Book.
***Subscribe to KGB BAR Reading Series podcasts in itunes by clicking: http://phobos.apple.com/WebObjects/MZStore.woa/wa/viewPodcast?id=203098427; or by copying and pasting: feed://feeds.feedburner.com/kgbbarlive into your favorite podcast application (iTunes, Thunderbird, etc.) In ITunes, simply go to Advanced, then select "subscribe to podcast," and past in the url above! ***
Interview with Ryan Boudinot 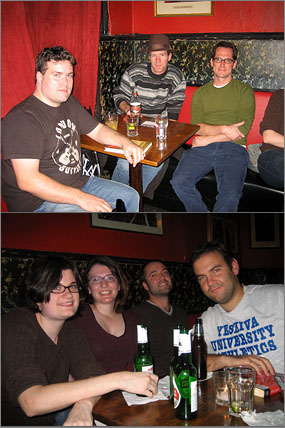 Ryan Boudinot, Rick Moody, & PJ Mark; Jennifer Boudinot, Kate Stout, Karl Neergaard, & Matt MillerKGB: Would you tell us about the genesis of the story you read from tonight, "On Sex and Relationships?"

RB: Sure. I was thinking of friends of my wife, of friends from college that you sort of lose touch with, and Rick Moody contacted me and asked me if I would be interested in writing something for Nerve magazine. So I said, "Sure," and I asked him if there were any guidelines on what the story should be. He said, "Well, the only guideline is that the story has to be about sex or relationships." And that's where I got the title. It's the newest story in the collection.

KGB: Had Rick Moody been a teacher of yours?

RB: Yeah, I studied with Rick at Bennington in the low-residency program. Before that, I went to Evergreen State College, then I worked in a bookstore in Olympia, Washington for a couple of years before deciding to get my MFA. I needed to do something to justify my writing a lot every day.

KGB: Have you always been a big reader?

RB: Absolutely. I read a lot of Stephen King as kid, then I had a teacher who beat that out of me and introduced me to Eastern European writers and the Beats in high school, then I went more international with my reading taste, and now I've been reading a lot more nonfiction. I guess my influences now are what is termed "the new weird," Trini Dalton, Aimee Bender, Kelly Link. I love that magical, fantastical strain of writing, but I also like realist fiction. 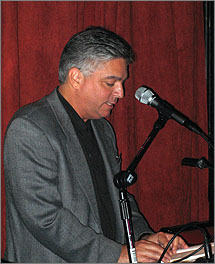 Gonzalo BarrKGB: Your collection, The Last Fight of Jose' Louis Balboa, won the Bakeless Prize. Had you done much writing before that?

GB: Yes, most of it in boxes and drawers that will probably never see the light of day.

KGB: What were you doing before the Bakeless Prize shined a light on your work?

GB: I practice law during the day, that's how I pay my bills. But in the year 2000, it was a key point in my life. I realized if I wanted to write I had to change the way I was approaching law. I was a trial lawyer, I first-chaired cases, which is like being the captain of the plane. I wasn't thinking about characters, I couldn't write, so I joined another firm, in a practice which allows me the time to focus on my writing. Most mornings I wake up early, I write in the morning then I go to the office and do what I have to do to pay my bills.

KGB: What inspired the character of the young girl in the story you read from tonight, "A Natural History of Love?"

GB: She was just there! Some characters in the collection do have counterparts in real life, they were at least initially launched by somebody I've known, but no, she was all her own. Maybe she's the daughter I wish I had, maybe that's it.

George RabasaKGB: The Cleansing, which you read from tonight, is your third book, and your first was published in 1996. What did you do before the first book was published?

GR: I was a copywriter and a creative director at ad agencies. I would get up at four in the morning and write fiction, then go to work and fall asleep in meetings. I was paid to write, but it was short, punchy stuff for advertising. I'd had some short stories published here and there, but I had my first book published 35 years after I published my first short story. So it took awhile.

KGB: In the opening passage you read from tonight, a pathologist looks at a slide of tissue belonging to a friend who has died and imagines himself eating the flesh of his friend. That was a very visceral moment. Tell us how that came to you and what it is about.

GR: Here's the guy, he's a pathologist, he's looking at slides, he sees the name of his one-time friend, and he just fantasizes what it would be like to obliterate him, to totally conquer him, because they broke their relationship at a time when they were not on good terms, and for 20 years, the guy has resented this one-time friend, and he has a fanstasy that says, "if I ate him and swallowed him, he'd be done with."

Reinhardt Suarez, Ellen Garrison, Paul Jackson; Stacia Decker, Matt Nusbaum; Ryan Boudinot, Corinne Blalock, Sarah PulsKGB: You said that you had decided not to return to writing about Mexico until you'd had a couple of decades of distance from that material. Why did you need that much time?

GR: Mexico is where I was brought up. I became an adult there. I knew Mexico City very intimately, but I have very mixed emotions about it. Part of me loves it, part of me hates it, so I needed that distance to be able to say, "I can look at this, I can put it in perspective."