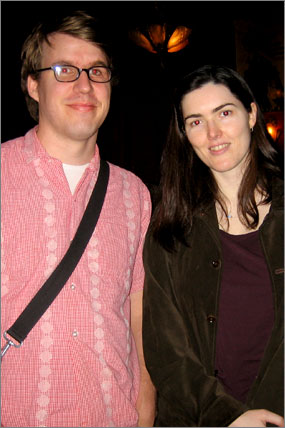 Reading from her novel, Love Creeps, Amanda Filipacchi is the author of Nude Men and Vapor.

Reading from his collection, Permanent Visitors, Kevin Moffett was born and raised in Daytona Beach, Florida. His short fiction has received the Nelson Algren Award and appeared in McSweeney's, Tin House, the Oxford American, the Chicago Tribune, and Best American Short Stories 2006. He writes a monthly column about zoos and amusement parks for FunWorld Magazine.

***Subscribe to KGB BAR Reading Series podcasts by copying and pasting: feed://feeds.feedburner.com/kgbbarlive into your favorite podcast application (iTunes, Thunderbird, etc.) In ITunes, simply go to Advanced, then select "subscribe to podcast," and past in the url above! ***

KGB: The passage you read tonight, which is hilarious, is from your book Love Creeps. In it, Alan the stalker goes to a self-help class and builds a vagina out of clay-

AF: This passage stands alone well, so I like to read it. I'm always happy when I don't know too many people in the audience, so they haven't heard it before. For this section I did read school catalogs, and this class is a combination of a few things I read about. In the movie version [forthcoming] the three characters are all taking the class together, which is a pretty good idea. They're all going to be sitting side-by-side, sculpting a vagina.

Charlotte Douglas and Leslie; Frederic Tuten, Amanda Fillipachi; Jennifer Lee Wolfe, LewisKGB: Alan the stalker says something like, "reality is so boring that any misperception is invariably more interesting." Tell me about that observation.

AF: It's funny, because my assistant recently created a MySpace page for me and he Googled all the people who listed me as their favorite author. One person had taken that very quote and used it as the quote for her webpage, but she didn't attribute it to anyone or anything.

I don't usually do a lot of research for my books, but for the classes, I did. I read school catalogs to the point that my eyes were so blurry that I started misreading the names of classes and I thought, "My God! The classes I think I'm reading are so much more interesting than the actual classes."
KGB: What influences you as a writer?

AF: My favorite writers, like Proust, didn't influence me at all. Not much really influenced me, I guess. I get people who write to me to say, "I went on Amazon.com to ask reviewers to recommend other people who are sort of like you and no one can." They can't find anyone like me and since it takes me a long time to write each book they get frustrated, because there's only three [books] right now to read. I have six years between each book. 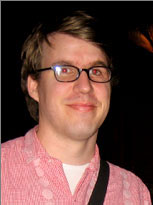 Kevin MoffettKGB: Both "Permanent Visitors," which you read tonight, and "The Newcomer," which is on our website, involve American culture and the English language as looked at through the eyes of a foreigner.

KM: It's interesting you should notice that because it's something I noticed about these stories after I had worked on them. It's partially because there is, in Florida, a strange diaspora of Russian people, of people who retire there from large cities, and in Daytona it's sort of like a mini New York. You have these communities of people and they're all forced to live with one another. This really interested me when I was young, as a fourth-generation Floridian, seeing all these different cultures come together.

KM: Well, specifically, in that story, I started with the idea of a character based on my wife's father. He came from Greece, from an island, and he came to study at what turned out to be a kind of disreputable school in Chicago. It was called something like "The Institute For Advanced Intelligence," and it took him a while to figure out that it was not an actual college. But he had also come to meet a wife, and he did, so it was successful. But the story is all about him misinterpreting everything that was going on around him.

KM: I'm working on a novel. I used to write for an amusement park magazine-FunWorld-and I've been toying with this novel idea that's semi-memoirish, semi-autobiographical. It's got roller coasters in it and stuff. It's strange that I ended up writing for that magazine. I vowed I would never go back to certain cities in Florida and I found myself, working for that magazine, going back to all of them. Orlando-I've been back there like seven times.