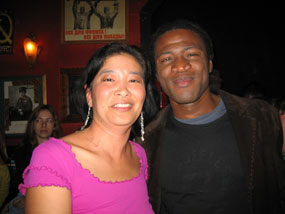 10.15.06 CLICK TO LISTEN TO CALVIN BAKER AND KATHERINE MIN
Reading from his novel, Dominion, Calvin Baker is the author of Naming the New World and Once Two Heroes.
Reading from her novel, Secondhand World, her story "Eyelids" was listed as one of the 100 distinguished stories in The Best American Short Stories of 1997 and her story "Courting a Monk" won a Pushcart Prize.
***Subscribe to KGB BAR Reading Series podcasts by copying and pasting: feed://feeds.feedburner.com/kgbbarlive into your favorite podcast application (iTunes, Thunderbird, etc.) In ITunes, simply go to Advanced, then select "subscribe to podcast," and past in the url above! ***

KGB: You talked about, in your opening remarks, the ideas of making a nation and of making a home. Why is this important in your novel, Dominion?

CB: When we think of American history, of slavery, of the Civil War, we think of dismantling something. We don't think of how it is made. When I say this is a novel about making a country, yes, it is, but on a very personal level it is also about making a home. It's about one man, a free black man, trying to make a place for himself in the world and about how history intersects with that.

KGB: One moment that really stood out in the passage you read from was when a soldier who was having a leg amputated was being treated on the battlefield, and you described how the medics sawed through the bone and then dressed the stump with flour. Where did that come from?

CB: That's a historical detail. By grounding the book in fact, it gives me license for some other things that are less factual.

KGB: You've blended historical elements and romantic elements. Would you consider Dominion to be of a genre such as historical fiction or historical romance?

CB: I think this is a novel about right now; the past is just a lens to amplify right now. It's almost deceptive to call this a historical novel. Yes, it's set in the past, but it's about those things that we argue about right now.

KGB: In your prefacing remarks, before you read from your novel Secondhand World, you talked about the idea of our judging others, how it works in an inverse proportion to how much life experience we have. What interests you about that?

KM: The seed of the novel was the idea that when we have the least life experience we're the most judgmental. We have the clearest sense of right and wrong. The process of maturation is learning that the world is a much grayer, more difficult place. I certainly observed this in my own life. In my extended family there was this incredibly harsh judgment by the younger generation towards the older generation. And sometimes a judgment can really be tragic; it can lead to severe consequences.

KGB: The main character in your book is Korean. Are you Korean, or part Korean?

KM: Yes, I'm 100% Korean. What I was interested in with the novel was the difference between the generation of immigrants who came in after the Korean War, which was my parents' generation, and their American-born children. Because there's always a conflict between parents and children, between generations, but when you add to that this complex cultural difference it's very hard for the children to understand the parents. And the main character wants to be like the kids around her. She just wants to fit in.

KGB: And I imagine living in Plymouth, New Hampshire, there's not a big Asian population there?

KGB: What's next for you, Katherine?

KM: I'm writing another novel. I've said everything I want to say about Korean-American families in this book, and in my next book I take on Asian fetishism, why so many men find Asian women attractive, and why that's a bad thing. Is it a bad thing? Because Asian women, we tend to scorn guys like that. We call them "Rice Kings."