THE SILENCE OF ANIMALS by John Gray 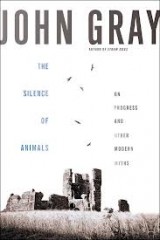 Roughly ten years after his singular and eye-opening philosophical work Straw Dogs, John Gray has returned with The Silence of Animals (Farrar, Straus and Giroux) to once again take humankind down a peg. Both books bring to mind those studies that occasionally come out in support of the vague concept of Depressive Realism, which claims that, overall, people with depression may have a more realistic view of the world than those who don't. There's not much, if any, hope or optimism to be found in either work – which is sort of the point.

The end of thought seems to be unending doubt. Facing this situation, the poet Wallace Stevens suggested that we put our trust in fictions: “The final belief is to believe in a fiction, which you know to be a fiction, there being nothing else. The exquisite truth is to know that it is a fiction and to believe in it willingly.”

So, do we dare lift the self-deceiving veil of optimism, to see our world more for what it really is?As the title indicates, The Silence of Animals circles back to the theme of comparing human and animals (the subtitle of Straw Dogs is “thoughts on humans and other animals”), this time with an eye towards “progress and other modern myths” (again, the subtitle).

While it is true that the quality of silence is different in other animals, the difference is not that of which [Swiss Catholic theologian Max] Picard writes. Whereas silence is for other animals a natural state of rest, for humans silence is an escape from inner commotion. By nature volatile and discordant, the human animal looks to silence for relief from being itself while other creatures enjoy silence as their birthright. Humans seek silence because they seek redemption from themselves, other animals live in silence because they do not need redeeming.

While the contrarian might point to the weakness of making an argument on the technically unverifiable assumption that animals don't experience inner turmoil, the point is clear. Indeed, Gray's ideas, while perhaps controversial to some, can be quite clear and self-evident once the barriers of deeply entrenched pre-conceived notions about humanity are taken down. For those already initiated with Straw Dogs, The Silence of Animals is a natural extension of the philosophies that it put forth. In the Western world, whether you subscribe to a religion or to secular humanism (or Darwinism), all see humanity's path as one of forward progress and improvement, setting us apart from all other animals on the planet.It might seem an odd choice to humble mankind via building a blanketing perspective by putting the works of writers, memoirists, philosophers, and Freud (who is too heavily relied on here, along with one or two others) in conversation with one another, thus reaffirming our inescapable reliance on our own perspective alone, but Gray does an excellent job pulling enlightening passages and fascinating concepts from sources of varying, sometimes impressive, obscurity and coming at them from unexpected angles. At times, Gray hits the nail on the head and articulates a particular issue with the modern human condition that is so easily taken for granted:

The idea of self-realization is one of the most destructive modern fictions. It suggests you can flourish in only one sort of life, or a small number of similar lives, when in fact everybody can thrive in a large variety of ways. We think a happy life as one that culminates in eventual fulfillment. Ever since Aristotle philosophers have encouraged us to think in this backward-looking way. But it means thinking of your life as if it had already ended, and none of us knows how we will end. Spending your days writing an obituary of a person you might have been seems an odd way to live.

The Silence of Animals is at its best when Gray steps above the fray of academic dialogue he has weaved together and calls it like he sees it. It reminds the reader what made Straw Dogs such a revelation ten years ago, and why he remains one of modern philosophy's necessary minds. John Gray is the author of many critically acclaimed books, including The Immortalization Commission, Black Mass, and Straw Dogs. A regular contributor to The New York Review of Books, he is Emeritus Professor of European Thought at the London School of Economics.