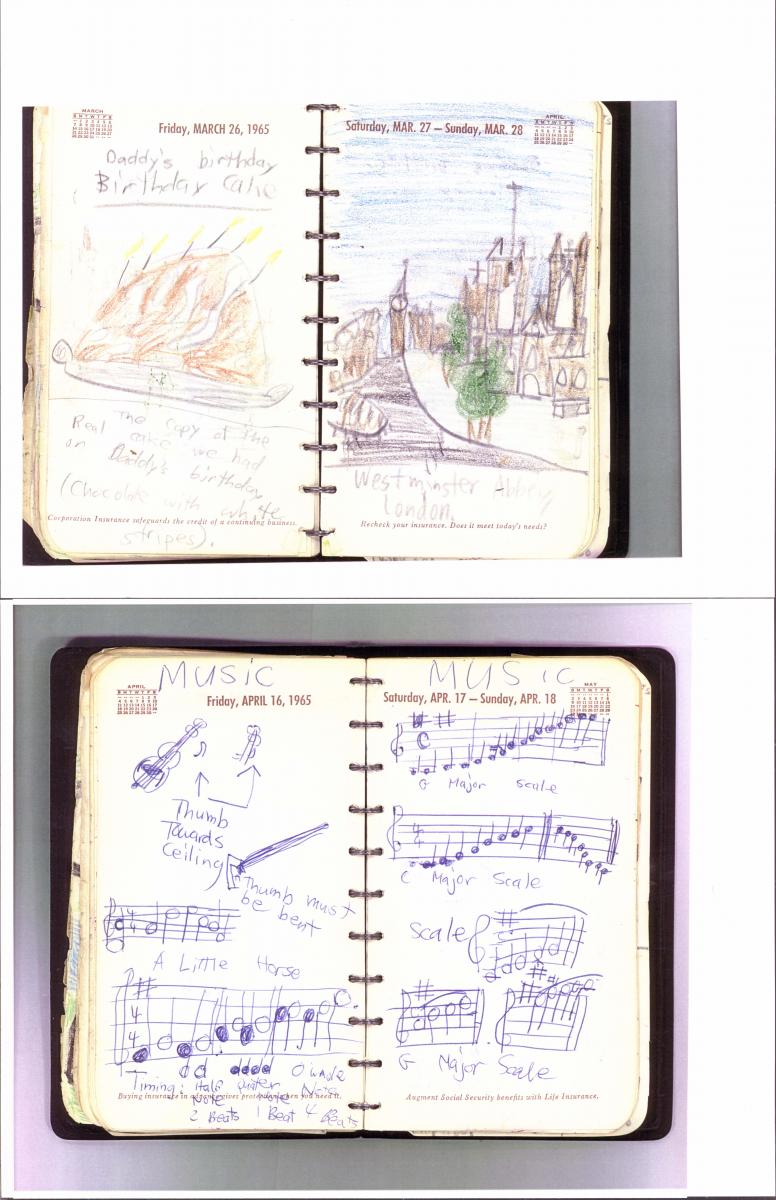 There I was at the Chelsea Flea Market, rummaging through a box of paperbacks. Most of them were bad, of course, but then there was that one. Faux-leather, palm-sized. Grayish words stamped on the outside that once were yellow? orange? They said this: Leroi, Flesch & Co Insurance 55 Liberty St. New York, NY 10005. And on the first page, this: 1965 Diary with Special Insurance Data from Leroi, Flesch & Co. Below, a boy had written Robby’s, the letters wavering even though he’d printed them with care.

And so for 50 cents I bought this boy’s diary. A flabby man wearing a T-shirt transparent with age named the price, took my money. Would have charged me a nickel if I hadn’t gasped when I opened it. 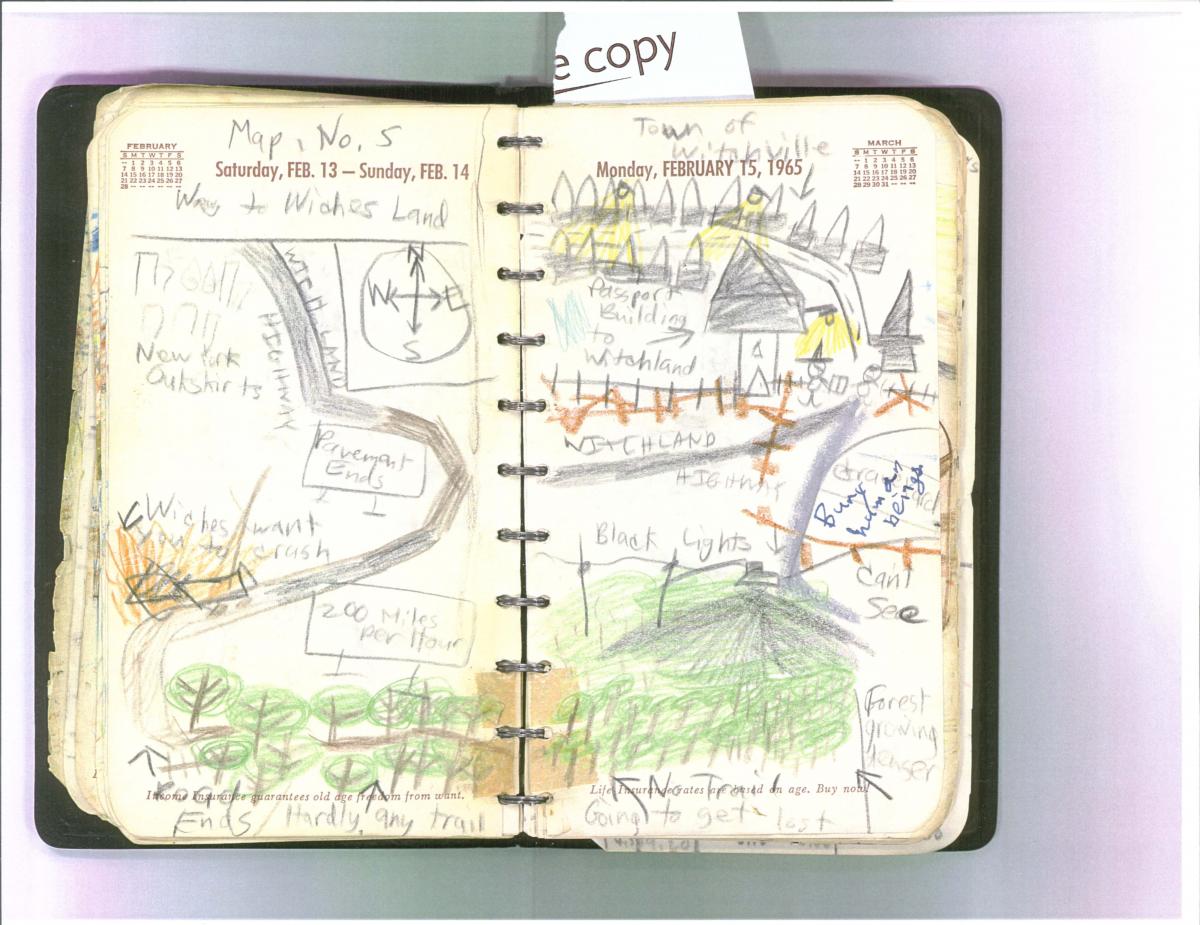 Flip through and see what Robby drew.

Here is his neighborhood: green rectangles for lawns, squares topped with triangles for houses.

Here is Paris, France. The Eiffel Tower rendered as a capital A. A furious scribble (we went here the Louvre museum). An arrow proudly points the way to our Hotel!

Here is the Way to Witches Land. A thick, serpentine road. Beside a hairpin turn, Robbie has drawn a crossed-out car with a warning: witches want you to crash. After a forest of lollypop trees, another warning: No Trail Going to get lost.

The boy has also drawn maps for New York, Nevada, Alaska. You come to the map he calls Robert’s Land on Thursday, June 24, 1965. There, a star inscribed in a circle indicates Robertville, the town capital.

But every page is his geography.

Robby Schwarz sits at the third desk in row 7, the last row. To his right is Susan C. (Susan H. sits in front of her). There are two blackboards and a wardrobe. The teacher is a stick figure with no mouth and three little loops for hair.

Robby will have five classroom jobs in 1965: Leader, Wardrobe Monitor, Book Monitor, Out of the Room Monitor and TV Monitor. Underneath his classroom sketch is a typeset message from Leroi, Flesch & Co: Life Insurance rates are based on age. Buy now!

With Robby’s diary in your hands, you are a time-traveler. You peer into the past, foretell the future. You know, for example, that Robbie will learn Spanish this year. You read the lists:

When school is almost out, on Sunday, May 16, 1965, Robby Schwarz will see the Twenty-Fourth Spring Concert at Queens College. He will copy into his diary the program: Berlioz Op. 2. Joseph Surace, Organ. Carl Eberl, Conductor. Polynesian Dances. Intermission. This year Robby will take violin lessons. He will learn all the musical notes. He will remember, when holding the instrument, to keep his thumb bent.

But enough predictions about what will be.

Flip through the diary backwards and you are in the past again: Robby has been to Trafalgar Square, Westminster Abbey, the Houses of Parliament. To Niagara Falls. To a Snowy Park Monument in Colorado. To Lhasa, Tibet, and Davos, Switzerland. Robby has also explored interior landscapes, illustrating the circuitry in his radio, the steering coils in his television set. Ah, the jittery itch of precocity! The insatiability of privilege, wild leapings from one page to the next!

Can you hear his mother?

(“What a Picasso my Robbie is! A drawing of the England Garden!”)

Can you hear Robbie?

(“I can say them fast Plutoneptuneuranusjupitermarsearthmercuryvenus.”)

Flip to July 16, 1965. There is the typeset message from Leroi, Flesch & Co: Augment Social Security benefits with Life Insurance! Above, Robbie has drawn the front page of the Robert Daily Chronicle. It looks like this:

Our beloved President Robert Schwarz Sr. died today at the age
of 43 because of a heart attack. The doctors said it was a heart
attack from strain. Our newly elected president will be Robert
Schwarz Jr.

The creepiness is not lost on you. Did Robbie’s father die on July 16, 1965? Or was Robbie committing an act of imaginary patricide? So you flip through this boy’s diary one last time to get the whole scope of it, to take one last look at this Spanish-speaking, violin-playing, eight-year-old globe-trotter. Memories as they are recalled, histories as they are written, have a way of leaving things out, after all. Always, there is wishing and there is memory, but it is difficult to tell the difference. 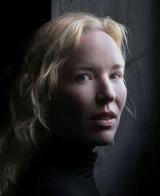 Rebecca Donner’s third book, All the Frequent Troubles of Our Days, will be published in August 2021 by Little, Brown in the US and Canongate in the UK. She is the author of Burnout, a graphic novel about ecoterrorism, and Sunset Terrace, a critically acclaimed novel about latchkey kids in LA. Her essays, reportage, and reviews have appeared in numerous publications, including the New York Times and Bookforum. She was director of the KGB Fiction Series for four years, from 1998 to 2002.