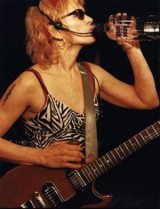 It is one of my great pleasures to meet and work with many talented writers. One is Diane Spodarek (pictured here), a rocking writer who is working on an eclectic new book, The Drunk Monologues. She took a moment to ask and answers some questions for KGBBAR.LIT about this new project. Q: What is the working title of your book?A: “The Drunk Monologues.” Q:Where did the idea come from for the book?A: I wrote a lot of drinking stories, which I read in various venues and gigs like the Nuyorican and Bowery Poetry Cafes. I sent the manuscript to the Horse Trade Theatre and they produced it. Russ Dobular, the artistic director at the time, directed it with me as a solo show and I had to edit out monologues for “dramatic purposes.” The book gives me the opportunity to bring all the stories together again.Q: What genre does your book fall under?A: So far the monologues have been poetry, short stories, a solo play, fiction, creative non-fiction, and memoir. Excerpts are published in fiction anthologies and monologue books. Maybe it's a novella. I hope that it's literature.Q: What actors would you choose to play the part of your characters in the movie rendition?A: Lily Tomlin. She's a master at multiple characters and she's from Detroit where many of the early stories take place there - she would get that. For the music, Leonard Paul Johnson would play drums. He's the drummer of my Detroit band and is fantastic. He's in high demand and is still introduced as the drummer from “The Dangerous Diane Band.” Not something he encourages but I love it. Even without social media, the DDB lives. I recently got an email from a Hollywood producer to place my record covers in a crime scene that takes place in Detroit. It's a movie with "A list" actors so I'm going to live forever as Dangerous Diane. It's fantastic.Tom Waits would also be great. He once said that he's a musician because it was either that or air conditioning repair. That's how I feel about being an artist.I could do it, but I don't like pretending I'm drunk anymore. Acting is hard. You have to find the right balance between narcissism and masochism to be any good.Q: What is the one sentence synopsis of your book?A: (Hilarious) Drinking stories from birth to death. There seems to be enough books about recovery but my story is different. It's not about how recovery saved my life. I hate recovery. Sobriety is overrated. Q: How long did it take you to write the first draft of the manuscript?A: The first monologue was 1988. I'm at the point of so much editing that the first draft sometimes is the best. Endings are not easy when I'm writing stories. I'm better at accepting that a song or a poem is over. Q: Who or what inspired you to write this book?A: Steve Cannon from Gathering of the Tribes invited me to read at the now defunct Avenue B Social Club in the 80's. The audience response was crucial to understanding what people liked and didn't like in (other people's) drinking stories. Laughter is the best odometer. Then I saw John Leguizamo in “Freak” and knew I had a Broadway show. I never got that far but Horse Trade and the Fringe Festivals in New York and New Zealand were great. Also, seeing some of the monologues in anthologies is inspiring.Q: What else about your book might pique the reader's interest?A: Chapter One: Train Birth - I was born in motion. The train rocking and surging, metal against metal, I popped out on a double seat in a little town called Puce, which is French for flea – or so they tell me – fifteen miles east of Windsor Ontario. Water blood afterbirth and my mother's tears mixed with clapping and cheering and a champagne toast. Some fell on me, and at birth, I was already moving and drinking.Q: Will your book be self-published or represented by an agency?A: My novel “Girl Culture” was rejected twenty-two times by top publishing houses. At the time, I was seeing a poet/cab driver for about a month and when he asked me to marry him – over a few pints of vodka – I said yes. We flew to San Francisco and the judge stopped the ceremony until I stopped laughing. After, my friend Robert Yarra and his girlfriend Marcie took us to a revolving restaurant in the sky where we ordered champagne. However, my new husband wanted a bloody Mary and I knew I married the wrong man.I could publish it myself as a blog with drawings and music. Either way, I intend to celebrate with a glass of red wine when I finish. After sixteen years sober, I think I deserve a drink. Recovery is so over-rated. I'm not having any fun since I hit bottom.Q: What is it that you want of a book?A: I want my book to do what books do for me: EVERYTHING. It should come with a shot of vodka. That's what I really want. Diane Spodarek is a Canadian-American artist and writer. She is the recipient of an NEA artist's fellowship in video art and two New York Foundation for the Arts artist's fellowship in creative nonfiction. Excerpts from, “The Drunk Monologues,” are published in “Young Women's Monologues from Contemporary Plays,” “The Unbearables' Big Book of Sex,” "Even More Monologues for Women by Women," and “Gathering of the Tribes 12.” She was the "First Runner Up" at the Nuyorican Poets Café "First Grand Poetry Slam" in NYC and her short story “The Farmer in the Dell” will appear in the horror anthology, “Apocryphile” in 2013. www.dangerousdiane.blogspot.com