On a Clear Night You Can Read Forever: Scribblers on the Roof

For more than fifty years a synagogue has stood at the northeast corner of West End Avenue and West 100th Street in Manhattan. The synagogue is called Congregation Ansche Chesed, and in the summer of 1999 its roof became home to an open-air reading series featuring a long list of notable American Jewish writers, many of whom happened to live nearby. Cynthia Ozick, Aryeh Lev Stollman, Dara Horn, and Binnie Kirshenbaum are among the authors who have read at the synagogue's “Scribblers on the Roof” series, and they are among the authors who have contributed to a forthcoming anthology of the same name.

Scribblers on the Roof (the anthology) was inspired by the success of "Scribblers on the Roof" (the reading series); the book, which will be released by Persea Books in July 2006, was assembled by Melvin Bukiet and David Roskies. The editors and contributors waived compensation so all proceeds from the book could be donated to Ansche Chesed, where the reading series began at the suggestion of David Roskies, an author, scholar, and member of the Ansche Chesed adult education committee. Roskies believed the shul was an ideal place for writers: "A place where writers matter must be a place where culture is accessible, cumulative, and communal. Some people will come by only in the summer, only on nights when the theaters are dark. But the place itself must be open at other times as well, for other kinds of learning, reading, hearing, talking, singing, arguing."

"I've always thought that Jewish writers ought to remain essentially luftmenschen: that is, that their proper haunt should not be the earth but the air," says anthology contributor Steve Stern. He calls the synagogue roof "the most appropriate Jewish literary venue ever conceived." What's more, says Binnie Kirshenbaum, "reading on a summer's night, on a New York City rooftop at sunset - that's pretty wonderful."

Melvin Bukiet says his motivation for anthologizing the roof's readers was simply to reflect the pleasant, popular evenings atop the synagogue. "I wanted a record of a moment in time, not necessarily something to stand for all time." David Roskies, his co-editor, brought a broader goal to the project - Roskies' mother had hosted Yiddish literary soirees in their home in the 1940s, and as a child Roskies crouched under the piano to listen as great Yiddish writers and poets read their work. "Scribblers was essentially an attempt to revive my mother's literary salon, and a way to acquaint myself first-hand with what had happened to Jewish writing since the demise of Yiddish," he says.The editors (who conducted many of their editorial meetings on a bench at a crosswalk up the block from Ansche Chesed) decided to limit the first Scribblers anthology to works of fiction. This still left a long list of rooftop readers from which to choose; Bukiet allows that there was "a bit of horse-trading" as he and Roskies winnowed their way down to twenty authors. All stories and excerpts had been previously published or collected, but Cynthia Ozick's "Stone" had been published only once at the beginning of her career, and was subsequently forgotten. Melvin Bukiet discovered the story in the Columbia library's deacquisition room when he stumbled upon several bound copies of an Italian literary journal from the 1950s called Botteghe Oscure. He spotted "Stone" in one of the volumes; the contributor's note read "this is Cynthia Ozick's first story." He paid a few dollars and took the book home.

The story of a knickknack collector who purchases an abandoned statue of the prophet Mohammed, "Stone" had never appeared elsewhere, and Bukiet had never seen it mentioned in books about Ozick. "So I was aware of this story that she had clearly, deliberately never collected," he says. When he asked Ozick for permission to include "Stone" in the anthology, she was shocked that he knew of it. Although she donated the story, she had a change of heart when she saw the book proofs. "Melvin, this is a terrible story, I'll give you anything else!" he recalls Ozick pleading.

Bukiet stood firm. "I thought it was rather a coup, and I find it a fascinating story," he says, especially considering that Western readers in the 1950s were far less interested in the Muslim world than we are today - "Stone" hinges on the fact that Islamic tradition disallows physical representations of Mohammed. Ozick made the case that the story was just a bad bit of juvenilia, but Bukiet disagreed. (A novelist himself, he knows writers are always their own worst critics.) As a compromise, he inserted a note about Ozick's qualms in his introduction to the anthology. 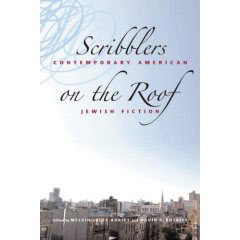 Cynthia Ozick writing about a WASPy divorcé meeting a cursed statue of Mohammed is an indication of the gratifying breadth of Scribblers on the Roof - the collected stories are by authors young and old, male and female; some stories are specifically about being Jewish, some are not. Tones range from the serious (Sonia Pilcer's "Paskudnyak," about the daughter of Holocaust survivors coming of age in New York) to the decidedly witty (in Janice Eidus' "Elvis, Axl, and Me," the King turns up in the Bronx, dressed like a Hasid and hungry for kreplach). The subtitle on the book's cover reads "Contemporary American Jewish Fiction," but what, then, does that mean? If the common thread is not stylistic or thematic, what is it?

Melvin Bukiet has to consider this for a long moment. "That against the odds they exist," he says finally, "and in many cases their writing reflects the fact that they exist against the odds. It doesn't matter whether the tone of the story is grief-stricken or joyous. It still shows the precariousness of Jewish life, and by extrapolation, all life."

Author and contributor Mary Morris agrees. "There is no one thing that defines the Jew or the Jewish writer. It's a polymorphous thing, as this anthology suggests. What we have been through as a people we carry on our collective shoulders and express it in our diverse voices. This is what I love about this book and this reading series."

"We were trying to be catholic," Bukiet says with a smile. "Small c."

* All photos provided by Michael Brochstein. Published with permission.

Mary Phillips-Sandy is a native of Waterville, Maine, now living in Brooklyn. She was a co-founder of the Maine International Film Festival and has worked as a legal researcher, a theater tech, a non-profit secretary, and a ticket-seller in several box offices. Her website is millwhistle.com.