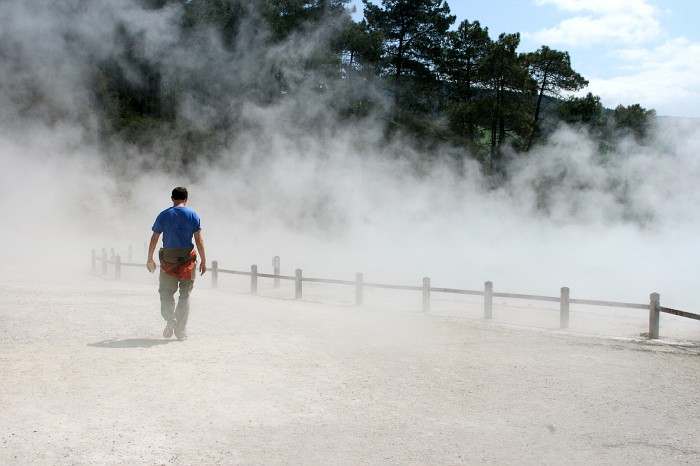 Vladimir Kleyman was born in Chernovtsy, Ukraine and grew up in Atlanta, Georgia. He now lives in New York City and is working on a collection of short stories.

You’ve sweated an hour on the B train. You’ve seen the pink, gondola-shaped crystal chandeliers in the Venezia Catering Hall on Coney Island Avenue, the miniature gilded Eiffel Towers lining the entrance to Frantsia Wedding Palace off Brighton 6th, and the giant, Buddha-like matryoshka on the roof of the Moscow Nights Party House just south of Kings Highway. You haven’t put down a deposit anywhere. “Just research,” you told your fiancée before you left the Upper West Side. “Just research,” she repeated, with an edge, as she packed her carry-on for an anesthesiology conference in D.C.

Since you are already in Brooklyn, you figure that you might as well head to Sheepshead Bay to see Alex Livshitz’s moustache. Your father told you about that moustache. You are curious.

Then you see it. It is a skinny rivulet of dark hairs with a bald patch in the middle that matches the apex of Alex’s head. It is oily and smooth, like a sea bird wetted by Brooklyn’s brackish waters. It is a range of hirsute hills keeping Alex’s soft chin away from his cavernous nostrils, follicular Carpathians buffeting warm European air away from Ukraine. Alex’s moustache usually bristles upwards. But you’ve heard that when a plump hand drops an envelope full of greenbacks on Alex’s tin desk, tiny, diamond dwarves, masquerading as sweat droplets, sway with aspiration. Then, Alex’s moustache dances. The moustache actually dances.

Alex doesn’t shake hands. Alex doesn’t say “hello.” Alex doesn’t stand up when you walk into his office. If you came with your fiancée and Alex were to stand, his moustache would be eye-level with your fiancee’s breasts. Instead you are here alone. You are sitting on a low stool across from Alex and the famous Livshitz moustache is staring at your forehead. His nose is sniffing you. The whites of his big brown eyes are filling with red rivulets. His teeth are chewing a lit cigar. Livshitz growls:

“Do you know why Russians love me?”

You do not yet know why Russians love Alex Livshitz. You sit across from Alex’s tin desk as the afternoon sun eclipses his five foot spherical frame. Behind Alex is a spotted, floor-to-ceiling window overlooking Sheepshead Bay. Anglers in small fishing boats are readying gear to hunt striped bass. On the dock, a bearded Italian in a tanktop is selling sandworms for bait. And an elderly Russian couple, swaddled in Minsk furs, is pacing across the pedestrian bridge to Manhattan Beach. It’s May out; a week shy of Memorial Day.

“No, do you know why Russians love me?” Livshits growls again.

You are perplexed. You have not considered duck.

“Those assholes will not give you duck,” Alex whispers. The “assholes” leave the rotund mouth underneath Alex’s moustache and trail the smoke emanating from his macanudo cigar. The smoke lingers on the far corner of the stainless steel desk and then disappears into the warm, hairy embrace of a Tajik rug lapping at Alex’s socks.

Alex points at you with his pinkie fingers, fingerlets, really – both stout and black with hair. Alex’s hirsute digits don’t much look like the photos of hummingbirds you’ve seen at the Bronx Zoo, but you keep quiet.

“They will fry you a hummingbird with feathers.” Now Alex is shouting again. “They won’t even deflower the hummingbird for you. Your guests, they will have feathers in their mouths.”

You want to tell Livshitz that deflowering has nothing to do with feathers. Not as far as you know. “But what do you know?” Livshitz’s hands would ask you and his mouth would immediately respond, “I know, I know.” In any case, Livshitz isn’t listening to you. His moustache is in heat. It’s foaming spittle.

You do not know what to say to the moustache. You do not even know what exactly duck confit is. You wish your fiancée were here, holding your hand, instead of in the belly of the L’Enfant Plaza Hotel, learning the arcane art of induced comas.

So you ask what your father told you to ask. You ask, “What about the vodka?” Alex’s moustache stretches like a hungry cat.

“So Grey Goose,” you say and Livshitz corrects you, “Just like.”

You’ve lived in America for twenty of your twenty nine years. What do you know about vodka? “Just like” sounds just fine to you.

You look at the off-center photo of a giant platter filled with what look like crushed berries.

“Red and black?” you ask, remembering your father’s words.

“Only red,” says Livshitz, “trust me,” he says, “the black caviar spoils too quickly. Every wedding with black caviar, the guests go home with diarrhea. Some wedding! I’ll give you extra red instead. You know the saying, ‘Better red than dead,’ right?” Alex laughs, his moustache hairs falling over the top of his brittle, lousy teeth.

“And take a look at this,” Alex turns another page, “now this is really something. Isn’t this something?”

You see a honeydew melon, sliced in half and mutilated by phantasmagoric zig-zag formations.

“A melon swan on every table!” yells Alex. “Who needs flower arrangements when you have a melon swan? Two thousand bucks saved right there.”

You try to spot the swan in the melon and you just don’t see it. But that doesn’t mean it’s not there. You recall your middling scores on the fifth grade Iowa Test of Basic Skills. You’ve never been good at spatial perception or arithmetic for that matter.

Alex is flipping furiously through the album.

“Here’s the best thing – you’ve never seen anything like this.”

You don’t know yet what Alex is about to show you but you already nod as if to agree that you’ve never seen it.

“Every wedding has a vodka slide,” says Alex. “Well, here,” Alex takes a long pause as his moustache lovingly kisses the cigar, “Here we have the jumbo cognac slide, the jumbo ice sculpture cognac slide!”

Alex jabs his pinkies at the photo. You look at the picture and see a little boy fashioned out of ice urinating pale yellow liquid into the guests’ tumblers.

Your fiancée wants to get married in a small mountain-top ceremony somewhere upstate-ish, in Cold Spring or Garrison or Rhinebeck. A small family ceremony, a rabbi in a sober black Presbyterian suit and the majestic Hudson flowing quietly through this Thomas Cole landscape.

But how can a family ceremony be small? You think of your uncles and your aunts and your cousins in California and Canada and Australia and Israel. You think of your Uncle Misha, who favors yellow shirts and sparkling Magen David medallions. You think of your computer-programmer cousin Ilyusha, who straps both an i-phone and a blackberry to his Versace trousers. You think of your great-aunt Pesya, whose Parkinsonian palms shook pebbles out of buckwheat groats and doused you with cod liver oil before you could remember yourself.

And then, the Livshitz moustache whispers to you: “I live this shit,” it says, thrusting its follicles backwards at Sheepshead Bay. “I know Russians. Leave your Russians to me.”

And you know then that you will leave your Russians to Alex Livshitz. He throws out a number and you retort with a number fifty percent lower, like your father told you to do. Livshitz throws out another number and eventually you meet in the middle. Only not quite the middle because arithmetic is not your strong suit. You reach into the extra-deep inside pocket of your father’s blazer, which he lent you for this occasion, and you withdraw a small, fat envelope packed with fifty one-hundred dollar bills: the deposit.

You plant the envelope on Alex’s desk and then you see it. You see it and it’s more majestic than you imagined. You can’t tell if it’s doing the tango or the rumba or the lambada. Rhythm has always eluded you. But you can see that the moustache definitely dances. Oh how the moustache dances! You look at it and you wonder if the moustache will dance in the decades to come. Will it do a polka for a bris? A jive for a bar mitzvah? A graying waltz for those future weddings when you will be the one lending your blazer? You look at the dancing moustache and you can’t look away.

So you ride the B train back to the city and think of what you will say to your fiancée in two days time, when she bursts through the door with a purse-full of colonoscopy brochures. And you remember your first date, three years back, at a Korean place over on St. Mark’s. You remember how you looked at her eyebrows, dark-blond and coiffed, ringing her blue eyes like inverted smiles, even after a 36-hour ICU shift. And you remember how she looked at you over that jug of watermelon soju, how she looked at you even after you dropped that jug into her bibimbap bowl. And you remember thinking, as the soju sizzled off the boiling rims of the stone bowl and rained ochre droplets onto her white Donna Karan turtleneck, that there, there, is a woman who forgives…

Vladimir Kleyman was born in Chernovtsy, Ukraine and grew up in Atlanta, Georgia. He now lives in New York City and is working on a collection of short stories.