Anna K. Andrade, translator and fiction writer, was born in Brazil and moved to New York City in 2000 to attend City College in order to obtain a master's degree in creative writing. She has had short stories published both in Portuguese and English, the most recent being "A Daughter's Secret" in the fiction anthology Coloring Book . She currently teaches intensive writing at Borough of Manhattan Community College, and The College of New Rochelle.Email Anna at luizroquefilho@gmail.com 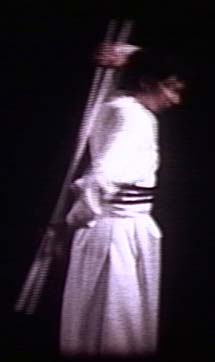 Your First Thoughts: I am specifically interested in books and authors from very diverse fields; they end up influencing the things I do, because I work directly with fiction and projections of reality. These days, a book that has caused a great impression on me is the Arabian collection of stories by unknown writers, Arabian Nights. It has been translated straight from Arabic to Portuguese for the first time in 2005 (the first translations were done from the French or English versions). This edition is the result of the dedicated work of a translator that brings both his research and the previous editions of Arabian Nights into context.

The Influence of Arabian Nights On Your Art: I've just finished reading the first eight volumes of the book (the first one tells the story of the Syrian branch); they contain the first 170 nights of Sheherazade's impressive stories. What struck my attention the most, and what is certainly a strong point of connection with my works, is the incredible “oneiric narrative” present in the stories. The reader is strongly enveloped in the chain of events (the nights, in this case), which are always short and charming. The way animals and plants are regarded by the Islamic world is enchanting. The intelligence of these characters - animals and plants - is never underestimated, and many times they are the ones that establish an ethical pattern for humans. This kind of process guides some aspects of my work.

In one of my videos, BRACNER, a king (who is in reality a horse) imprisons his wife and three daughters inside his own eye as a form of punishment. The entire movie was made in a dark room. You can imagine my surprise when I read a passage from Arabian Nights that depicts a very similar situation: a powerful entity who is half human, half animal, imprisons his bride in a box in an endless time.

In the video ESTUFA (Greenhouse), I establish some form of communication among plants that is done through smoke. There is no human figure in it, which is something that is slowly becoming a constant in my videos. The geometrical compositions and the arabesques with floral motives present in the Islamic art impress me greatly.

My choice of this book has also to do with the specific context in which an interview was requested for publication on an American web site. Just as there are sites-specifics, there are also “texts-specifics“. Arabian Nights shows us a triumphant version of woman in the Islamic world. Sheherazade entices us continuously with her cleverness, beauty, and sensuality while telling us, each night, an intriguing story full of suspense and fantasy. This book portrays an important dimension of how a woman is viewed in the Middle East. It is equivocal to try and compare a woman from New York and another from Istanbul, for example, when it comes to cultural patterns. I don't comply with the way the female sex is generally treated in certain countries, but it's strange to see how unable Western societies are to accept that many women can be happy living under conditions that are completely contrary to their supposed "liberties". Sheherazade might be one of the most sensual women we have heard of. Perhaps if Condoleezza Rice spent less time with the Bush family and dedicated more of it to enlightening readings such as that one, things would be a little bit different.

Your Work Now: I am currently finishing up my most recent work on video, which is called PROJETO VERMELHO (Red Project) and will be in the namesake exhibit in April of this year at the Video Library of the Federal University of Rio Grande do Sul, in Porto Alegre. In that video, I register a phenomenon known as "viraçá£o" (which derives from the word "virar", meaning "turn" in English), or "nada" (the nothingness) that happens in high-altitude areas, more specifically the small town of Sá£o José dos Ausentes. "Viraçá£o” happens when clouds completely bar the view. We are immersed in the cloud and can see nothing besides the immense whiteness. I used 16mm film, in order to bring out the widespread local landscapes with its many canyons, mountains, and very long plains. Inside the “nothingness" I inserted small quantities of red smoke, which generated new clouds in our homogeneous field of vision. Parallel to that, I participate with four other artists in a collective occupation project in a very unique architectural gallery at the Usina do Gasá´metro Cultural Center: this space used to be an ancient wing of a power plant that now houses cultural manifestos and is also located in the city of Porto Alegre, where I live and work. None or the artists started out with a ready project for this exhibit; we hold weekly meetings in order to discuss how we will formalize the occupation.

Luiz and FriendLuiz Roque Filho was born in Cachoeira do Sul (South Brazil), 1979. He received a B.A at the Fine Arts School of the Federal University of Rio Grande do Sul (1999-2004). He lives and works in Porto Alegre, Brazil.

Anna K. Andrade, translator and fiction writer, was born in Brazil and moved to New York City in 2000 to attend City College in order to obtain a master's degree in creative writing. She has had short stories published both in Portuguese and English, the most recent being "A Daughter's Secret" in the fiction anthology Coloring Book . She currently teaches intensive writing at Borough of Manhattan Community College, and The College of New Rochelle.Email Anna at luizroquefilho@gmail.com