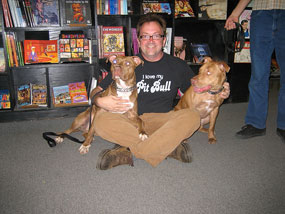 Not a Sunday night goes by when I don't think of Ken Foster. As I stand behind the duct-taped podium wedged in the corner of the KGB Bar, just as I am about to introduce the authors, I think: Would he approve of my selection? Ken Foster founded the Sunday Night Fiction Reading Series and edited The KGB Bar Reader. The standard he set for literary excellence is high. Ken now lives in New Orleans. I caught up with him by email.

Suzanne Dottino: From literary impresario to pit bull advocate! Can you talk a little about this unusual trajectory?

Ken Foster: Well, James Thurber had a pit bull, and so did Steinbeck, so maybe its not so unusual after all.

SD: Who or what was your emotional rescue before you started rescuing dogs?

KF: This sounds corny but I'd say literature. When I was a student at Columbia's writing program and living in New York City, I was so completely submerged in the world of writing—which isn't quite the same as the real world. But I'd be in class all day, and I worked full-time at Barnes and Noble in the café at 82nd and Broadway, and I interned at Serpent's Tail and The Writers Voice, and I ran the series at KGB and I would sit up late at night writing, somehow. I don't know how I managed to do it all, although I do think I get more done when I have less time to do it. At the time I felt like I had this one opportunity to learn everything I could, so I was just constantly sucking everything in.

When I did a three-month residency in Costa Rica, I thought I'd miss the whole New York literary scene. But I didn't. And that is when I fell in love with dogs.

SD: Pit bulls get such a bad rap. What would it take to change people's minds?

KF: Most people don't know what a pit bull is and they certainly don't have any idea of their history. Yet everyone has a strong, certain response when they hear the words “pit bull”. This is one of the reasons that, as a writer, I find the subject of pit bulls so fascinating. They inspire such outrageously emotional responses from people on both sides. And, of course, I love the dogs themselves. But to change people's minds is difficult, because no one really wants to listen. I bring pit bulls to events, or I insert a casual reference in conversation. I try to present them in a very ordinary context--instead of taking a hyperbolic tone, such as “Can you believe this is a pit bull? Isn't it remarkable that he's so well behaved?” There's actually nothing extraordinary about a friendly pit bull; what is unusual is a pit bull who isn't well behaved. But the bad ones tend to be the only ones we hear of in the media.

The unfortunate thing is that the climate of our country makes it possible for politicians to ban and euthanize pit bulls and other dogs under the guise of making voters safe. And again, this disturbs me not just because I love the breed, but also because it is such a great example of the illogic of our politicians.

And all of this is why I'm planning to write a big, social history of the American Pit Bull Terrier.

SD: Hurricane Katrina, you were involved in he evacuation. Could you share a particularly memorable, funny or profound incident or observation?

KF: Well, I evacuated with my dogs, so I don't know if I'd term that as “involved”...but there were some things in the midst of it all that were pretty funny. One was that in traffic on the highway, I kept finding myself next two vehicles: a man in a pick up with a Chow and a miniature pincher followed by a woman in a car full of birds. And I just knew that they must be together.

Also, my dogs and I ended up in a town in Mississippi that was hit by the eye of the storm. We evacuated in the wrong direction. A tree came through the roof, and we spent a few hours huddled against the floor with a friend and her cat. When the dogs suddenly noticed the cat next to them, we knew it was a sign that the storm had finally passed.

SD: What do you love about New Orleans?

KF: I like that people have real, full lives here. No one is their job—people have hobbies and side gigs, no matter what their field, although that is changing somewhat now that we have so much work to do. There's still a lot of spontaneity—you can leave your house to get a quart of milk and end up going out to dinner and hearing a great set of music before you get home. And, the food, of course, is amazing. Even the bad food is good.

SD: Are people holding onto what once was?

KF: Its hard, because there isn't much of a sense of direction, so people don't know what to hold onto, and many lost everything, so it is hard to know where to begin. The result is that there's a whole lot of thought going into every little decision, and what it means for the individual, and what it might mean to the community, and that cuts some of the spontaneity. But I just bought a house, so I must not think it is hopeless.

SD: You are very engaged with your readers, much more than most authors. Can you describe a particularly interesting encounter?

KF: I get letters and photos—almost every day. And people call me at home, and on my cell phone. Usually they just want to thank me, or ask a question, which is fine, but it always freaks my friends out. When I first started getting so many letters, I wasn't sure how to respond. I felt a responsibility and at the same time, I also felt like I need to maintain a degree of . . .something normal.

The strangest letter I ever received was probably the one from a woman who said she was so engrossed in my story that she didn't notice her dog had escaped her house and been hit by a car. I really didn't know how to respond to that one.

SD: Could you tell me a little bit about your early experiences at KGB? What was the reading scene like then? Was there even a reading scene?

KF: There was a reading scene, but it really was mostly poetry in cafes. Limbo, a café on Avenue A, had a nice series of prose that was curated by Jamie Linville from the Paris Review, but most of the readings were poetry or they were in more formal settings. And that may be why the KGB thing took off. It was a place to read prose, and drink and smoke at the same time. And then, a few years later it seemed every restaurant and bar was trying a reading series of some kind.

The first reading was Elizabeth Wurtzel from Prozac Nation and Lawrence David reading from his novel Need. There were about 30 people there. A few weeks later I put together a night of New Yorker fiction with A.M. Homes...and I can't remember who else. It was insanely crowded with people sitting on the stairs and the fire escape. A lot of people in those early days had never been in the bar before, so they were really into all the memorabilia. A.M. Homes said she felt like Emma Goldman when she got up to the podium. (And the podium was taped together back then. I had to hold the electrical wires in a certain position to get the light to work.)

SD: Were you the first person to have a reading series at the Bar?

KF: I think there had been a few events or parties at the KGB and then the owners thought it would be a great way to drum up business, so they put some flyers around asking for a volunteer. I had no idea what I was doing, and I think that was the key to my success. I just called people and asked them to read and asked them for suggestions of other people and figured out how to get publicity. And through that the city began to feel much more like a small town—the community around the KGB readings became very familiar and supportive of each other, which is another reason it became such a fast success.

SD: When you hear about the proliferation of readings that take place in one week at KGB and now the website, do you think . . . Wow, look at what I started or . . . ?

KF: It is kind of baffling—in the best possible way. But when I started doing readings there back in 1994, it really was this little dive and when it became a big deal it was kind of crazy to me. People would send unsolicited manuscripts from all over the country in hopes of being discovered and there was definitely a sense that people felt I had a obligation to them, as stubborn insistence that I owed them a slot, and who did I think I was, etc. And I was always thinking—it's just a smoky little bar: get over it.

But it was good training for dealing with pit bulls.

SD: How much of your time is spent rescuing and how much is spent writing these days?

KF: I just moved—from the “upper” Ninth Ward to the lower Ninth, so I spent most of the summer dealing with real estate, and the past month moving, and now I'm on tour. So there hasn't been enough writing or rescuing in my life. But I'm putting together a series of pit bull health clinics that will hopefully start by the end of the year, and working on getting a writing schedule established. In the afternoon, I teach at NOCCA, the high school for creative arts. So I get up about five, run around with the dogs, and then get some work done before heading across the canal to school.

SD: What are you working on now?

KF: I have a stack of stories that I'm starting to revise—really odd, blunt stories, some of which have incidental elements of life after the storm. A few have just started appearing in magazines, but I have more to finish and send out. I hate submitting stories, so that is a huge challenge for me. And I have the pit bull book to work on. And I have to finish my Ph.D.

Ken Foster is the author of the bestselling memoir, The Dogs Who Found Me, and a collection of stories, The Kind I'm Likely To Get, which was a New York Times Notable Book of the Year. He is also the editor of two anthologies: The KGB Bar Reader and Dog Culture. His work has appeared in The New York Times, The Bark, The Believer, Urban Dog, Salon, Fence, Flaunt, and other publications, and he has appeared as a guest on National Public Radio's "Fresh Air" program with Terry Gross, WGBH's "Morning Stories.” He is most recently the author of Dogs I Have Met: And the People They Found. He lives in New Orleans with Brando (a Dane/pit bull), Zephyr (a rottweiler/shepherd), and Sula (an American Pit Bull Terrier)