Suzanne Dottino received her MFA in writing (nonfiction) from Columbia University. Her work has appeared in The American, http://www.theamericanmag.com/article.php?article=2817&p=9 Esopus.com, Heeb.com, The Bloomsbury Review, The Brooklyn Rail, Brooklyn Review, Portable Muse. Her plays have been produced at The Culture Project, Artists of Tomorrow Festival, Horsetrade Theater and was a finalist in the Samuel French Short Play Competition. She is the Literary Director for Sunday Night Fiction Series at KGB Bar. ***FOR QUERIES REGARDING FICTION SUBMISSIONS, EMAIL: suzanne@kgbbar.com *** 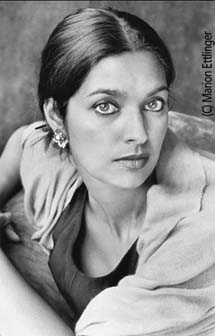 I met Jhumpa Lahiri when she read from her novel, The Namesake , at KGB Bar as part of the Sunday Night Fiction Series along with Susan Choi (author of American Woman). Jhumpa arrived carrying her firstborn wrapped in a blanket followed by her husband who was carrying a generous supply of baby paraphernalia. Patrons of KGB are used to being in the presence of prize-winning authors reading from their latest work, so what was it about Jhumpa that caused the silent but collective: hush, she's here, as she entered the room? One guess is that she has the presence and graciousness of an Indian princess, not to mention the fact that she is a charismatic and compelling reader.

After her reading we spoke just briefly. With one eye on her child, and the other on the business at hand, I felt her pull of responsibilities. I thanked her for taking time out of her demanding schedule to come and read at KGB. She smiled, exhaled, and with both eyes attentively focused on the past, she spoke nostalgically of KGB Bar specifically and of the Lower East Side in general as places where she and Susan met to exchange and discuss their writings. So many things have changed in her life since then: she published Interpreter of Maladies, which won the Pulitzer Prize, published The Namesake, and is now married with two young children and living in Brooklyn. This e-mail interview begins with an inquiry into her latest new project.

Suzanne Dottino: You've recently been elected to serve as Vice President of PEN. What are you hoping to accomplish in your role?

Jhumpa Lahiri: I've always admired the work of PEN. I was honored to become a member and even more honored to be elected to its board. In my term as vice president so far, I've had the opportunity to observe more closely the remarkable range and relevance of PEN's programs. I hope, in whatever way I can, to support PEN's mission and its many activities around the world.

JL: The fundamental impact any writer can have on the world is to write honestly and well. And in order to aspire to write in such a way, the writer must be able to express himself or herself in an absolutely uncensored, unhindered environment, and to obey no authority other than what the work demands. This is true in any culture, and for all literary traditions.

SD:Your novel, The Namesake, is being made into a film directed by Mira Nair, (Vanity Fair, Monsoon Wedding) with a screenplay by Sooni Taraporevala (screenwriter of Mississippi Masala, Salaam Bombay). You are also an actress in the film! What's the experience like of being on the set and seeing your novel brought to life in another medium?

JL: I'm an extra in the film--I don't think that qualifies as acting. My entire family and many members of my extended family in India also appear briefly on screen. It gives the film a very personal quality for me. I had never been on a film set and was utterly fascinated by the process. I have never been able to watch a movie since then without thinking about what a tremendous effort it is to create the final illusion of a finished film. I've seen a rough cut of The Namesake and love it. Mira understood my book completely, and she also made the story completely her own.

SD: Who are the writers that inspire you most? What are you working on?

JL: Tolstoy, Chekhov, Virginia Woolf, William Trevor and Mavis Gallant are some of the writers I turn to again and again. I am currently working on another collection of stories.

Suzanne Dottino received her MFA in writing (nonfiction) from Columbia University. Her work has appeared in The American, http://www.theamericanmag.com/article.php?article=2817&p=9 Esopus.com, Heeb.com, The Bloomsbury Review, The Brooklyn Rail, Brooklyn Review, Portable Muse. Her plays have been produced at The Culture Project, Artists of Tomorrow Festival, Horsetrade Theater and was a finalist in the Samuel French Short Play Competition. She is the Literary Director for Sunday Night Fiction Series at KGB Bar. ***FOR QUERIES REGARDING FICTION SUBMISSIONS, EMAIL: suzanne@kgbbar.com ***