Heaven Help Us, Heaven Forgive Us 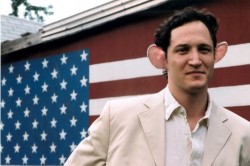 His wife suggested they trade-in for a shorter fat man.

Of course, he’d already investigated that.

There would be a connection fee—the equivalent of about a year’s worth of heating bills—and as it turned out, their fat man was only 5’4”, not 5’6”, and since 5’2” was the smallest model, the trade-in was pointless.

“Don’t patronize me and I’ll talk to you.”

J.T. didn’t answer—walked into the kitchen and picked up an orange; citrus had been terrible for ten years, and all of a sudden, it was delicious.

His wife glared at him.

“I already investigated that,” he managed.

“I don’t want to explain myself.”

After they argued, and he explained himself, she retracted her suggestion, and the problem of the fat man was once again unresolved, without even a notion of resolution, without even much chance of rising to the level of conversation. Like any young family—a daughter of two, a son of four—some conversation had to be foregone, some battles, forfeited.

The fat man had straight black hair, matted down in a Hitler bowl cut. J.T. attended the hairstyle himself. Twice a month, the serviceman dropped in to swab the fat man with a mild bleach solution. So the fat man was very, very pale.

J.T. brought him down a carton of pre-sliced white bread. Twelve loaves. On sale at the supermarket. The bread had no actual flour in it—mostly sugar and wood pulp—and some of the cartons were flattened, and others had been eaten into by mice. J.T. had taken the time to find a better carton, one in reasonably good condition, but when he got home he discovered there was a mouse hole in it after all.

The fat man reached into the box—pulled out a bag. With watery eyes and shaking hands, he unwound the tie. He spat on the slices and pressed the dough into fist-size balls, which he nibbled with his hands close to his face, as if by smallness he could diminish the problem.

Around his abdomen, the fat man’s rolls had slackened into a single sheet. The fat man had cast aside his lap blanket, and J.T. was shocked at the sight of the fat man’s legs—thin and atrophied, skin withered and unstretched, like an old balloon deflated.

Below the knee of one of the fat man’s folded legs, J.T. had seen an ankle reposition itself, creased wet skin touching the air for the first time in—for the first time since J.T. and his family had moved in, four years before.

That flesh, pink and raw like an abrasion, had probably never touched air before. J.T. had always wondered if the serviceman swabbed the cracks.

J.T. knew that was a bad sign. For the fat man to have any sensation at all in his epidermis—J.T. had read all about it. Not a good sign.

“You have nothing to worry about,” said the fat man.

Sitting on the porch, looking down into the misty valley, his children in the green grass, his wife at the bird feeder, doing something over there—all was right with the world. That the fat man was overheating the house—no cause for anxiety.

He, J.T., was a man. And the best thing about a man was his silence. His wife didn’t understand: a man’s work, a man’s words, were his flesh.

All the effort, all the hours, day in day out, that the world sucked out of him. All that nature took in trade for a happy family, for checks with his name scrawled at the bottom. How could a woman, with all her cooing words of consolation for her children, ever understand that all a man really wanted was peace?

It wasn’t like they’d said. The greenest grass was on his own side of the fence.

J.T. felt sick when he walked into the house—a perfect 68 degrees. Sick at his sternum, like he was simultaneously suffocating and throwing up.

The thermostat delivered the bad news; it had reset. From 45 degrees, the vacation setting, to 68 degrees, the “standard” setting. The fat man—for two weeks, the length of their vacation—had been subsisting on 2500 calories a day. Twenty-five hundred calories a day, at 45 degrees, was 1300 calories over the recommended allowance; J.T. had expected the fat man to put on seven to nine pounds. But at 68 degrees, the recommended allowance was well over 6000 calories; the fat man had lost close to 50,000 calories. J.T., grimacing like the bullet hit his groin, staggered to the basement door. Down the stairs—the steep wooden staircase—he held the rail and hoped.

And unbelievably, the fat man didn’t look too bad.

The fat man lifted his head:

J.T. heard his wife calling to him from the kitchen. She had the serious tone of voice that told him to ignore her.

“When did they start making marinara?” J.T. processed the data—open a can of tomatoes, cut up the basil, put the swill in the microwave, six minutes—there was no way all that had happened since they walked in the door.

“Oh that sauce was frozen,” said the fat man. The frozen sauce J.T. remembered smelled like sage, not basil.

The fat man shook his head no—

J.T. had always thought of the basement stairs as a last line of defense, but they had failed him.

“How the fuck did you get up the stairs?”

J.T.’s wife was calling him from the top of the stairs. She was asking about a second frozen tub of marinara.

“I thought it’s what you would have wanted,” said the fat man. “I was … I was wasting away.”

J.T. called in the serviceman to see that the fat man had reconnected his vents properly.

“You’ve got an expensive problem,” said the serviceman.

“Could I replace him with a dog?”

“Shoulda been a dog in the first place.”

“Maybe I could pick up a unit and we could do something off the record.”

J.T. was reaching for his wallet.

“I’d like to help you out, but I’m not gonna take your money and do something that’s not gonna work.”

“Listen, I’m being straight with you. A dog isn’t gonna work. Not even a big dog. Their respiratory levels are just too low. All your vents, all your plumbing, it’s way too big. You’re not gonna have any pressure. You’re just gonna have a warm basement.”

“What about a woman?”

“Wish I could help ya, they don’t come in females.”

“So we’d have to redo all the vents?”

“Yeah,” said the serviceman. “I’ll do it. Tear up the whole house, though.”

J.T. opened the basement door, started in, but the serviceman kept standing there.

J.T. pulled five bills out of his wallet.

“There is maybe one thing I could do. I mean, I wish I could, but I can’t risk my job.”

Every day, he walked, he drove, a piece of crap nobody cared about. At home, his wife talked to him about things he didn’t want to talk about until, over the course of the week, he got so resentful she’d have to have sex with him.

The serviceman had explained the “patch” to J.T. The injection would destabilize any tissue within an inch of the tip of the needle. Bone, flesh, cartilage: to jelly.

“Oh my God, please, please,” pleaded the fat man. “I won’t walk again—I won’t I never will I swear I swear to God.”

The serviceman readied the syringe, plunged the needle into a vial and drew a viscous gray fluid into the barrel.

“Will I still be able to feel my legs? Not too far up the thigh, ok? Please. Please.”

“His expression will never change again,” said the serviceman—