Girlbomb: An Interview with Janice Erlbaum 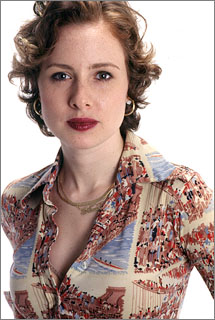 Full disclosure: I have known Janice Erlbaum for over a decade. I first met her in the mid-nineties while she was performing with the all-female poetry group The Pussy Poets. One of the best writers on the spoken-word scene, Erlbaum stood out because of her deadpan delivery and masterful stage presence. Given her easy rapport with an audience, it was not surprising when she began doing stand-up comedy a few years later.

Erlbaum's memoir, Girlbomb, explores the delicate and explosive territory of her "halfway homeless" teenage years. At fifteen-years-old, she left her mother's Brooklyn home after an argument and became a resident of Covenant House, a shelter for homeless teens. Entering Covenant House, she had no idea she was about to embark on a journey that, two decades later, would culminate in the creation of one the finest tales of American female adolescence.

With my personal knowledge of the author, I was afraid, that I would insert the Janice I knew into the narrative of the story. This was not the case. One of the most impressive aspects of Girlbomb is the author's ability to turn herself into a uniquely flawed and sympathetic character with wit and insight throughout.

Erlbaum and I recently met one afternoon near her home in Manhattan. I began our lively interview with a "hack" question, asking her how long it took to write the book. She gave me a short, "hack" answer - 36 years, her lifetime. The real answer was more complicated, though: "It took a year to write the first draft,” she said, “which I thought was the final draft. That took three months to get rejected all over town, another three months for me to fall into existential despair, then three months for me to write a proposal - which included the first three chapters - then about six months to write the rest of the book. So the second draft took about nine months, with a little polishing at the end."

Before sitting down to write her book, Erlbaum loved performing both poetry and comedy in front of an audience. "I'd rather watch bad comedy than bad poetry,” she said. But at the same time, poetry tends to err on the side of the politically correct, and comedy tends to err on the side of the homophobic, racist, sexist and just soul-crushing. So, it's a little bit of a toss up. Which do I like doing better? Comedy. It's just fun and such an art form and you're not on the page: you're in people's faces."

I wondered what impact her years of doing spoken word had on her current writing. "It got me in touch with my own very colloquial voice," Erlbaum said. "When you write, there's a sense of formality about it, like this is going to be here forever so it better be good. [That sense] is not there in speech. So I feel like it gave me license to be more spontaneous, to be more natural, to think about breath, to think about cadence - and to be funny. Hopefully, I learned from comedy how to be dry. It gave me a tremendous amount of confidence, and that great instant gratification you don't get from writing a book. It keeps you going, like people cheering during a marathon." Erlbaum is also a columnist for the popular women's magazine BUST. Her column "News from a Broad" covers topics such as the war on reproductive rights and gives suggestions for activism. "I latched onto lefty virtues early on," Erlbaum said, stating she has always been a feminist. "In high school, I started to come up with a little manifesto that I wanted to have included in all tampon boxes, like instructions that would only go to women. That's how we would communicate."

Erlbaum had touched upon her adolescence in her early performance pieces and in her 1994 chapbook “Girlbaum” there is a short story entitled "Shelter Happens" about living in a homeless shelter for teens. Incidentally, "Shelter Happens" is also the title of the first section of Girlbomb. I asked her what the impetus was to write an entire book about her adolescence. "I wasn't going to write a book about my adolescence," she said, "I was going to talk about the girl-on-girl sex games I played as a seven-year old. I was going to talk about failed friendships in my late twenties. But people didn't want to hear that, they wanted to hear about my adolescence. Really, they were right - that was the defining moment of my life. I realized if I'm going to write my memoir, it's all about having been halfway homeless, about living in the shelter.”

There's a lot of sex and drugs in Girlbomb. I easily lost count of the amount of substances ingested and the number of boys dated but I got the feeling that through all of this, the young Janice was just looking for love. During our interview, the adult Janice agreed. "I was looking for romantic love but I was also looking for family and community. The sense of being part of a group, even more than romantic love. I was really looking for a home of my own. So I could start my own family." 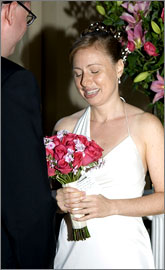 Now, over twenty years later, Erlbaum returns to Covenant House as a volunteer (she chronicles some of her volunteer experiences on her blog, where she refers to herself as the "Bead Lady" because she helps the girls make jewelry. When Erlbaum began volunteering, she was working on the second draft of Girlbomb and felt like she needed to go back both "creatively and emotionally." She also joked she wanted "to find somebody just like I'd been and save her life. Nothing big." She befriended and mentored one of the young women there, and this friendship is the basis of her as yet untitled second book.

I wondered if the young women whom she sees there differ much from the girls she knew when she was a resident. "No, they don't differ. They're the daughters of the girls that I lived with. There are a lot more transgendered girls and boys which we didn't see so much in the '80's. And I have to say, it's almost heartening. A lot of those kids were suicides back then, or lived lives that were much more constrained than they are now," she said. "They have the same problems and the same strength, resilience, optimism and honesty. They're so much more honest than adults. So much more self-aware. They can talk so honestly about their own shortcomings, their own defense mechanisms and I don't want them to lose that as they get older. They're very blunt." Erlbaum would like people to share her empathy for street kids, though she still finds empathy a challenge. "It's sometimes hard to remember that yes, kids make bad decisions, they're obnoxious. They steal, they do drugs, they get into fights. They're not savory, not easy to like. They usually are in so much pain and have so much fear.

Janice Erlbaum is the author of GIRLBOMB: A Halfway Homeless Memoir (Villard, March '06). She has been a contributor to Bust magazine since 1994, and has also written for NYPress, POPsmear, and McSweeneys.net. She is featured in the anthologies ALOUD: Voices from the Nuyorican Poets Cafe, Verses That Hurt, and The BUST Guide to the New Girl Order, and she's been written about in Poets & Writers, Interview, PAPER, Harper's Bazaar, Backstage, the Daily News, and New York magazines. She once kissed a girl on MTV. She now lives in her native New York City with her domestic partner, Bill Scurry, and their three cats, and she volunteers at a shelter for homeless teens. She especially enjoys talking about herself in the third person.

Cheryl Burke is an award-winning poet and writer. Her work appears in dozens of print and online publications including; BLOOM, Small Spiral Notebook, The Guardian, Reactions 5, Pills, Thrills, Chills and Heartache, The Milk of Almonds and Poetry Nation. She has received a fellowship from the New York Foundation for the Arts and has been a resident at the Virginia Center for the Creative Arts. Cheryl is also the creator and producer of PVC: The Poetry vs. Comedy Variety Show, a monthly showcase of the best downtown poets and comedians.