Martin Riker is the assistant director of Dalkey Archive Press. He and I met on an August night after a reading at the KGB Bar—I drank a Baltika while Riker spoke about his experiences at the St. Petersburg Literary Seminars. He presented me with the anthology Contemporary Russian Poetry, a collaboration between the National Endowment for the Arts and Dalkey Archive Press, edited by Evgeny Bunimovich and J. Kates. This sparsely designed, content-rich book was my first encounter with Dalkey. In Contemporary Russian Poetry copies of the poems as they were originally published are printed beside the translations, expanding one's reading experience visually and drawing the reader away from the familiar. “It's unique to encounter, in the concrete sense, the foreign language on a page,” Riker commented. Readers find themselves thrust into the process of translation in a way they may not have expected.

Riker also gave me an excerpt from Theatre of Incest by Alain Arias-Misson. The story is told by the perpetrator of triple incest, highlighting Dalkey's subversive nature. Riker believes the act of translation itself should be subversive, especially in the United States, “since we Americans define our status quo by the culture we live in, it makes sense that writing from other countries would be well suited to this task ... it creates an instability in the status quo. And instability leads to change and change leads to new ideas. I believe this is the most significant sense in which the books we publish are subversive.” Currently, Dalkey has a list of over 400 translations, including work by writers such as Carlos Fuentes, Raymond Queneau, Danilo Kis, and Flann O'Brien.

The press is located at the University of Illinois in Champaign, Urbana where it is partnered with the International Translation Center. Its history begins with Dalkey's publisher John O'Brien. He conceived of an idea where a university program partners with a publisher and began forming it in an unofficial capacity in 2000. In 2005, John suggested to novelist Richard Powers and his wife Jane Kuntz that such a program should be an official one and be located at the University of Illinois, where Powers teaches. “The University of Illinois is the ideal place for such a program. For one thing, it has pretty considerable resources (the president just announced a budget of $3.9 billion). It has over 100 faculty teaching 30 different languages, with 700 undergraduates majoring in foreign languages and 300 in graduate studies,” Riker said. Late in the spring of this year, Chancellor Richard Herman announced at an event at the French Consulate in New York that the university was establishing a center for translation studies. 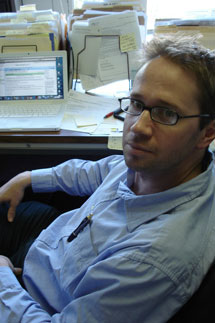 What constitutes a good translation according to Riker? “I know there is a school of thought that argues against this idea, but in my opinion, a fantastic translation reads as if it were originally written in English. It has to otherwise the book is not truly translating the experience that a reader would have in the original language. Not that this is ever quite possible to do, but it's certainly quite possible to aspire to.” Riker followed his statement with a clever example, “We have a foreign language editor here, her name is Ana, and I was saying to her the other day, ‘Ana, I sometimes think how strange it is that when you speak to your friends in Serbian, you don't have an accent.' Now Ana's English is really excellent, but I'll never experience her in the way her Serbian friends do. If she were a book, I would say that she was badly translated. As a human, of course, she's just fine.” Reading a translation, at times, is the only way we can experience a world that would be otherwise closed to us. We bring to it our own culture, just as readers bring their own experiences to books.

I asked Riker how he thinks translation fits into the realm of contemporary literature. “For me, one of the great overlooked benefits that literature in translation has given us in this country, and continues to give us, is a greater curiosity and variety in our own writing .... If you spend a little time studying literary history, you pretty quickly realize that the entire history of literature is a history of translation—one culture taking ideas and styles from another and turning them into something new.”

The relationship created when reading a Dalkey book isn't between the reader and the author, rather it is between the reader and a text that has had multiple influences. Translation isn't a solitary pursuit. It allows for collaboration in effort to find oneself within reach of the original. “At Dalkey we tend to do a lot of editorial work on a text, especially translated texts, and of course this is work that the reader will never know anything about. Readers who think they have a relationship with the author would probably be surprised to learn how many other people were involved in shaping that book,” says Riker.

Dalkey Archive provides its readers with unique experiences. Riker finally commented, “To translate is to render the sense of the original, the spirit of it, the experience of it as an original work.”