With its light tenor and hard to pin humor, Matthew Sharpe's new novel You Were Wrong is a smartly enjoyable inquiry into the unfortunate situation of Long Island high school math teacher Karl Floor. 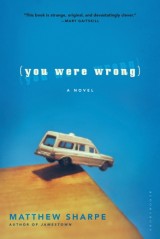 With its light tenor and hard to pin humor, Matthew Sharpe's new novel You Were Wrong is a smartly enjoyable inquiry into the unfortunate situation of Long Island high school math teacher Karl Floor. Still living in his stepfather's house at age twenty-six, clueless Floor is relatable to a degree and likable beyond it. The novel moves quickly through a pleasantly paced plot, punctuating crisp, funny dialogue and significant action with Floor's abstract and quirky reflections on subjects like mathematics, the nature of law, and being beaten up by his own students:

“Nice weather, Mr. Floor,” one of them said, and the terrible thing was, it was nice weather, and the punching began.A grown man, a teacher, beaten by two teens was grim. The central mathematical fact of the beating—two assailants—upset him most of all; five would've made it less personal; one would've given the dignity of a duel, or the randomness of an encounter with a lone psychopath; two made it intimate, a love triangle in which Karl was the odd man out.

Sharpe opens by hurtling Floor into a strange, unraveling situation that the reader tries to determine the strangeness of. Over Floor's summer vacation, an encounter with a young woman unexpectedly standing in his hallway draws him by his comically timid affections into a mess of problems more interesting than his normal life:

He felt she was twenty-four. She wore jeans and a rose-colored T-shirt over her thin, strong body. She did not have on a mask, nor was she carrying any of his family's possessions, so Karl may be forgiven for not immediately identifying her as a burglar.

Like much of Franz Kafka's fiction, You Were Wrong provides a generous opportunity to examine from all sides a hapless character's situation and—while mentally engaged, somewhat emotionally detached, and thoroughly entertained—determine just how hapless he is. But, far from Kafka's unknowable and faceless leading men, who usually speak and act without a word on how they feel, Sharpe presents Floor in embarrassing detail, from his clouded thoughts and two-bit cares to his laughably regrettable emotions and pseudo-philosophical observations. Floor throws up in front of the intruder:

“I think it's just this room that nauseated you,” she said. “There's no air in here, there's, you know, moldy sock smell. Come to the living room.” “You're inviting me to my living room?” “Yes.” His strategy with this mysterious woman would be to go with her to the living room and slowly drink the tea she made him and tell her anything she wanted to know.

The result is a novel that satisfies a reader's need for both challenging stimulation and nuance. Sharpe balances the novel's wackiness with weightiness, lightening its load, then piling more on with ease, to keep the reader comfortably on the cusp of curiosity and out loud laughs.Sharpe's deft use of cultural and artistic markers sets the novel on uncertain ground. Dull contemporary realities are held up as farcical commentary on the demographics they represent: we take a drive into the City on the BQE and hear a lengthy treatise on the cultural war waged between a Long Island basement's piano and pool table. But artistic references are delivered with plain and direct understanding: Virginia Woolf's To the Lighthouse mixes with a roofie; Star Wars hits close to home. The resulting ambiguity suggests both realism and satire, but if Sharpe is playing a game, it's a fun one, as the novel's scale shifts briskly and in continuously new ways through our culture's fiction and New York's reality.Another unknown enters the mix with Sharpe's deceptively familiar characters: a timid, underachieving guy; the cool, collected girl of his dreams; and her top dog, soulless boyfriend who is everything our anti-hero is not. Floor also comes up against a stepfather so demeaning and well-spoken that it's stunning. When Floor says he wishes his mother wouldn't play the piano while he and his stepfather are playing pool, his stepfather coolly rattles off:

“Interesting”—the boy marveled at his adversary's ability to fashion weapons from ordinary household objects such as interesting—“that we have arrived at a moment in history when these two activities can compete head-to-head in the same room of a modest family home. Had one an old-fashioned godlike view of humanity, now correctly proved immodest and false by leftist historians, one might be able to assign a clear hierarchy of value to all the leisure activities a given family could pursue, and from this vantage pocket billiards would be so far down the staircase, if you will, from serious music in the European tradition that one wouldn't think of pitting the two against each other in a battle of wills, let alone arrive at the conclusion that pool should be given precedence over Chopin. But in today's modern world, in which ours is surely not the only suburban house where a pool table and a piano sit side by side like a pair of hippopotami cooling in the river of bourgeois culture, and in which most of what goes by the name of value has been rightly shown to be a matter decided not by Nature but by Agreement, one cannot simply assume the superiority of great music over parlor sport, so as far as that goes I take your point.” He was diabolical. “On the other hand, old-fashioned though this too may sound to your young ears, I do believe there are times when the men of a household must defer to the wishes of its lady, so I advance the idea that we wrap up our game quickly and leave your mother to practice her instrument.”

Sharpe sneaks these characters in and out of their typical roles to tell a refreshingly new story of the struggles of under-established adulthood, one that is genuinely relatable despite the strong satirical streak. Floor hopes to get a lifelong romantic relationship going; he struggles, still learning to read people and situations; he realizes—first comically, then shockingly—that he's still young enough to get into a fight or two.You Were Wrong is so unconcerned with pointing out its smartness that it's possible to overlook how innovative and well-crafted it is. However, this makes it as good a choice for an analytical read as it is for an entertaining one. It is definitely worth seeing how Sharpe cultivates smart and fun in equal measure and in such a way that each seamlessly enhances the other.

Matthew Sharpe is the author of the novels Nothing is Terrible, The Sleeping Father, and Jamestown. He lives in New York City.