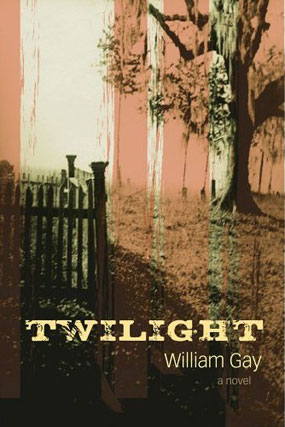 MacAdam Cage, October 2006
300 pages, $16.50
William Gay's Twilight borrows heavily from Cormac McCarthy's semi-autobiographical Suttree; it is somewhere between a homage and an imitation. Both take place in mid-century Tennessee, and both are about young men who flee into the wilderness. Cornelius Suttree's escape is more anagogical, while Kenneth Tyler, Gay's protagonist, is driven into Tennessee's tangled backwoods by the plot. Tyler is running from local psychopath Granville Sutter, who has been sicced on by the town's necrophiliac undertaker - a man whom Tyler and his sister are attempting to blackmail. But the heaviest debt Gay owes to McCarthy is stylistic. Gay attempts an impersonation of McCarthy's biblical, yet austere lyricism. While Gay turns out some very elegant prose in this guise, like all drawn out impersonations, it eventually collapses into a heap of appropriated tics. Twilight's story is simple, almost elemental. Following the funeral of their loutish, bootlegger father, Kenneth and Corrie Tyler dig up his grave and discover that he's been buried without a coffin. Investigating further, they realize that the undertaker, and richest man in town, Fenton Breece, has been cutting many corners, and they steal photographs of him at a tea party with a host of nude female corpses. When Corrie decides to blackmail him, the effete Breece hires Granville Sutter, a thug who's so terrorized the locals that no jury will convict him. Tyler must cross the Harrikin, an undeveloped patch of wilderness populated by hermits and crones, to reach the nearest sheriff not in Sutter's thrall. As Sutter pursues him, he drifts further into madness, devolving into the sort of unstoppable killing machine you suspect won't be dead the first time.

Gay chooses to tell this story in elevated prose, with elongated, poetically tripping sentences punctuated only by their own natural rhythms. His metaphors are suitably grand, repeatedly evoking a prehistoric wasteland created by "some dark god" and torn apart long ago in Armageddon. Gay, however, doesn't seem to share McCarthy's faith in this biblical vision. His sensibility seems more modern, almost campy. Breece is played largely for laughs; his necrophiliac fantasies are shaped by the corny radio soaps of which he's an avid fan. Sutter's viciousness becomes more intentionally cartoonish as he grows mad. And Tyler himself is much more of a likable rascal like Huck Finn than a tortured neurotic like Suttree. Gay's dialogue is also much more earthy than his prose. It's his strength, and as long as his characters are talking, it's an entirely different book, hardboiled and realist. Unfortunately, Tyler and Sutter both spend much of the novel alone in the wilderness, where they come to face some sort of existentialist horror that never quite takes shape.

The problem with the heaviness of the prose isn't just that it doesn't match the lightness of the plot or dialogue. Gay is only able to strike the same ominous note in a limited number of ways, and as the book ends, we have heard the same vocabulary, the same metaphors, and the same phrasings a few times too many. It's a weird concoction, sort of an apocalyptic rural noir, and Gay is only able to sustain the varying tones briefly. At novella length, Twilight ends just as he is losing narrative control, but soon enough that the book is never boring.

William Gay lives in Hohenwald, Tennessee. He is the author of the novels The Long Home and Provinces of Night, and the short story collection I Hate To See That Evening Sun Go Down.

David Hunter graduated from Vassar College in 2001 with a degree in Literature.