WHY GROW UP? Subversive Thoughts for an Infantile Age by Susan Neiman 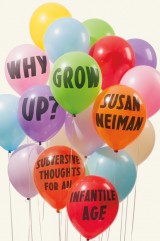 Susan Neiman's lively treatise on the how modern society celebrates the trappings of youth and rejects the stigmas of adulthood, Why Grow Up?: Subversive Thoughts for an Infantile Age (Farrar, Straus & Giroux), doesn't limit itself to finding the incentives to be found in embracing the march of time. Early on, Neiman acknowledges that the ‘why' of growing up is dependent on the ‘what' of growing up, which is vague at best and slippery across generations, a by-product concept dependent on the century and continent:

It's fair to ask whether philosophy can say much at all about a process as diverse as coming of age. Philosophers trade in general truths – some still seek necessary or universal ones – but even a little empirical date reveals that growing up is very particular...French historian Philippe Ariá¨s argued that early medieval Europeans had no concept of childhood; not until the twelfth century were children considered notable enough to be portrayed in paintings, and even then they were simply depicted as smaller-sized adults, with no difference of feature or expression

That far flung past is almost unimaginable by the current standards of Western civilization, and what is at stake in the book is very much a first world problem. The children and young adults in less prosperous nations, those who make our clothing in factories, work in fields, or do other forms of labor to scrape by, probably don't have as much time to consider whether they should stop playing video games in their parents' basement and take on more of life's responsibilities. Even in America, where the words ‘citizen' and ‘consumer' are interchangeable, the act of consuming being the primary function of babies, the luxury of being able to choose whether or not to “grow up” is very much a post war product. As the 2013 documentary Teenage addresses, the concept of the “teenager” wasn't even invented until after World War II.Seeking to expose the deepest roots of our current crisis of adulthood, Neiman looks to the Enlightenment by putting the writings of Immanuel Kant, Jean-Jacques Rosseau and others in conversation, building her ideas from there:

Coming of age is an Enlightenment problem, and nothing shows so clearly that we are the Enlightenment's heirs, whether we acknowledge that heritage or not...In an age where traditional social roles began to loosen, the Enlightenment could begin to care about individual human development for its own sake – though political concerns were never very far in the background.

Why Grow Up? astutely shows how notions of progress and development from the Enlightenment might be applied to our understanding of what adulthood means today. It also makes clear the concept of adulthood being the navigation between the “is” and the “ought”, what the world is actually like versus what we as individuals think it should be like. If at times the focus of the book seems to narrow a bit far in to, say, Kant's arguments about the limitations of David Hume's account of experience, Neiman also acknowledges that philosophy might provide a way to some answers, but not all of them. “For Kant, by contrast, philosophy's role in helping us grow up is precisely the opposite. It will not console or soothe you; it is practically guaranteed to make your life harder.”Neiman understands the spiritual value of childlike wonder, the magic in the fact that a baby's first encounter with a simple utensil can provide that new being with more awe than a grown-up might get from listening to Vivaldi's Four Seasons. For an ‘adult' equivalent, think of the character Cameron Frye in Ferris Bueller's Day Off, staring enrapt by Seurat's A Sunday Afternoon on the Island of La Grande Jatte. Neiman makes the point, though, that with that sense of wonder also comes a bundle of other less grand sensitivities, and maybe gaining experience and getting used to the world around us is not something to shun, but to embrace. Once firmly planted in adulthood, she argues, "[h]owever wrenching...experiences can be, they no longer have you feeling on the edge of abyss, watching the void between is and ought open before your eyes. You have seen it before, which means you've begun to get used to it.”Growing up isn't so bad, even in a modern Western culture -- obsessed with image, self, and expressing ideas in the shortest, tackiest ways possible -- that sometimes seems determined to lock everyone into a state of permanent adolescence. Neiman is careful to suggest a number of reasonable prescriptions for the problem at hand (education, work, travel, and one should also maybe not spend all day on the Internet), but not offer a single, simplified cure-all. There is no one single path to adulthood, and the attempt to find one's own path is as important a step to being a grown-up as any. Navigating such a path requires continual conversation with the self, much like the conversation Why Grow Up? engages in. What a luxury to be able to have that conversation at all.Susan Neiman is the director of the Einstein Forum. Her previous books, translated into many languages, include Moral Clarity: A Guide for Grown-Up Idealists, Evil in Modern Thought: An Alternative History of Philosophy, The Unity of Reason, and Slow Fire: Jewish Notes from Berlin. She also writes cultural and political commentary for diverse media in the United States, Germany, and Great Britain. Born in Atlanta, Georgia, Neiman studied philosophy at Harvard and the Free University of Berlin, and was a professor of philosophy at Yale and Tel Aviv Universities. She is the mother of three grown children, and currently lives in Berlin.