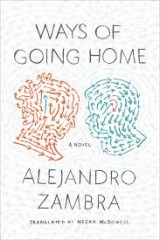 The National Stadium in Santiago, Chile, was built in 1938, and in its first decades played host to many major events, including the World Cup in 1962. After September 11th, 1973, when a coup d'etat in Chile overthrew the elected leader Salvador Allende and installed the dictator Augusto Pinochet, the stadium was used as a prison camp by the regime that would come to run the country until 1990. Tens of thousands of citizens were detained in the National Stadium, where they were held in cruel conditions, and many were interrogated, tortured, and murdered. As the narrator-created-by-the-narrator of Alejandro Zambra's Ways of Going Home (Farrar Straus and Giroux) walks through the streets of Santiago in the present time of the novel with Claudia -- an elusive figure from his childhood who he has reconnected with as an adult for a fraught romantic fling while she is visiting home from Vermont – they pass by the National Stadium:

We reach the National Stadium. The largest detention center in 1973 was always, for me, no more than a soccer field. My first memories of it are happy, sportive ones. I'm sure that I ate my first ice cream in the stadium's stands. Claudia's first memory of the stadium is also happy. In 1977 it was announced that Chespirito, the Mexican comedian, would bring the entire cast of his show to perform at the National Stadium. Claudia was four years old then, she watched Chespirito's show and she liked it a lot. Her parents refused to take her at first, but finally they gave in....Throughout the entire show they had thought only, obsessively about the dead.

In this and other passages, Zambra's novel illustrates that there are not just different ways of going home, there are different ways of being home, and understanding that home. Asked in a recent interview about that particular passage, and whether it was possible to establish a “real” version of the past, Zambra responded, “I don't believe that the process has ended, nor that it can end. I suppose that, in many different ways, the whole of Chilean society has been looking for those truths, those realities, and sharing them. I think that many happy memories later become bitter through the mediation of other memories.”In Ways of Going Home, Zambra's ‘way in' to that process of searching for that ‘real' past is buffered by the distance of using two intertwining narrative voices: an author character, and the unnamed protagonist of that author's novel. A mask, and the mask's mask. The two voices are not entirely un-similar, though they are sufficiently distinct. Perhaps because the reader gets to observe him both in childhood and adulthood, it is the unnamed protagonist who comes to feel the more ‘real' of the two. Most of the time, he feels closest to the heart of what Zambra is reaching for, and it is his half of the novel that resonates the most when the novel ends. It's an intriguing result of a clever conceit, one that takes the thoughtful and nuanced touch of an author like Zambra to successfully pull off. It does raise one question, however: in wrestling with a matter of such vast impact (felt by every man, woman, and child in Chile for two decades), and such conflicting feelings and perspectives, why risk obscuring the search for truth with the modern day novelistic trappings of layers of meta? Fortunately, it's a question that calls attention to itself less and less as the story progresses and the two voices strike a satisfying balance of lightness and poignancy. That may be at least part of the point: as the unnamed protagonist's youth was the distance that protected him from the harsh reality of what happened at the National Stadium, so does the use of multiple narrative layers allow Zambra to speak more honestly of the lightness that still happens in dark times. Not to discredit the darkness, but to make it all the more real. Alejandro Zambra is a poet, novelist, and literary critic who was born in Santiago, Chile, in 1975. He is the author of two previous novels, The Private Lives of Trees and Bonsai, which was awarded a Chilean Critics Award for best novel. He was selected as one of Granta's Best of Young Spanish-Language Novelists and was elected to the Bogota 39 list.Megan McDowell is a literary translator living in Zurich, Switzerland. She also translated Alejandro Zambra's The Private Lives of Trees.