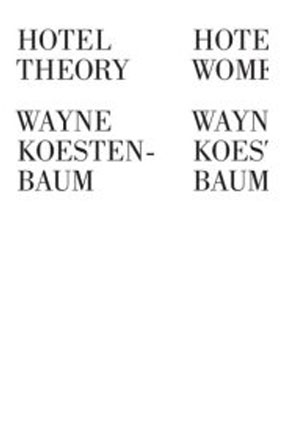 Soft Skull Press, June 2007
192 pages, $16.00Hotel Theory is Wayne Koestenbaum's new flawed but illuminating -- and surprisingly enjoyable -- theoretical exercise. The volume actually contains two books in one: a meditation on the meaning of hotels and a dime novel. The books run concurrently, in twin columns. In theory this is a pretty cool concept, but on a practical level it is impossible to read both books simultaneously. I couldn't help but wonder why the book hadn't been formatted in a style akin to Only Revolutions by Mark Danielewski, where the narratives begin at opposite ends of the book, and upside down from one another. But then it occurred to me that to be critical of Kostenbaum's book in any practical way would defeat the point. This is theory; there is nothing practical about it. However, that doesn't prevent this book from being thought-provoking, dazzling, and even entertaining.

This is particularly true of the meditation on the meaning of hotels. Koestenbaum is a wonderful guide -- he is clever and funny, and conveys complicated ideas with ease. Using Heidegger's Being and Time as a starting point, Koestenbaum loosely defines "hotel consciousness " as a kind of being here, being anywhere, marked by transience, shiftlessness, and despondency. He also name-drops the authors you would expect to see in this type of literary exercise: Benjamin, Freud, Barthes and even a little Adorno. More interesting is Koestenbaum's analysis of popular films and novels that feature hotels, including the films The Grifters and The Object of Beauty, and the novels The Red Notebook and The Great Gatsby. As Koestenbaum discusses these texts, it is almost impossible not to recall the numerous other films and books that also feature hotels: What might Koestenbaum make of Bob and Charlotte's meeting in Lost in Translation, or the narrator in Douglas Coupland's Shampoo Planet, a hotel-motel studies major whose mother stocks his mini-fridge just like a hotel mini-fridge because it comforts him?

The companion book is a dime-novel called Hotel Women, featuring Lana Turner and Liberace as its main characters. It should be noted that the words 'a,' 'an,' and 'the' never appear in the dime novel. By omitting these articles, Koestenbaum hopes to dwell in this "hotel state." This is an inspired idea and there is much to be admired, but does it work? Yes and no. Aside from a few laugh-inducing moments worthy of a John Waters film, Hotel Woman is a bit of a yawn. And yet, as an exercise, it does succeed -- and it certainly manages to highlight the seediness of hotels, which is easy to lose sight of when reading the more high-brow meditation.

Why does Koestenbaum choose to write about Lana Turner and Liberace here? Perhaps because apart from this fictionalized encounter in the fictional Hotel where they meet, they both led true dime novel lives. In real life, Lana Turner married eight times and later was at the center of a bizarre murder scandal, in which Turner's fourteen-year-old daughter, Cheryl, stabbed and killed Turner's gangster lover while coming to her defense. And of course, Liberace's notorious homosexuality and denial, along with his secondary involvement with gangster Eddie Nash would be of interest here. Unfortunately, the characters' real lives are more intriguing than the ones Koestenbaum imagines for them here.

Still, that's not to discount Hotel Woman completely. When considered in its entirety, Hotel Theory is an accessible yet challenging work.

Wayne Koestenbaum is the author of several works of cultural criticism including The Queen's Throat: Opera, Homosexuality, and the Mystery of Desire (a National Book Critics Circle Award Finalist), Cleavage: Essays on Sex, Stars, and Aesthetics; the Penguin Lives biography of Andy Warhol; and Jackie Under My Skin: Interpreting an Icon. He is also the author of a novel Moira Orfei in Aigues-Mortes and five collections of poetry.