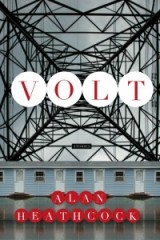 Populated by folks scraping by under the poverty line in a rural setting, Alan Heathcock's Volt (Graywolf Press) easily qualifies as country noir, Winter's Bone with fewer meth addicts. A son helps his injured father drag a body up a hill, wrapped in a handmade quilt. The sheriff of a poverty-stricken town in an unnamed, vaguely Southern state conceals the murder of a young girl while ensuring a peculiar kind of justice. A woman reeling from the violent death of her mother tries to keep local boys out of her corn maze, with disastrous results. The collection contains no happy people. It's difficult to avoid the word “tragic” when asked to describe “what happens.” My favorite story in Volt— the first in the collection, “The Staying Freight” —feels like the pattern for the rest. Having wasted weeks in grief after accidentally killing his son, farmer Winslow Nettles accelerates in front of a freight train in an effort to get ahead on all the work left undone. The train stops, and the conductor, a man with “hair white as the moon,” pulls Winslow out of the truck. They exchange words and the man takes off, leaving the freight train sprawled across the road. “Ain't gonna do it no more,” the conductor says to Winslow before running into the field, his legs pumping, his hair “white as flames.” The rest of the story unfolds with Winslow running away from home and getting wild in the woods around his town. After being taken in by the family of a hunter whose shot he gets in the way of, he becomes a kind of sideshow act—letting strangers punch him in the stomach, both for money and to expiate the guilt he feels for his son, for leaving his wife, for not returning home when he could have so many times. He does return, eventually, after a stranger finally does him damage, and though he can't explain his actions, his wife understands. The surreal quality of the fleeing conductor suffuses Winslow's own flight from and eventual return to responsibility and family and the past's wounds with a ghostly inevitability. Despite these characters' disaffection, sentence by sentence and paragraph by paragraph, their stories are told beautifully, with many striking turns of phrase. Heathcock is a powerful writer, and infuses each of the eight stories with the sense that catastrophe is inevitable, and personal. From “Lazarus”: “So much of a life they'd shared, so many laughs, so many touches. But there were things people should never share, and he and Martha had those things between them, too.” Or, from “The Staying Freight”:

Winslow simply didn't see his boy running across the field. He didn't see Rodney climb onto the back of the tractor, hands filled with meatloaf and sweet corn wrapped in foil. Didn't see Rodney's boot slide off the hitch. Winslow dabbed his eyes with a filthy handkerchief. The tiller discs hopped. He whirled to see what he'd plowed, and back there lay a boy like something fallen from the sky.

For the residents of Krafton, the small town around which the stories are set, life is filled with quiet, brutal tragedy narrated with the lyricism of plain speech. Moreover, in Volt, Heathcock has skillfully created a world in which both the stories and their consequences are linked. In “Furlough,” Jorgen, a soldier home from the war, lures a friend's girlfriend to a nightmarish party on the outskirts of town. The reader doesn't find out which war until the final story in the collection, when Jorgen's furlough despondency has turned to feral resignation as he is hunted for his failure to appear in court on a drugs charge. The stories double back on themselves, the same families in the same town over the span of years; a son who loses his father in every way but the final one loses his own son, years later. We don't need to know what war Jorgen was home from because it could have been any war, as the grief of another returned soldier in “Fort Apache” demonstrates. This doubling back can sometimes verge on the repetitious, however. One begins to want something more from Heathcock's characters than sadness without expression, suffering, and body-hiding, generation after generation, even beautifully described. After a while, each accidental killing and home-brew set of stitches begins to run together, and the overall impression verges on that of asking why anyone lives in this cursed county in the first place, where no one can leave his house without murdering a child. The bodies of murder victims, accidental or otherwise, are concealed in three separate stories. What starts out as affecting in “Smoke” is jarring in “Peacekeeper,” and by the time “The Daughter” rolls around, the disconnect between the beautiful sentences and the actions those sentences describe is substantial. I kept hoping Heathcock would come up with some other way for people to bring out their grief and despair than lashing out and ending a life, and concealing it after. The uniformity of Krafton's near-biblical woes aside, Volt is an affecting array of stories, beautifully written, spare in execution. All of which is to say that this collection suggests that readers can look forward to more impressive work from Heathcock in the future.Alan Heathcock's fiction has been published in many of America's top magazines and journals, including Zoetrope: All-Story, Kenyon Review,VQR, Five Chapters, Storyville, and The Harvard Review. His stories have won the National Magazine Award in fiction, and have been selected for inclusion in The Best American Mystery Stories anthology. Heathcock is currently the Writer-in-Residence for the city of Boise, and a Literature Fellow for the state of Idaho. A Native of Chicago, he teaches fiction writing at Boise State University.