Audrey Schomer is a freelance reader, writer and lover of the arts living in New York City. A New England native, she graduated with a Bachelor of Arts degree in English and Film Studies from Mount Holyoke College in 2007. Contact her at audrey.alschome@gmail.com 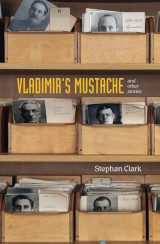 Set against the backdrop of Russian history from the time of Peter the Great to the post-Soviet collapse, Stephan Eirik Clark's debut collection of short stories Vladimir's Mustache ({encode="http://www.russianlife.com/store/index.cfm/product/215/vladimirs-mustach... title="Russian Life Books"}) invokes a remarkable series of history's ghosts. Each builds shuddering momentum, like a train set on old iron rails in search of a vague destination. His characters sustain a paradoxical riddle of being. Both whimsical and downtrodden constituents of an unrelenting Russian societal context, they are so abysmal as to become absurd. In one, a stray dog becomes the last remaining companion to a laughably hopeless mid-thirties spinster who exasperated and self-aware, jokes, "I'm caught in a Chekhov story!" In another, a learned astronomer is sent to starve and his cosmic knowledge go slack in the gray of a gulag. Clark's longest story should maybe be considered the collection's centerpiece, outside of the title story, in which a boy is sacrificed by his own father when a wandering pervert reduces him to the life of a mediocre castrato. Whether these stories are comic or tragic is indiscernible, albeit probably irrelevant. The best comedy inherits some threads of tragedy, and vice versa. Tightrope-walking, Clark agilely suspends the tension between the two that makes us reel; feeling that we have glimpsed the unmasked face of nature as it actually is. Clark's stories don't just walk this line; they dance upon it. The castrato disenfranchised from his manhood "earns" a wife and child by virtue of an illegitimate pregnancy (not his) and likewise "earns" a job under the tsar by virtue of a comedic incident of mistaken identity. Here, and in other of Clark's stories, fate is nothing but the freak outcome of a fluke. Cruelty is both inexplicable and ordinary, which is feasible cause for Column A response, despair, or Column B response, laughter. In the end, there is no justice, and if there is a positive outcome, it is barely one, itself only by virtue of another accident. Clark also necessarily stirs the politics pot. In several, personal and political identities bleed venomously together, and often obstruct redeeming love and sense of belonging. In the title story, “Vladimir's Mustache” (a nod to the historical taboo toothbrush mustache), when a skilled actor is a fraction too convincing upon garnering the role of Hitler in a renowned playhouse, he is scorned by his wife and ostracized by his community. Reincarnating Nabokov's antihero, an Americanized intellectual Humbert Humbert seeks a nostalgic notion of partnership via periodic visits to the Ukraine. Marriage is a sort of sham to some who stem from this society, and grow askew: love has been transformed into sex and sex has been transformed into politics. The best biographers are storytellers; in Clark's case, the rule is the reverse. Combined, these stories can be said to form a composite biography of the metamorphic Soviet identity. Clark's writing beautifully penetrates that identity at its various points, spanning gamuts of time and individuality, each new beginning breathing life into the mysterious human face whose murder was alphabetically ordered. An archival photograph depicting random victims of Stalin's terror decorates the cover. We inspect their blank faces, but who were they? Thankfully, Clark reports, these disembodied faces belonged to human beings! Blood flowed through their veins, limbs and loins, as well as the longing for other's blood, for their touch, or scream. Beyond the limitations of any biographer, Clark is an inventor when he reveals their hidden interiors. Beyond textbook fact, he shines big revelatory beams into the vibrating souls of these relic-men and women who might otherwise have remained obscure in the Soviet gloom. Whether or not these characters submit to a tender doom, the echoes that resound through the corridors of history speak not to the fatal note, but to the fact that there was a voice.Stephan Eirik Clark's short stories and essays have appeared in more than twenty literary magazines, including Ninth Letter, Witness, The Cincinnati Review, and LA Weekly, and been short-listed for the Fish Publishing Historical Fiction Prize and recognized in Best American Essays 2009 and 2010, among other honors. Born in West Germany and raised between England and the United States, Clark holds a Master's degree in English Literature with a creative writing emphasis from the University of California, Davis and a Ph.D. in Literature and Creative Writing from the University of Southern California. A former print and radio journalist, he has lived in Russia and Ukraine, the latter on a Fulbright Fellowship. He is presently living and teaching in Minneapolis, Minnesota.

Audrey Schomer is a freelance reader, writer and lover of the arts living in New York City. A New England native, she graduated with a Bachelor of Arts degree in English and Film Studies from Mount Holyoke College in 2007. Contact her at audrey.alschome@gmail.com