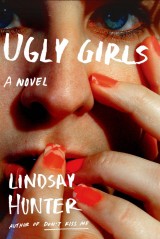 Baby Girl and Perry, the 'fake ass thugs' at the center of Lindsay Hunter's debut novel Ugly Girls (Farrar, Straus & Giroux), spend their days waiting for the night, the moment when they can hotwire a car from the fancy neighboring community The Estates and cruise onto the highway for a joyride. Baby Girl has taken over the swaggering braggadocio of her brother Charles after his injury in a motorcycle crash, while Perry only wants to avoid watching her mother Myra drink herself into a stupor. They taunt Walmart employees, seek out booze and do donuts in empty parking lots, grasping for a sense of immediacy to overwhelm the regular tenor of their lives. Baby Girl is the main driver of these exploits, literally and figuratively, but she does them with an eye toward impressing Perry, intent on hitting the right note of mean. Both girls have an eye on their cell phones, too, waiting for texts from Jamey. Neither have met him, nor have they told the other about their contact with him, which all takes place by text or Facebook message. Baby Girl guards his possible interest in her closely, afraid that Perry will take it away from her. Bravado notwithstanding, she wants this proof, never before forthcoming, of her desirability. Baby Girl does her best to keep Jamey happy by answering his questions about her friend, despite her reservations about his true purpose. Perry's attitude is more utilitarian, less needy: she knows that she is attractive to men, and is willing to use their seeming helplessness before her as another easy distraction from Myra. Perry is disdainful of Jamey's interest, while Baby Girl is starved for his attention. The friendship between the girls seems to depend on their existing at opposite ends of the spectrum with regard to sex. Gruff, purposefully and even aggressively asexual Baby Girl is fascinated by Perry's easy mastery of it, and being close to Perry seems the best approximation she can find of having that control herself, while Perry has a slight, self-satisfied disdain for Baby Girl's lack of effort. Jamey senses this dynamic and poises himself to take advantage of it. An older neighbor of Perry's in her trailer park and a convicted sex offender, he suggests to Baby Girl that they all three meet up, despite Perry's lack of interest. Jamey stops by her trailer, too, leaving his BB gun leaned outside the door. His visits are always when Perry's devoted stepfather Jim is working the night shift and Myra is home drinking alone, flattered to think that a younger man is showing interest in her, despite her annoyance at his concern over her daughter's whereabouts. Without Perry realizing it, Jamey circles in on her tighter and tighter as the novel progresses. Even the chapters centered on Jim only serve to drive home the threat, centering as they do around his altercation with another sex offender, one who knew Jamey in prison. By the time Baby Girl drives Perry to meet up with Jamey one rainy day after school, violence hangs in the air of the novel's already seedy atmosphere. The threat is delivered upon, though without harm to Perry or Baby Girl; instead it is Jamey who loses his footing during the confrontation, falling to his death in a ravine on the side of the road. Perry refuses to go after his body at the bottom, and the friends drive off, leaving the corpse to wash away in the rain. Not laid to rest, however: his invalid mother comes calling for him at the trailer days later, demanding answers, just as Baby Girl has arrived to demand that they tell the authorities about what happened. Hunter got her start doing flash fiction, and that urgency and authenticity come through in her novel, which goes down with compulsive readability. The friendship of Baby Girl and Perry feels authentic, with its aimless inseparability followed by a drifting apart after events divide them, and the eye of the narrator, while it sees their pettiness and vanity, observes them compassionately. It might have been wiser to let the friendship and home lives of the two girls stand alone, instead of embedding them in the sordid drama with Jamey. Baby Girl and Perry don't need accidental death and the specter of a sex offender to make their friendship interesting, as the over-the-top final confrontation of the novel seems to imply. They are amply engaging just driving around in a stolen car, two teenagers who don't know where they're going, only that they want to be on the move. Lindsay Hunter is the author of the story collections Don't Kiss Me and Daddy's, and the novel Ugly Girls (November, 2014). Originally from Florida, she now lives in Chicago with her husband, son, and two pit bulls.