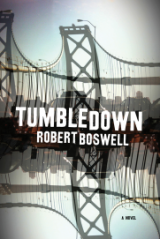 Foolish behavior is a key ingredient of human nature. We tend to waste a great deal of our vitality pursuing goals of dubious value. Confronting this basic truth, writers have a few options. They can ignore it, and create characters who start out or become wiser and more heroic than any actual human being; they can get mad, and write nasty satires; or they can adopt an attitude of acceptance, finding their characters' foibles amusing, hoping at most for slight correction. To risk a shakier generalization, Robert Boswell—the highly accomplished author of seven previous novels, three short story collections, and other work—is the third kind of writer. His characters are extremely foolish, and their foolishness is a big part of what makes them persuasive and compelling, but he rarely seems angry at them. Certainly, James Candler, the most prominent character in Boswell's new ensemble novel, Tumbledown (Graywolf Press), does more than his fair share of reckless things. He is a counselor on the verge of being named director of the Onyx Spring Rehabilitation and Therapeutic Center, but when we meet him he is not exactly acting as either the calm fountain of wisdom or dull bureaucrat that we might expect. Instead, he is engaging in an impromptu drag race in a much too expensive car. We soon learn that he is engaged to Lolly, an acquaintance of his sister Violet's, whom he met while in London for his brother-in-law's funeral. That might not sound reckless, except that he proposed after they had been dating for only a couple of weeks, following some Skype sex in which her “willingness to flaunt herself” had struck him as “just so damn nice.” (The proposal, via text message, read “I llove yo.u marry me”; the response was “LUV U2 LET'S SET DATE.”)The primary obstacle to this couple's marriage—at least, the primary obstacle after common sense—is Elizabeth, who is currently calling herself Lise, “pronouncing it like a rental agreement.” When she was calling herself Beth Ray, failing to make it as a B-movie actress and working as a prostitute, she was very briefly Candler's client. Now she's reformed and living what appears to be a healthy life, except that she's completely obsessed with Candler.Boswell handles this love triangle with admirable good humor and sexual frankness. The novel is saturated in sex, often unhinged, desperate, and mediated by technology, but there is never any hysteria. Paradoxically, Boswell, a writer in his fifties, seems more sanguine about new technology than do many younger writers. If Candler falls in love over Skype and texts a hasty proposal, we never feel that technology is turning him into a fool; technology just helps him do foolish things faster. The characters' desires feel so urgent to them that we often forget that those desires are absurd, and we turn the pages eagerly. The narrative sangfroid also works well for Candler's memorably drawn sister, the grieving Violet, and for Billy Atlas, a ne'er-do-well childhood friend for whom Candler arranges a job at the clinic. We spend much of the novel wondering whether Billy will prove to be the moral center of the novel or whether he will make the worst choices of anyone, and the fact that he could go either way lends the novel a great deal of tension.The novel stumbles in some of the subplots that take place in Candler's workplace. The various romantic entanglements—of varying degrees of inappropriateness—start to blur a bit. So many characters lust after the beautiful, mentally handicapped Karly that we long to learn something about her other than that she is beautiful and mentally handicapped, and we long, also, for the novel to engage more critically with how Karly is treated. (Here, Boswell's generally laudable withholding of judgment feels evasive). Also problematic—and occasionally threatening to turn Boswell into that first kind of writer, the one who wants to make heroes rather than people—is Mick Coury, a suicidal, schizophrenic patient at the clinic who flirts with sentimental Wise Fool stereotype. Also flirting with this stereotype is Candler's and Violet's older brother, Pook, an autistic, brilliant painter whose early death casts a shadow over the novel. In Candler and Violet, Boswell has created a pair of lively and flawed siblings; the melodramatic backstory is unnecessary. Though his individual characterizations sometimes err, Boswell's overall vision does not. His forgiving attitude towards his characters keeps us reading, and finally teaches us by example to forgive their flaws and even to love them.Robert Boswell's previous books include The Heyday of the Insensitive Bastards and Mystery Ride. He teaches creative writing at the University of Houston and in the Warren Wilson College MFA Program.