THE WEIRDNESS by Jeremy P. Bushnell 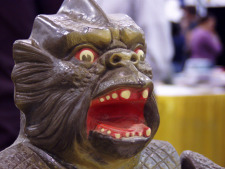 Scott D. Elingburg is software analyst and freelance writer. His work has appeared in the South Carolina Review, the Southeast Review, Wide Awake Press Anthologies, MetroBeat (formerly Creative Loafing), Charleston Style and Design, and several other publications. Currently he is the reviews editor and regular contributor at the pop culture website, Stereo Subversion and frequent contributor to PopMatters. He's not much of a fisherman, but he does live in Charleston, SC with his wife, daughter, and cat.
April 9, 2014 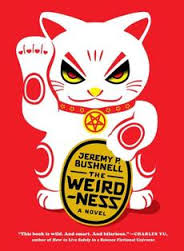 Rule number one of life is always this: don't make a deal with the devil. It's a simple governing rule, really; No matter how tempting, no matter how enticing, you just don't do it. But the devil is good at tempting people. He offers them what they want, not what they need, and our fortitude is weak against temptation. Especially when the devil comes bearing strong coffee. Billy Ridgeway, the protagonist in Jeremy P. Bushnell's utterly likable first novel The Weirdness (Melville House), isn't the first to be tempted by the Devil, (or Lucifer Morningstar for proper nomenclature) but he is ripe for the tempting. Billy's roommate has disappeared, his job as a sandwich maker is about as appealing as it sounds, his relationship with his girlfriend is unstable, and, worst of all, he's another unimpressive writer in a swamp of talented New York writers. His self-confidence hovers around zero and Billy fumbles his way through the days, contemplating the presence of bananas and how he's going to make rent for the month. Which doesn't exactly make Billy a likable character, per se; Billy whines a lot, he drinks too much, he's not proactive or even original. And you get the feeling that his writing as unimaginative as he is. But even Billy knows to kick the devil out of your apartment when he shows up. Billy is surrounded by other, more endearing characters that illuminate why his sad sack personality is a moderately attractive feature. HIs friend and co-worker, Anil, is the accepting, rational foil to Billy's whims. Their mutual friend known only as The Ghoul, is comically sensible. And his newest friend/lust object, Elisa Mastic, is the girl Billy wishes he had, rather than his current girlfriend. The characters loom large in The Weirdness, not only because their intersecting lives make up the bulk of the emotional investment, but also because the story—when stretched to its absolute limits—gets a bit flimsy in places. There's a Warlock, Timothy Ollard, who has stolen a neko (the waving cat that adorns the book's cover) from the Devil, and is going to use it to burn the world down. The neko is a source of unlimited heat and remains cloaked in gothic tower in the middle of Chelsea. Then there's the Right Hand Path, a company of mystical good guys who communicate via streaming television shows. And to top it all off, some of the characters are Hell wolves that were bred from a “sex magic ritual.” To appreciate The Weirdness, you have to buy into its eccentricities wholeheartedly. Bushnell's appreciation for his subjects—fantasy, magic, religion—are woven into his writing. It helps when Bushnell's endearment for his characters and their predicaments comes across as genuine and honest. (I think every writer can see pieces of themselves in Billy Harrison's struggle and self-doubt as a writer.) And The Weirdness contains some of the more humorous exchanges between characters in contemporary lit. Bushnell has an ear for hilarious and realistic dialogue and he plays every beat and pause for maximum effect. The Devil's exchanges with Billy are alternately sidesplitting and menacing, and Billy's moments of surprise and shock as new revelations unfold are as realistic as possible; lots of expletives and lots of human anger. The Weirdness surpasses its title. Bushnell's novel is head-trip through a thinking person's game of Dungeons and Dragons and is dusted off with a few revealing moments about the human condition. We laugh at the absurdity of our situations, but we're only doing so to keep the demons at bay. And for most of us, that's a tougher job than we'd like to admit; and a lot weirder, too.Jeremy P. Bushnell is the fiction editor for Longform.org, and is also the lead developer of Inevitable, a tabletop game released by Dystopian Holdings. He teaches writing at Northeastern University in Boston, and he lives in Dedham, Massachusetts. This is his first novel.

Scott D. Elingburg is software analyst and freelance writer. His work has appeared in the South Carolina Review, the Southeast Review, Wide Awake Press Anthologies, MetroBeat (formerly Creative Loafing), Charleston Style and Design, and several other publications. Currently he is the reviews editor and regular contributor at the pop culture website, Stereo Subversion and frequent contributor to PopMatters. He's not much of a fisherman, but he does live in Charleston, SC with his wife, daughter, and cat.