THE STORY OF MY PURITY by Francesco Pacifico. Translated from the Italian by Stephen Twilley

Jon Boulier is a writer, photographer, and an instructor at the University of San Francisco. He's contributed to Opium Magazine, Block, and The Rumpus. As a photographer, he's shot regularly for How I Learned, the Franklin Park reading series, and The Monthly Rumpus. He's currently at work on a novel and a collection of short stories. 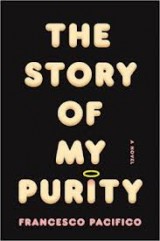 The Story of My Purity's narrator, Piero Rosini, teeters on the edge of his fanatical Catholic faith. He doesn't realize this, of course, but we do. As we observe Piero looking for a way out of his job as an editor at Non Possumus — editing books orbiting conspiracy theory-ish analyses of secular culture's undermining of the Church — we're privy to myriad observations about his life, his faith, and contemporary culture.Here's the thing: you can't really judge a book by its narrator, but Piero Rosini is a pretty unlikable guy. He's anti-semitic, racist, misogynistic, and in possession of a faith that's not just intellectually crippling, but socially problematic. He's also pretty creepy. (One example: it seems being in the same room as a sleeping woman is occasion for a bit of night-time molestation.) One would think a narrator of this calibre is ripe for the picking of forgiving readers like me — even the non-forgiving ones — who, when it comes to literature, have admittedly selfish expectations: we're reading to feel something. Because of that expectation, Piero Rosini seems like a good candidate for the kinds of emotional transformation that create better, more refined human beings.Non Possumus is in the process of publishing a book appropriately titled The Jewish Pope, which is pretty much about what you'd think, when Piero meets Corrado. Corrado is a young novelist in search of a publisher for his book, which is ostensibly about “making fun of gays.” Non Possumus doesn't publish novels, but there's an opportunity for Piero to amuse himself by entertaining the young novelist's dreams of publishing. This is the rock from which The Story of My Purity (Farrar, Straus and Giroux) leaps. Soon, we follow Piero as he slowly detaches from Non Possumus to become better acquainted with Corrado, who introduces him to a woman named Lavinia. It's after this introduction to Lavinia that he questions his faith, his marriage, his beliefs, and among other things, his inability to attain an erection. It seems pertinent to note, against better judgment, that Piero's fascination with Lavinia is clinched in one particular moment: he smells her “comradely” odor as she uses the toilet. The reason for this pertinence? The majority of the novel is sadly unremarkable but for moments which seem to exist solely for the purpose of readerly provocation.We're treated to a frustrating series of almost-decisions as Piero skirts enlightenment. In Paris, four bohemian women in turns tempt our hero with pleasures of the flesh — their bodies, lifestyle, a variety of chemicals, etc. One of those women is Clelia, who we learn is Jewish. Even sleepy readers can't fail to pick up on this clue, since many of Piero's thoughts regarding Clelia are about, or in response to, her Jewishness. Again, you can't really fault a book for the personality of its awful narrator, but the fixation Piero has on Clelia being a Jew evokes in the reader — in impatient, suspicious ways — the longing to finally applaud some kind of absolution.Sadly, for both Piero and the reader, Piero is obstinately disagreeable. He manages to exist in stasis throughout the entire novel — even when Piero comes close to engaging with something revelatory, he retreats. Doubly provocative is the novel's structure itself: mimetic of this same retreat, in the way narrative devices fracture the reader's perception of who and what Piero is — either by way of literally fractured personalities (Piero comes to be known early on as Chewbacca and then later, as Rosenzweil, and then later still, as a multiplicity of Rosenzweils), or by devolution into a fractured narrative.The mimetic structure is the novel's the most corrosive and pleasure-denying element. (Which is...surprising, given our narrator's acidic personality.) In its end pages, we're too quickly escalated from traditional, realist prose into something mimetic of Piero's degenerating perspective on the events of his own life. Because of Piero's fractured selves (faithful Piero, experimental Chewbacca, íbermenschy Rosenzweil), new voices arise. And though the majority of Piero's experience seems lucid, as the novel's climax begins to form, the voices clamor with each other in ways that fundamentally change the reading experience far, far too late for most readers to reasonably expect or accept. And, to this reader's chagrin, the possibility of Piero's redemption never comes.As the novel reaches crescendo, its melody is encrypted. It comes as a series of unanchored voices both real and unreal in conversation with one another. We seem to be told, albeit obliquely, some species of: shit happens. Which yes, shit does happen. I think all readers can attest to this. But even that fruitless proclamation is nestled tightly into an almost forbidding clump of closing pages that are frustratingly, ethereally, cross-referential; the book, in a way, seems to shrug off responsibility for its own existence by having a conversation with only itself. What should we be extracting from these hundreds of pages? Elissa Bassist, in her review of Pacifico's novel for Slate, echoes my own feelings as she considers some of Piero's self-analysis:

"[T]his was not the story of my redemption, but neither was it merely a story of my depravity,” Rosini or Chewbacca or Rosenzweil says. “I wasn't someone who had repented of having thought ill of Jews and now that he knew them didn't find them so bad.” So what is the story about?

And that's the question. Because, when certain writers offer us a slice of life, it's sometimes made of things that nourish the parts of us that seek redemption, empathy reciprocal to the human spirit, and hope. We leave the work feeling as if we've eaten something. Are we meant to take Piero's often tedious, inconsequential, and ironic experiences over the novel's course as a slice of life? Is that the conceit, here? If yes, I can't help but wonder who could possibly thrive on a meal like this.Francesco Pacifico has written for a number of Italian publications, as well as for Rolling Stone and GQ, and has translated the works of Henry Miller, Allen Ginsberg, Dave Eggers, Will Eisner, and more. He lives in Rome.

Jon Boulier is a writer, photographer, and an instructor at the University of San Francisco. He's contributed to Opium Magazine, Block, and The Rumpus. As a photographer, he's shot regularly for How I Learned, the Franklin Park reading series, and The Monthly Rumpus. He's currently at work on a novel and a collection of short stories.