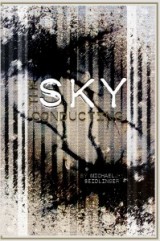 The Sky Conducting, Michael J. Seidlinger's debut novel, is a sometimes unsettling, often dry entry into the annals of post-apocalyptic dystopian literature. In it, America is dead of an unknown event, and the only Americans left are a family. The nuclear family, as it is called throughout, is comprised of a mother, a father, a daughter, and a son. All things considered, this slim book is heavier on mood than on plot and characterization. In the novel's early pages, the atmosphere works. The family stays inside after the unknown event, instead of leaving like their neighbors do. Their two-story house, on an isolated street in suburbia, is fortified with a generator and stockpiles of food. Only the daughter, who before the “heart attack” thought of making a name for herself as an artist, contemplates escaping.But escape to what? Other than to check the generator, the family does not leave the house. The reader is given to understand that even before the event, the family stayed at home—the daughter refusing invitations from her “godlike” friends with cars to return home, where she knows she is needed. If it weren't for the post-apocalyptic element, The Sky Conducting would be a tale of suburban ennui and the emotional emptiness of the American quest to consume. Each member of the family is stunted, unable to move beyond the expectations of their pre-event life in the post-event world. The father, who before numbed himself with alcohol, now drinks dry mugs full of ash. The mother used to be a high-powered businesswoman, but there is no one around to appreciate how high her salary was now. And the son, always sickly and weak, has lost his only friend when the family dog Fellow ran away or was killed -- he doesn't know which. These broadly sketched characters feel familiar, with their disaffection and their yearning for the material goods that they can no longer have. When Johan, a mysterious foreigner is introduced, his motives are even more recognizable. By keeping the brushstrokes broad, perhaps the goal is to keep the family and Johan more widely relatable. This universality ends up coming off a bit on the generic side, and can sit oddly within the spare and conceptual prose. At the start, the reader is told that “Lines in this book are arranged within chapters and within these chapters they are arranged not by scene but by context...read them as you would anything else but view them not as a patchwork but rather as statements existing over a given period of unrecorded time.” Each page was composed of one or two sentence paragraphs, and maybe four to five such paragraphs per page. This “contextual arrangement” works well for the most part, as the father and daughter first leave home and travel through the ruined downtown, now full of foreigners trading for pieces of Americana and sex. Johan's quiet, enthusiastic menace, however telegraphed, is deeply felt. The family under his guidance--or control?--make a kind of journey towards themselves, towards the selves they might have been if America had never had its heart attack. The Sky Conducting proclaims: “America is an artifact.” As Johan takes the daughter and the father on their search for a vehicle large enough to carry all of them, he insists on making a trip to the mall, to trawl through the mud and rubble for things to sell wherever it is he's going back to. And as the family sets aside their pain to help him search, they become more and more the prototypical American family at the mall, their troubles momentarily forgotten in a temple of consumerism. When Michael J Seidlinger isn't consumed with language, he's transforming into a graphic artist, musician, or professional boxer. When he's not doing that, he's turning into somebody else. His books include THE SKY CONDUCTING (Civil Coping Mechanisms, 2012), IN GREAT COMPANY (Enigmatic Ink, 2011), and THE DAY WE DELAY (Civil Coping Mechanisms, 2011).