THE RISE & FALL OF THE SCANDAMERICAN DOMESTIC: Stories by Christopher Merkner 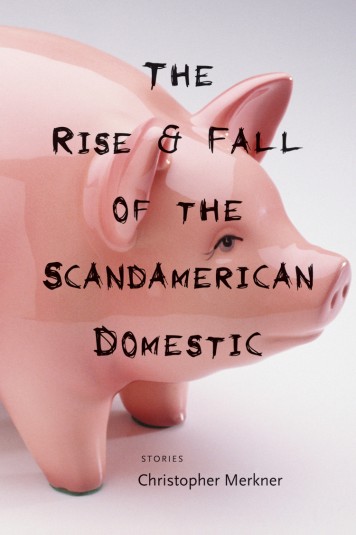 Christopher Merkner's debut story collection, The Rise & Fall of the Scandamerican Domestic (Coffee House Press), knows one big thing about us: given the choice between hideous violence and honest conversation, we often prefer the former. Hopefully, our violence is figurative; the violence perpetrated by Merkner's characters is splatteringly literal. A story titled “When Our Son, 36, Asks Us For What He Calls A Small Loan” is not about a sober, reasonable discussion of the direction of the son's life; it is about a mother and son who stab each other at the dinner table.One big thing is more than most writers know about us, and Merkner tells it to us in ways that make us gasp and laugh. Much of this humor derives from bloody slapstick, but much funnier than the bloody slapstick is the sociopathic silence that motivates it. The parents of “Direct Assault From South Sweden” are so controlling and withholding (“It's very hard to lie to children. It's also very easy. It gives a person an unpleasing pleasure”) that they are horrified to discover that their son and his piano teacher have been, well, talking. The protagonist of “O Sweet One in the Bluff” is so unprepared to be a communicative father that as soon as his daughter says her first words he ceases to speak at all.Perhaps, as Merkner suggests through his title, epigraphs, and countless other nudges throughout the book, the illness he is documenting is especially pronounced among Midwestern Americans of Swedish descent. It also seems plausible that the illness he is documenting is prevalent among all people everywhere. Merkner may be overrating the unusualness of the region in which he was raised, a mistake that is essentially a prerequisite for writing good short fiction. And the fiction here is good. Merkner's sentences are crisp and cruel, and these stories are admirably free of any forced uplift. As a whole, the book resembles the movie Fargo with its heart fed through the wood chipper, leaving a work that is often possessed of cold, uncompromising beauty. Consider the opening paragraph of the sort-of title story, “Scandamerican Domestic,” a paragraph that keeps springing nasty surprises on us from one sentence to the next:The children wanted me to buy them diapers. It was at first silly. Then they voiced up. I couldn't follow their logic; I rejected the appeal. I explained they were not in charge. I told them their silliness wasn't welcome. I may have called them idiots. I may have said they were acting like idiots. It's hard to remember. I definitely told them it wasn't personal. Still, they wept. Every friendship has a bad patch.Also admirable is Merkner's willingness to be judgmental about his characters. In an interview about the story “Cabins”—about a man too busy passively observing the divorces of his friends to pay attention to his own marriage—Merkner unapologetically says that he is “not a fan” of his protagonist, who “deludes himself, blames others he simultaneously emulates, struggles to manage his self-pity.” Fiction writers need to catch their characters in their lies, not cheer them on or even necessarily feel empathy for them, and it's refreshing when a writer comes out and says so.There is a major problem with this collection, though, and Merkner hits on it in the same interview. The downside of heartlessness is the same as the downside of short story collections: repetition. Poor communication leads these characters to violence, and then it does so again, and again. Merkner describes repetition as “personally a hard issue for me,” and he is wise not to force himself away from his favored thematic terrain, but the collection might be stronger if not all of the stories had made the cut. The opening story, “Of Pigs and Children,” in which a man delays telling his mother about his extravagantly gory accidental killing of his uncle and becomes sexually fixated on her pet pig, would be my candidate for the chopping block; the brutality of these stories shocks us more when it doesn't try quite so hard to do so. The strongest story is the final one, the only one that portrays what might reasonably be called a loving family. “Last Cottage” is narrated in the first person plural, in the voice of townspeople who are trying to push out a family, the Larsons, so that their lakefront property may be commercially developed. Typically of Merkner characters, the townspeople are reluctant to talk to the Larsons (“We believe confronting them would be awkward”), preferring instead outrageous violence, electrocuting the lake and taking other absurd measures to litter the Larsons' property with fish carcasses. Atypically of Merkner characters, the Larsons respond by drawing closer together, and by reacting to misfortune with rationality, equanimity, and a sense of play. There is no chance that this story can end with anything other than horror, itself more horrifying because it is happening to people who are not themselves horrific. That this story concludes the collection bodes well, and makes us think that Merkner's deepest and most discomforting work is still to come. Christopher Merkner teaches creative writing at West Chester University. His work has appeared in Black Warrior Review, Cincinnati Review, Fairy Tale Review, Gettysburg Review, New Orleans Review, and Best American Mystery Stories.