THE ODD WOMAN AND THE CITY by Vivian Gornick 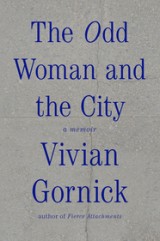 ODE TO A DYING CITY Vivian Gornick's elegiac memoir, The Odd Woman and the City: A Memoir (Farrar, Straus and Giroux), is a kind of ode to a liberal, intellectual New York that no longer exists – and one she knows she never can or will leave. As she wanders the city like a flaneur with her best gay friend Leonard, observing the changing city and faces, she muses on past loves, past friendships, and literature. She writes, in one of many lovely passages:

“Of these treks of ours, the character of time-and-often changed as we walked. The concept of “hours” evaporated. The streets became one long ribbon of open road stretched out before us, with nothing to impede our progress. Time expanded to resemble time in one's childhood, when it seemed never to end, as opposed to time now: always scarce, always pressing, always a fleeting marker of one's emotional being.”

And a walk with Gornick is pleasant journey – a New York where time is of little essence and life is filled with former radical feminists, book dealers, lots of talks about literature in tall velvet chairs, dinners at the homes of psychoanalysts, and solace and truth found during 9/11 in the “minimalist prose of French and Italian novelists of the fifties and sixties.” It is also a New York that Gornick can't leave. In some ways, the book is almost a counter argument to Joan Didion's Goodbye to All That – a reason for, rather than against, the city that never sleeps, despite all its inevitable disappointments, loneliness, and broken promises. Gornick writes of New York's magnetic pull on her:

“It's the voices I can't do without. In most cities of the world the populace is planted in centuries of cobblestoned alleys, ruined churches, architectural relics, none of which are ever dug up, only piled one on top of another. If you've grown up in New York, your life is archaeology not of structures, but of voices, also piled one on top of another, also not replacing one another.”

The Odd Woman and the City is filled with brief but penetrating insights such as this, fleeting as city life itself. And though it makes for a lovely read – ideal for idle, dreamy, paging through on the subway – it comes with just a word of warning. Don't expect to find a city that looks like this today.Vivian Gornick's books include Approaching Eye Level, The End of The Novel of Love, and The Situation and The Story. She lives in New York City.