THE LIFE OF AN UNKNOWN MAN by Andreï Makine

McGrath Tandy is a writer living in San Francisco, working as an editor for an interior design trade publication. She holds a Master's in 20th Century Literature from Brooklyn College (wildly useful) and is currently working on a memoir.
May 15, 2012 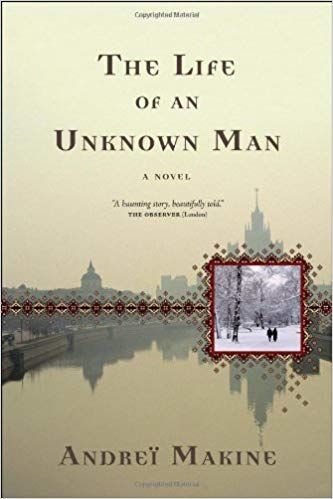 Toggling in time between modern-day Russia, the Siege of Leningrad, and the ineffable romance of Paris, Andreï Makine's rather short, but rarely sweet novel, The Life of an Unknown Man (Graywolf Press), deftly explores some age-old archetypes—the woes of war, the nature of identity, and man's epic quest for meaning—but manages to infuse these troubling tropes with reinvigorated insights through a stunningly lyrical lens. Our tale opens in the wake of a lovers' parting. Shutov, a once brilliant writer who vacillates between arrogance and seething self-loathing, compulsively rewrites his life as he is living it, desperate to capture it as it flutters by; it seems he wants to nail down its wings for posterity, to freeze one arresting moment forever. Of course the reader and Shutov himself recognizes the futility of these attempts, particularly in regards to his (now ex) young lover Léa who has recently fled his attic apartment, completing a long, languishing break-up:

Beyond the window pane, a May night, the fantastical collection of ancient açades marching up the slope of Ménilmontant. How often had he longed to talk to Léa about these moonlit rooftops! As if covered in snow. He had found no image to capture the poetry of this sleeping whiteness. Rooftops made nacreous by the moon? No, that's not it. In any case, what's the pint of trying to find an evocative phrase? Léa has gone...

Shutov is a man deeply haunted by the past—painfully reliving every seemingly squandered moment—but also lamenting the present, questioning the worth of his writing, his present country and his entire existence.He “twists his face into a grimace...he is the absolute prototype of a man ditched by a woman young enough to be his daughter. The plot for a lightweight novel in the French manner, a hundred pages of Parisian bed-hopping and gloom. All a love affair such as his would be worth.”This kind of self-effacing inner monologue becomes a slender, but steady thread throughout Makine's story, carefully exploring the dialogue between a country and its literature, a country and its people, and a country and its history; the dualities are intrinsically bound and every relationship carries its own joys and punishments. Shutov is of course, a frenzied follower of Chekov, simultaneously celebrating and cursing the infamous writer's work whose cerebral, neurotic and largely depressing works have become an archaic aesthetic of the past. “Goddamn Chekhov!” Shutov moans. “In his day you could still write like that...Shutov began to dream of the Russia he had not seen for twenty years and where, he believed, a life persisted, rocked to sleep by well-loved lines of verse. A park beneath golden foliage, a woman walking in silence, like the heroine of a poem.” Following Léa's final farewell, in which she lets Shutov know the root of his name means “fool,” our bedraggled anti-hero revisits St. Petersburg following two decades of exile, ostensibly in the hopes of rekindling an old flame with Yana, a lover he has not seen in thirty years. Shutov imbues the journey with a possible redemption, a possibility to not only recapture his former self, a youth that has fled with his dignity and his dreams, but perhaps awaken a greatness inside that still slumbers. “You're like an undetonated shell with its devastating power still intact,” Léa insists to Shutov. “You're an explosion still waiting to be heard.”Sadly the Russia Shutov remembers, or thinks he remembers, has fled along with his past, and in its wake is a Russia gone mad with modernism, consumed by a cultural identity he feels both offended by and rejected from.

The wistful beauty of the reunion he planned is toppling over into burlesque. Having come as a nostalgic pilgrim, he finds himself by modernity gone mad, a mixture of American razzle-dazzle and Russian clowning.

Shutov is shocked by the simultaneity, the lurid saturation of experiences manifested entirely by Russian television.

..he feels almost happy. Relaxed at least, thanks to the absurdities flooding the screen. The secret he sought to fathom is simple: Russia has just caught up with the global game of role-playing, its antics, its codes...

While staying at Yana's lavish apartment, Shutov clicks rapidly between an old streetcar crossing a starving city during the war and a gold-plated pool filled with champagne and breast-stroking tycoons. He laughs, almost in relief:

No point in cudgeling one's brains, just accept the world carnival, which the Russians have now joined. All aboard! The merry-go-round revolves and only prehistoric creatures like him still care about the previous century.

Yana, Shutov's long-ago lover is perhaps the ideal manifestation of these new ideals; steeped in new money, she has recently knocked down the walls of four adjacent apartments to make way for a sprawling modern mecca of her own.Shutov discovers there is an old bedridden deaf-mute, Volsky, that, due to an unfortunate bureaucratic mishap, still lives in one of the bedrooms she has overtaken. The authorities were supposed to have moved him to a home more than 10 days ago. Through this seemingly forgotten and forsaken man, Makine weaves a harrowing story of war, tracing Volsky's tenacious survival in the face of Stalin's genocidal purges, the march on Berlin, and the woman's love that saved him.Volsky is without bitterness, fear, self-loathing, regret or even revulsion for the newly minted modern Russia whose recent grandeur rests upon a savage past. Together with Shutov, we're given one of those rare glimpses of life from a bird's eye view, where our own minutia is at once painfully important, but also terribly transient.After meeting Volsky, Shutov glances up and realizes he has “never seen so much of the sky in a single glance”; his once myopic vision has opened to the incredible freedom of being unknown, to carve out a life that is led for its own sake, beautiful in its tiny intricacies. Andreï Makine was born in 1957 in Siberia and has lived in France for more than twenty years. His novels include Dreams of My Russian Summers, which has sold more than a million copies and received the Prix Goncourt and the Prix Médicis.