THE LEGEND OF PRADEEP MATHEW by Shehan Karunatilaka 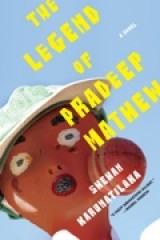 Whenever a big test match bubbles up to the international sports headlines, I start to get uncomfortable. As a sports fan, I want to like—or at least understand—cricket, but I've never been able to make sense out of its mysterious scoring, languid pace, and baroque, yet oddly arbitrary, rules system. Shehan Karunatilaka's The Legend of Pradeep Mathew (Graywolf Press) isn't the place to turn for answers to questions about the complexities of cricket, and—save for some cheeky illustrated tutorials—one doesn't get them. Instead, the reader learns that the sport, like the book itself, delivers meaning in its omissions, its mysteries, its unfair twists and turns, and its moments of virtuosic power.W.G. Karunsena, a hard-drinking sportswriter and Legend's primary narrator, considers “sport” to be a way out of life's relentless disappointments, but Legend itself offers no simple dichotomy about sport's purity. In fact, W.G. unearths a cricket history both haunted and enriched by cheaters, fixers, bombers and political power players of all stripes. The author is excellent at weaving cricket fact with cricket fiction to reflect and amplify South Asia's rich but often confounding history. Despite his discoveries, W.G. is a true believer in the redeeming power of “a gifted athlete in full cry.” He is convinced there is a white whale underneath cricket's thick conspiratorial net—a pure example of athletic brilliance, in the form of a mysterious Tamil spin bowler named Predeep Mathew—and he has dedicated his waning years to finding and documenting Mathew's controversial and short-lived career. Like any aging, alcoholic yarn-spinner, W.G. is hard to trust when he describes his resulting experiences of sporting perfection, like Pradeep's world-record breaking 10-51—a match that featured the legendary double bounce ball, which “pitched wide off leg, like a misplaced carrom ball, cut onto the off stump, then darted back into the stumps” and led to such scandal that the powers that be decided to invalidate the match. “We were told that any paper publishing a match report would have its licence revoked. We looked on forlornly as history was erased...” This is just one of many examples of where evidence about Mathew eludes and casts doubt on his biographer.W.G. sacrifices just about everything for his search of proof about Mathew; he disappoints his stubbornly loving wife, ignores and disparages his son, loses friends and money, and drinks far too much. But he also meets some memorable characters, including his fellow Pradeep seeker and lifelong friend Ari Byrd, and catches glimpses of power and truth that make his readers want not only to forgive his lies, but believe them. Mathew is reminiscent of other generation-defining debuts like On the Road and The Savage Detectives. Like those books, Karunatilaka finds the energy to fully embody a specific place and time all while delivering insights into deeply human themes—he eloquently unpacks the unintended ties between fathers and sons, the magic of lifelong friendships, and married love's insistent ability to fill in the darker corners of life (W.G. wonders in a regretful moment whether all wives are doomed, after their children leave, to “prep their husbands for the grave”). Mathew also shares the weaknesses of such crackling debut novels; the book can feel like a haul given its epic length and scattershot attention span. This style is partly intentional, but, nonetheless, some passages feel gratuitous. For the most part, those who give Mathew some time and patience will be rewarded with vibrant characters, plenty of pearls of wisdom and humor to dog-ear, and inspiration to enter a YouTube rabbit hole of Chinamen, googlies and (if you can find them) double-bounce balls. Shehan Karunatilaka lives and works in Singapore. He has written advertisements, rock songs, travel stories, and bass lines. This is his first novel.