THE LAW OF LOVING OTHERS by Kate Axelrod 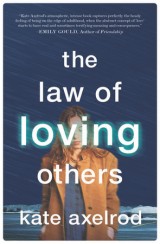 Uncertainty and indecision are not limited to any specific demographic, but they are both central to adolescence. Whereas later in life they can lead to wheel spinning, on the path to adulthood they're just as likely to serve as driving factors. At that age, an action is going to be taken one way or another. If it isn't guided by reason, impulse will have to do.For the most part, however, Emma, the seventeen-year-old protagonist of Kate Axelrod's debut novel, The Law of Loving Others (Razorbill), isn't an “impulsive” person by nature. Her life drifts further and further into uncertainty as things progress, and her response is, naturally, to look for ways to regain control.The story takes place over a winter holiday break. Emma and her boyfriend Daniel have driven back to New York from the boarding school they attend in Pennsylvania. Daniel lives in the city in an apartment on Central Park with two parents who allow him a certain level of adult sophistication. Emma's home is a not-too-far train ride north in Westchester, her upbringing lacking only in relativity to Daniel's high level of privilege. They don't come from different worlds; their experiences are just separated by a matter of degrees, or at least they were.Not long after coming home, Emma notices something off with her mother. As her mother's behavior quickly becomes more and more erratic, Emma's father has to place her in the hands of professional care. It comes to light that Emma's mother has suffered bouts of schizophrenia in the past, but the most recent episode occurred so far in the past that Emma was too young to remember it. Emma is surrounded by people – her father, Daniel's mother, other friends and family – who reassure her that her mother will be okay with some readjusting of her medication, though Emma is skeptical.They also do what they can to dismiss Emma's concern about her mother's mental illness being hereditary, but early on Emma falls victim to the endless rabbit hole of Internet sites dedicated to determining what health problems you have. Axelrod's depiction of Emma's obsession with these sites calls out the quite real modern problem of misinformed self-diagnosis. The jab, if even intentional, is subtle, and Axelrod's portrayal of Emma -- and the way she chooses to cope with the various issues encroaching on her life, including occasionally burning herself -- is unflinching but empathetic. As the uncertainty in Emma's life extends from her mother into her relationship with Daniel, stability seems to be moving further away by the hour. When Emma becomes involved with a friend of a friend whose brother is staying in the same facility as her mother, she is thankfully spared any moralizing, both from those around her and the narrative itself. Axelrod doesn't just refuse to judge, she shows how natural and understandable Emma's choices are.That isn't to say that her actions don't ultimately have consequences, but Emma's world is a considerably different place from that which bore Anna Karenina, the Tolstoy novel that provided The Law of Loving Others with its title. Of much more importance is how Emma perceives herself, her own circumstances, and that she finds the hope in what to teenage eyes could only seem like a hopeless situation. Axelrod vividly captures the emotional peaks and valleys of that fraught age with nuance and the knowledge that level ground lies ahead.Kate Axelrod was born and raised in New York City. She has a B.A. in Creative Writing from Oberlin College and a Masters in Social Work from Columbia University. She has written for Nerve.com, Salon and various other publications. She lives in Brooklyn and works as an advocate in the criminal justice system. This is her first novel.