The Last Brother by Nathacha Appanah 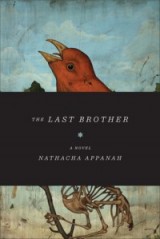 There exists a brand of individual whose life comes down to a story: men and women whose lives are irrevocably defined by a series of indelible childhood events. We know little of the life story of Raj, the protagonist of Nathacha Appanah's The Last Brother, published by Graywolf, except that he is one of these people—he has been shouldering a ghost through his life, a blonde boy named David, in the form of a small red box and decades of fraught dreams. Raj suffers from a common curse among those who are stranded inside a childhood story; he confesses that he has “led a plain life...[has] done nothing remarkable.” In The Last Brother, he finally finds redemption by sharing the events that transpired in his early days. At nine, Raj is living in poverty in Mauritius, an island nation off the coast of Africa. His only two brothers died on the same day when he was eight, and his father, prison guard, is a brutally abusive alcoholic. The remains of the family live in an isolated house “sunk deep in the woods” and subsists off a shabby garden while avoiding vermin who eat their food and nibble at their toes. Raj spends most of his time hiding and talking to himself. One of his hiding spots is near a prison, where the Indian Raj sees aliens being herded around—white prisoners, including an angelic blonde boy his own age. Raj befriends this boy, David, when he lands in the hospital after a particularly brutal beating by his father. Soon, a storm sends the prison into chaos and Raj drags David along with him in a doomed escape from reality. Nathacha Appanah, whose simple yet poetic French is translated by Geoffrey Strachan, does a good job of making Raj's story resemble a childhood fantasy come-to-life. David's exotic juxtaposition of whiteness and misery in a land of dark-skinned poverty, Raj's mother's healing elixirs, and the powerful island storm that uproots the prison are all imbued with magical qualities. Raj chooses David as a friend and fellow fugitive because he represents something fantastical. Even though David is just as poor, just as doomed as Raj's late brothers were, he is something different—he is white, he speaks a strange language, and is from a distant land called Prague. David's almost supernatural otherness is just what Raj's all-too-real daily misery is starving for.Of course, imbuing a mere human in mere human circumstances with mystical power has its pitfalls. Eventually, Raj learns that David is mortal, and that he was on Mauritius not by magic, but for an odd but all-to-tangible historical reason that is coldly related in a newspaper clipping. Raj endures a cruel amount of punishment during The Last Brother, but his worst moment may be when he reads a article that relegates David's people to a footnote among the many victims of World War II. Raj's lifelong, deeply repressed need to tell David's story—to conjure his life from newspaper clippings and classified British army files—is as heavy a weight as David's dying body was, deep in the woods, at the end of the boys' tragic escape.Though I read The Last Brother as a story about taking and losing possession of a story, there are many other possible interpretations here. It's a gift of Appanah's timeless style and rigorous deployment of symbolism. You will be drowning in repetitions and recurring symbols such as heavy loads, water that redeems and destroys, and captivity enforced and pursued. The weakness of this book is Appanah's occasionally heavy-handed pursuit of mythic power. Still, she wisely keeps the book short enough that her symbolism doesn't get too tiring, and has a unique capability to offer a variety of readers something to latch onto. As such, the book is largely successful. Appanah gives powerful life to forgotten victims of a tragic war, and in so doing reminds us that every story, no matter how obscure, can change a life.Nathacha Appanah, a French-Mauritian of Indian origin, was born in Mauritius and worked there as a journalist before moving to France in 1998. The Last Brother, her fourth novel, won the Prix de la FNAC 2007 and the Grand Prix des Lecteurs de L'Express 2008.