Barbara Browning's exciting debut novel, The Correspondence Artist, published by Two Dollar Radio, revolves around four love stories, all of which are actually the same love story, but none of which are the real, or true, story. Confused? 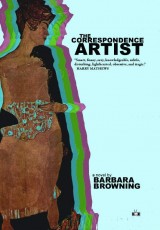 Barbara Browning's exciting debut novel, The Correspondence Artist, published by Two Dollar Radio, revolves around four love stories, all of which are actually the same love story, but none of which are the real, or true, story. Confused? The novel begins simply enough—“It isn't easy to be the lover of a great artist—particularly if you harbor any ambition of being an artist yourself.”—with a set conflict: Two artists, one greater than the other, in a romantic entanglement. But things quickly become complicated. More difficult than being the lover of a great artist, the narrator tells us, is protecting his anonymity. And so we embark on the real project of the novel: to convey the truth of a love story while concealing all the facts. The narrator protects the paramour's identity by describing four, distinct love affairs. While the facts of these affairs are wholly fictional, the emotional drama is not. Each vignette is meant to capture a distinct aspect of the paramour's personality, until, through the combined efforts of these various tales, we are left with a pretty good idea of what went on, both emotionally and in the narrative. Still confused? Well, it begins simply enough.The narrator falls in love with Tzipi, a sixty-eight-year-old Israeli writer. However, after a miscommunication that leads to a disaster on a Greek isle, the affair begins to wind down.She also falls in love with Binh, a young Vietnamese conceptual artist. Then, after a miscommunication that leads to the broadcasting of a disastrous video, the affair begins to wind down.She also falls in love with Santuxto, an exiled Basque separatist, and Djeli, a world-famous Malian musician. But, after miscommunications that lead to disasters, both affairs begin to - well, you get the point.The same plot repeats itself fourfold. It is a testament to Browning's dexterity that she has built interchangeable and parallel narratives that feel utterly their own. It's an ingenious conception, a new take on the literary tradition of the re-telling, a mix-and-match narrative structure. But the structure's complexity is also its shortcoming. The narrator emerges into the text regularly to remind us of the rules. Lines such as, “I've gotten attached in different ways to all of the characters in this novel,” and, “Of course it didn't happen like that...” are imbedded throughout the text like narrative instructions. There is a purposeful self-awareness to these interjections, but they also point to a weakness in the overall construction. The book cannot simply be read. It must be read like this, or like that. That said, there are moments of vibrancy and emotional liveliness that carry the reader. Lines like, “I forgot to thank you...for saying that I'm smart and my body is beautiful. Thank you,” and, “My sex is like a ripe fruit. Persimmon. Not even I could resist. This made me think of you.” These are two of many that cut to the heart of the narrator's affair with the paramour. They comprise the emotional reality, and the core, of the book. Though it is overly aware of itself and its intentions, the story's push and pull of truth and fiction, this “fort/da,” has an altogether remarkable effect.In addition, Browning's writing is truly sexy. Playful and evocative, it captures the obsessive nature of love in a way few authors manage. Though her prose is akin, say, to that of Dave Eggers or Chuck Palahniuk, there is a vulnerability and poeticism to it as well; a ruthless confidence and powerful restraint reminiscent of D.H. Lawrence or Toni Morrison—two of the sexiest writers of the last century. Whether fighting Dengue fever, knitting iPod holders, or attending a pillow fight in New York City's Union Square, Browning transports her readers entirely.The Correspondence Artist is a smartly complex and surprising work of art. More than being simply a “novel” in the traditional sense, it takes that term a step further, existing in form as something truly innovative and new. Part memoir, part fiction, part epistolary, part metadata-existentialist philosophy, part art installation; the sum total is a triumph of a debut. Barbara Browning has a PhD from Yale in comparative literature. She teaches in the Department of Performance Studies at the Tisch School of the Arts, NYU. She's also a poet and a dancer. She lives with her son in Greenwich Village.