The Coffins of Little Hope by Timothy Schaffert 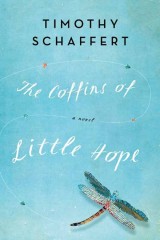 In the 262 pages of The Coffins of Little Hope (Unbridled Books), Timothy Schaffert packs 61 chapters, 11 “parts,” a kidnapping drama, a bestselling children's fantasy series, a local newspaper's struggle to survive, and an overflowing small town milieu including an elderly obituary writer, an eccentric newspaper editor-cum-magician, two precocious children, two eccentric celebrity authors, an aloof artist mother back from Paris, various cult members, and many others. Schaffert's plot items and characters adorn his plot like quirky trinkets in a cluttered general store. The business of Coffins begins when Essie, an 83-year-old obituary writer starting to feel her age, begins digging into a local mystery: a young girl, Lenore, has been kidnapped from her mother by an enigmatic, strangely charming man named Elvis. This kidnapping story, however tragic, has been giving life to Essie's small, aging Nebraska hometown. The local paper, the County Paragraph, covers the case closely and attracts a national readership, the twists and turns of Lenore's story make national news—a cult of “Lenorians” even sprouts up. Unfortunately, as Essie digs into the story, it becomes less clear if there is anything to Daisy's tragic story. Has Lenore ever existed? Just as the steam is running of the kidnapping drama, the town's other source of income and civic pride—the secret publication of a popular children's series—is also dying. The final entry of the series has left the town's printing press, and—to the town's shame—a copy of the book may have been leaked. Schaffert's abundant plot never becomes tiring, largely because of its cozy familiarity. Coffins has trappings of a book one would read under a quilt: quaintness, eccentricity, wistfulness, and cotton-candy-light humor. Even the more serious undercurrents of the story—our obsession with stories of fantastical tragedy, the difficult yet often mundane inevitability of death—are careful not to cut too deep and distract readers from the book's gentle reverie.Schaffert seems to embrace the weaknesses of the book's particular genre: his characters are tried-and-true “eccentric small town” types, plot strands latch onto reliable trends, and the darker thematic paths Schaffert meanders down have been well-travelled. Still, the book is big-hearted: Schaffert's ability to care so deeply for these characters, to convey so much investment in such a plot, is impressive. Essie would not be as charmed as some readers will be by Schaffert's celebration of small-town-mystery conventions. This is apparent towards the end, when the Lenore story runs out of gas and the County Paragraph runs out of readers. The Paragraph editor, left without a serious story to cover, decides to shut down the paper. He plans to sell the publication's treasures in a touristy “general store” and practice magic full-time. Essie is depressed by this turn of events, insisting that even an aging, cookie-cutter small town deserves more than sleight-of-hand and a knick-knack shop that celebrates all the typical trappings of places—and stories—like this. She has a point. There's little doubt this book's readers will glide through the rolling hills and valleys of Coffins, fall in love a bit with its cast, feel a bit of heartache for its little deaths, and move on quickly after finishing.Timothy Schaffert grew up on a farm in Nebraska and currently lives in Omaha. His short fiction has been published in several literary journals and he's won numerous awards, including the Mary Roberts Rinehart Award and the Nebraska Book Award. He is the author of two other critically-acclaimed novels, The Singing and Dancing Daughters of God and Devils in the Sugar Shop.