This autumn witnesses a wonderful event in the world of literature: the re-publication of a forgotten classic. 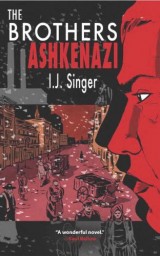 “Don't you know? It always ends with Jewish heads bleeding."

This autumn witnesses a wonderful event in the world of literature: the re-publication of a forgotten classic, Israel Joshua Singer's The Brothers Ashkenazi. Lost to the English-language reader for too long, this new edition from Other Press resurrects the untouched 1980 translation – from the original Yiddish – by the author's son, Joseph Singer. Difficult to find in even the most dedicated bookstores, those with a desire to read The Brothers Ashkenazi had to settle for worn, second hand copies; a most undeserved end for such a rich and timeless work, one that intertwines trenchant character-driven fiction with the tumultuous milieu of turn of the century Poland.The novel opens with a short, lyrical introduction to Ã…ÂÅídÃ…Â_, the Polish city where the Ashkenazi family has settled. Dramatic change has hit Ã…ÂÅídÃ…Â_. As in other cities of the period, the industrial renaissance threatens the traditional shtetl life of its Jewish inhabitants. Uncertainty and threats from secularization, capitalism, greed and other ‘European' influences are brought to the city. From the start, The Brothers Ashkenazi is really about how society copes during overwhelming tensions created by an ever-changing historical tide, one that Singer's Jewish characters in particular are suffocated by:

The town of Ã…ÂÅídÃ…Â_ grew from day to day. The first Jews to be granted the right to open weaving workshops had achieved this by adopting gentile ways and toadying to the authorities. But inevitably, ordinary observant Jews followed suit. The Russian officials who descended upon the country following the suppression of the Polish uprising were most eager for the bribes and gifts of Jews who sought permission to live and do business in prohibited areas, and soon Jewish looms clacked away in the old section of Ã…ÂÅídÃ…Â_, even though the Germans still barred Jews from their guild.

The central voices in the novel belong to the twin Ashkenazi brothers – Simha Meir, the elder by five minutes, and Jacob Bunem. Before they are born, their strict and pious father, Abraham Hersh Ashkenazi, receives a prophecy from his rabbi that will also turn out to be a prophecy for Ã…ÂÅídÃ…Â_: “'Your generations shall be men of wealth.' This disturbed Abraham Hersh Ashkenazi, and he quickly said, ‘I would prefer them to be God-fearing men, Rabbi.'” From the outset, striking differences exist between the brothers. Simha is a cruel, sickly, clever and unpopular child, with a preference for solitude. His brother is a popular figure (especially with the local girls), confident and good-natured, though somewhat slow-witted. From an early age Simha Meir's intelligence is nurtured by his family and he is sent to study under a more learned and deeply pious rabbi than his brother. By the time of the brothers' Bar Mitzvah, Simha's genius is known and reputed throughout Ã…ÂÅídÃ…Â_ society. Indeed, Jacob Bunem's personality never really develops beyond Singer's early descriptions; he remains, “normal for his age, an average student who showed no exceptional promise.” Unsurprisingly then, it is through Simha's world of schemes, jealousy and manipulation (representing the pejorative stereotype of European Jewry), that Singer chooses to present his rather skeptical critique of bourgeois Jewish life in Eastern Europe.Upon abandoning his devotion to religious study, Simha Meir soon becomes a leading figure in Ã…ÂÅídÃ…Â_. Through marrying the daughter of a successful German weaver – Heinz Huntze – he gains a foothold in the weaving industry. With a Machiavellian approach, which includes money laundering and encouraging economic patricide, he soon ensures dominant control over Huntze's mills. Eventually, he branches out and establishes more mills in the east of Ã…ÂÅídÃ…Â_, making his wealth from sweated labour. Simha's insatiable desire to succeed is further buoyed by the good fortune of his brother, who marries into the family of an infamous and wealthy Warsaw ‘Eisen' family – with their backing, Jacob establishes his own business empire. Both brothers shed their Jewishness and become increasingly European throughout the novel – Simha even changing his name to Max.The elder brother of Nobel-celebrated Isaac Bashevis Singer, I.J. Singer wrote The Brothers Ashkenazi after successfully emigrating from Eastern Europe to New York in 1934. The novel was published two years later. For pre-Shoah, European Yiddish literature, it was a change for an author to move readers away from introspective Shtetl-tales. Instead, Singer thrusts his characters into a sweeping modernist narrative. Certainly, he is more comfortable writing about historical implication and social politics; at times, the protagonists seem so emotionally detached from one-another, that the reader will struggle to feel any empathy at all. Yet the prose is precise, daring and even witty and playful. Passages that may appear mundane are sprung to life through scathing satirical humor:

The day was long, but for the boys it was never long enough. They crawled over the sand flats where dragoons drilled while noncoms pounded their legs with their scabbards. They assembled in the marketplaces where the town crier beat his drum and reported all manner of official tidings: who had been the victim of burglary, who had lost a pig, who had been sentenced to prison, whose candlesticks or bedding were being sold in lieu of taxes. Finally, they entered the red-light district – a narrow street where only recently brothels had sprung up. Prior to that, people had gathered here from all over to fulfill their natural functions under the open sky. Now small flimsy shacks with slanted attics and low windows stood here. If someone came to urinate or defecate out of old habit, the pimps and brothel owners would beat him up.The boys knew that this was out of bounds to them, and this very fact drew them there. They ran through the narrow little street stole covert glances at the bedraggled Jewish and gentile wenches sitting on the thresholds, cracking seeds. Not that they had any intentions of coming close to these girls, God forbid. Still they loved to hear the girl's entreaties: “Come on in, boys, you'll enjoy it. . . .”

In order to be successful, Simha Meir and other characters have to abandon their Judaism – success lies in the non-Jewish community. Along with the Ashkenazi brothers, no character emphasizes this more than Nissan. The son of a rabbi and Simha's frequent nemesis, Nissan is cast out by his father for reading secular texts. Becoming a trade unionist, the Russian Revolution allows for him to rise to a position of influence, in comparison to Simha's eventual downfall, owing to loss of wealth and status after being labeled bourgeois. The revolutionary fever by the end of the novel causes a dramatic change in social morals. Amidst the chaos, law and order breaks down and a pogrom ensues. Despite their successes in the secular world, Nissan, Simha and most horrendously Jacob, are persecuted solely for being Jewish. Ã…ÂÅídÃ…Â_'s post-War downfall acts as a symbol of fate for the Jews. Even if traditional Jewish shtetl life creases to exist, and they enter the modern world, there is no safe place to be Jewish. The shield of social status and secular life will not protect them against anti-Semitism. To Singer, Jewish civilisation has developed separately to the rest of Europe. History has allowed it to grow, but continually strikes it down. Whether you agree with Singer or not, The Brothers Ashkenazi is a near-perfect monograph of early twentieth century Jewish life in Eastern Europe and one I heartily recommend.

I.J. Singer was born in 1893 in Poland. He was the author of the novels Steel and Iron, Yoshe Kalb, The Brothers Ashkenazi and The Family Carnovsky, as well as a correspondent for The Forward. He died in New York in 1944.