THE BLOOD OF HEAVEN by Kent Wascom 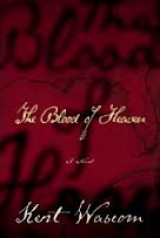 Heroism is one of those things that you can see only if you don't look at it too closely. Even though we know better, Americans still want to view the earliest decades of the American republic as heroic, so we try not to look too closely at these years, preferring to think of them only in the vaguest of terms and gauziest of images, as though the late eighteenth and early nineteenth centuries consisted mostly of white male gentleman farmers standing around debating the work of John Locke, carefully constituting the Constitution and making only, oh, a minor oversight or two. In his debut novel, The Blood of Heaven (Grove Press), Kent Wascom shows us what we should but don't expect to see: suffering, gore, and religious fanaticism. The novel's “heroes,” such as they are, are preachers-cum-bandits, and one of them asks a question that Americans haven't managed to stop asking: “How could we not be like those first and greatest preachers and go well-armed?”When we meet the novel's narrator, Angel Woolsack, he is a dying old man, a slave merchant in New Orleans at the dawn of the Civil War. In the first paragraph—which reads at first as though straining for shock value but which is actually a skillful introduction of the novel's themes—he stands on a balcony regarding the crowd below (“Suddenly gifted with a new country, they are like children at Christmas”), and pisses blood down onto them. Soon, Angel takes us back to his early childhood, which passes in the shadow of a father “so godly he wouldn't let me call him Father, just Preacher.” Preacher-Father, who, like many American men of God, is at least as sadistic as he is devout, forces Angel to atone for minor transgressions by holding hot coals in his mouth. After an early love affair ends in florid catastrophe, Angel joins another family, the Kempers, who spread the word of God the way it has often traditionally been spread: through killing and theft. Along the way, Angel falls in love with Red Kate, a prostitute of Irish descent whom Angel calls “my Copperhead” and at whom he hurls a succession of anti-Catholic insults. (That his affection for her is nonetheless real and deep is mark of Angel's, and the novel's, complexity.) As the gang travels through Natchez, West Florida, and Louisiana, they stage bloody raids and dabble in the slave trade. An enthusiastic killer, Angel crows about one victim that “if we had found [him] in a cave full of lepers eating his own foot, it still would have felt good and righteous to kill him.” A few paragraphs later, he tells us that this man, trampled by the Kempers' horses, “screamed at first but soon the sounds he made were of gory air being forced from his crushed bellows.” Finally, Angel and the Kempers fall in with some followers of Aaron Burr, the disgraced former vice president who is trying to carve a Utopia out of Mexico. The terrifying preachers who populate this book recall the work of Flannery O'Connor, particularly The Violent Bear It Away, but this is mostly a red herring, since O'Connor's work derives much of its power from the unnerving sense we get that she is endorsing her psychotic fundamentalists, whereas we never feel that Wascom is anything other than a good liberal doing an impressive ventriloquist act. (This is all to the good; one O'Connor is all we can take.) The Blood of Heaven's prose also frequently recalls the biblical flourish of Blood Meridian, but Wascom eschews that book's overriding bleakness, preferring instead to carve out a place for love. The focus here is less on illustrating that when God made man the Devil was at his elbow than it is on the poisonous effects of American dreams. Burr and his Utopia are present mostly through letters, recalling the desperate and persistent American hope that all answers will be found in a text, be it the Bible or the Constitution. Angel, a killer, wants to be a visionary, and the force of the book lies in the failure of that ambition. If the middle section drags amid the raids and overplotted plots, the novel more than recovers in its final quarter, in which a burial forces Angel to confront his illusions. (There are many beautiful sentences towards the end that are impossible to quote in a review because they count as spoilers.) Angel is engaging company, a character we can't help but like, and though it says nothing good about America's progress that we can still be seduced by a killer and slave-merchant with a coal-burnt silver tongue, this is precisely Wascom's point. The myths of the founders are our myths, too, and they are myths that I hope Wascom continues to aim at. Kent Wascom was born in New Orleans in 1986, attended Louisiana State University and received his MFA from Florida State University. He was awarded the 2012 Tennessee Williams/New Orleans Literary Festival Prize for Fiction. The Blood of Heaven is his first novel.