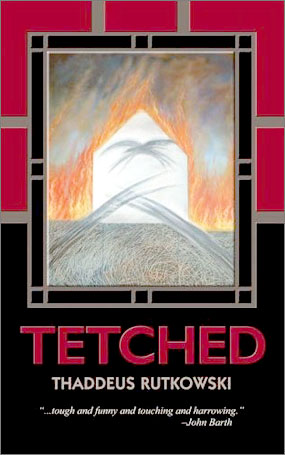 Thaddeus Rutkowski's novel Tetched is described by the author as "a novel in fractals." And indeed, it is in the structure where much of its allure lies. Rutkowski has created a work both suitable for short attention spans and reminiscent of performance poetry in its quick, fierce language. The narrative is conveyed through serial vignettes that are satisfying in themselves, but also amalgamate to depict a series of significant periods of the narrator's life.

Our first introduction to the narrator, who remains unnamed, is a list of lost beliefs that reveals his perpetual disappointment. "I believed that I could live with someone who did not sympathize with my obsessions, as long as I loved that person deeply enough," he says. However, after a series of failed relationships in adulthood, the narrator realizes the women who fail to sympathize with his obsessions also fail to understand his past. Amid terse language, readers must reach this conclusion on their own.

The danger of Rutkowski's fractal composition is that its brevity necessitates the reader to fill in the emotional content; throughout, we can only surmise how the narrator feels. Though this successfully reflects and highlights the narrator's ambivalence, it also leaves me, as the reader, sometimes unable to connect with him. This is particularly true when he writes about his relationships with women: he portrays women as excessively repulsive and heartless. One woman, who changes her seating assignment on a plane so she doesn't have to sit next to him, even earns the nickname "Snake." Though many of the narrator's descriptions of women are severe and hard to believe, perhaps this is intentional. As the title suggests, something about the narrator is a little off, a little "tetched."

"I want to invent the next Hula-Hoop," the narrator's father proclaims in one scene. These unrealistic desires, in combination with his father's artistic failure and alcoholism, create a sense of self-loathing in the narrator that becomes a need for punishment. And as a child, he begins to experiment with masochism. He hangs himself by the wrists, scourges himself with his sister's riding crop, and ties his ankles together with rope. This develops into an adult obsession with bondage, and an underlying fixation with undoing his father's emotional influence.


Throughout the novel, I found the narrator's "tetched" voice to be addictive. A line like "I shut my mouth and tried to breathe quietly, through my nostrils, like everyone else," both illustrates the narrator's detachment and motivates me to turn the page to hear more of his litany. The structure quickly pushes the reader forward into new emotional territory. It succeeds in making a disturbing story go down smoothly and helps me to accept a narrator who doesn't grow. Paralleling the book's incipient list of disappointments, the penultimate chapter is a list of remembered moments from the narrator's childhood. These are the haunted moments that have left him mentally imbalanced. While I didn't always sympathize with him, the narrator's voice was well reflected in the book's structure. Underlying his narrative, keen emotions strive to come to life. But they are barely visible. The reader who wishes to see them, will have to drag them into the light.