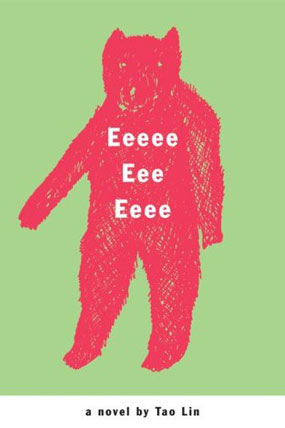 
Who is Tao Lin? Notorious for his weird monotone readings (and online suicide threats), hated by Gawker for his shameless self-promoting spam emails (dragging Miranda July down in the cesspool with him), simultaneously liked and disliked for his popular blog Reader of Depressing Books, he is either the newest "it" boy of the literary scene or its latest joke. His ego certainly seems to rival David Eggers, but what about his writing?

Admittedly, I was turned off initially by Melville House's bold move to publish Lin's novel and short story collection at the same time--the first two-book debut of a novel and a story-collection since Ann Beattie in 1976. But in the end, I have to say that Eeeee Eee Eeee is one of the first novels in a long time that made me laugh out loud--a wonderful, honest and cathartic laugh. Finally, someone published something written by a young person about a young experience that feels organic and real and doesn't totally suck!

Although the book is basically the story of Andrew, a pizza delivery boy and his acquaintances, nothing exactly correlates in Eeeee Eee Eeee. In a scene typical of the novel, Andrew delivers some pizza, thinks about rafting around the Canary Islands with his ex-girlfriend Sara, and then talks to a bear who offers him free money and a laptop computer. What makes the book work is that through this nonsense, Lin gets to something honest about everyday existence and moments of pure, sharp beauty come into focus. A dolphin muses on melancholy. The President waxes philosophical. A very small story about nothing grows into a novel. It doesn't hurt that Lin is a fantastic writer--his prose is energetic, kinetic, and clever.

In one noteworthy scene in Eeeee Eee Eeee, a character, Steve, compares Jhumpa Lahiri to Robert Altman. He says, speaking of Gosford Park: "It won every award ... because the director is a hundred years old or something. It's the Jhumpa Lahiri of movies." Andrew thinks: "Doesn't make sense. Oh well." But even though the comparison doesn't really work, the association seems funny. Suddenly Jhumpa Lahiri becomes an inside joke for the two boys. She is no longer a person. Instead, she is a joke, a symbol; she is nonsense. Comedians often say that something becomes funnier if you repeat it three times--this is part of what is happening here but there is also something more at work. Icons are absurd. Targets become targets for a wealth of reasons. "Jhumpa Lahiri" is fun to say out loud.

Tao Lin's short story collection, Bed, is a different experiment and I almost prefer it to Eeeee Eee Eeee. His influences here come into sharper focus. This is the territory of the young -- college students, graduate students, recent graduates -- and the stories are mainly concerned with the characters' romantic relationships. In structure and tone, they have the feel of early Lorrie Moore and Deborah Eisenberg. Like Moore's characters, there are a lot of plays on language and within each story, a return to the same images or ideas -- or jokes. And like Moore, most of these characters live in New York, are unemployed or recently employed, and are originally from somewhere more provincial (Florida in Lin's case, Wisconsin in Moore's). However, Lin knows to dig a little deeper into his characters--something we see in Moore's later stories, but less so in her early ones.

Unfortunately, it is difficult to write stories like this without succumbing to a little preciousness, and Lin doesn't entirely escape this. Sometimes his painfully earnest insights feel a little dull and although each story is terrific, if you've read one, you get the rest. Still, there aren't many who can mimic Moore and get it right. There aren't many who can write this well, period.

So say what you will about Tao Lin. He may grate on you, he may be a shameless self-promoter, but he's got something worth promoting.

Tao Lin is the author of the novel Eeeee Eee Eeee and the story collection Bed, both published by Melville House, as well as the poetry collection you are a little bit happier than i am from Action Books. His blog is Reader of Depressing Books.