TALKING TO OURSELVES by Andrés Neuman. Translated by Nick Caistor and Lorenza Garcia. 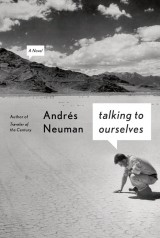 In Talking to Ourselves (Farrar, Straus and Giroux), Andrés Neuman follows the illness and death of a young father, Mario, through the different voices of three characters as they perceive it. There is Mario himself, in audio recordings made for his ten-year-old son, Lito. Then there is Lito's stream-of-consciousness, as he and Mario take their first, and only, road trip together before Mario's cancer hospitalizes him. Finally, there are the journals of Mario's bibliophilic wife, Elena. Switching effortlessly between those registers, Neuman's prose captures the distinctive cadences of each while revealing the gulfs between their experience of the same period in time.Embarked upon after Mario stops chemotherapy treatment for his cancer, Mario and Lito's road trip is a defining moment in Mario's illness. Free of the drugs, his body temporarily regains strength before taking its final plunge. Mario has chosen not to tell Lito that he is ill, preferring his son to remember him as he was when he was healthy. All of Mario's recent issues are sketchily attributed by the family to a lingering flu, in order to allow Lito's experience of the journey to be unblemished by the expectation of death. It stands in for all of the landmarks to come in Lito's life that Mario will miss: “For me the last day of our trip was, how can I explain, sad and at the same time a relief, do you understand?, we'd done it, no one could take that away from us.”Sitting in the passenger seat day after day watching the landscape, and untroubled by worries about his father's health, Lito's wandering mind ping pongs from his imagined ability to control the weather to the charms of a new watch to strategizing about a video game. He is aware that he is growing up and accessing new privileges now that he is ten, from this long-asked-for drive with his father (a part-time trucker) to being allowed to sit at a bar and order a drink (a soda) alongside Mario. The boy's understanding of what this long-anticipated adventure means is sharp but incomplete: for him the privilege is a rite of passage related only to his coming of age. Shortly after they return from the road, as Mario worsens and must be hospitalized, Lito is sent away to live with his grandparents for the summer, where he will ultimately receive a phone call about his father's fatal "accident" on the road.Of the three narrators, Mario is the most remote. He has already passed from feeling that he belongs among the well, and claims his true face is "the face of a condemned man." Once he is in the hospital, the affairs of the living seem like a "daily performance," especially where they come into contact with his own life. Increasingly, Mario's attention is drawn more and more to his own body, now his enemy. “Lying in these beds, you realize the depth of the body, the soul, or whatever, is completely secondary, you put it on hold straightaway, your physical reality is the most pressing, complex thing.”He cannot occupy the present fully, inhibited by his illness, and knows that the future he can think of does not include him. His sentences wander, drifting off in the middle of an idea; not in the hyperactive manner of Lito's racing mind, but because he no longer has the energy to marshal his thoughts. Mario remembers snippets of the early days of his courtship with Elena, only fully appreciating the value of her love now that it is soon to be lost, and imagines what he can of the man Lito will become.

Elena's voice is the most vibrant and in-command. Even as the grief becomes too much to control, she watches her dissipation with an objective, discerning eye. A consummate reader, she turns to books for an understanding of what is happening. In her journal, she copies lines that speak to her, underlining them in the original text and using them as fodder for her own thoughts.

Last night I took with me to the hospital an essay Virginia Woolf wrote about her own illness. I was curious to know whether this text would guide me or drag me down further. Yet I sensed I was going to find something there. Something in the language Mario now speaks.

Her ceaseless probing of literature for the key to experience is coupled with a more escapist tendency. Mario's doctor, Ezequiel, invites Elena to dinner at the start of the road trip, after Elena visits him to ask whether Mario is truly well enough to travel. It turns into a passionate affair immediately, full of "excitingly ugly" vulgarity. It is less a betrayal (though it is that) than a flight. Elena welcomes Ezequiel's attentions with an animal gladness, using their encounters less to cope with the fact of Mario's impending death and the physical decline than to run from it. She returns to literature to face it, and retreats to the body to flee from it.

With Ezequiel as a pretext, through his body, I had allowed myself to go wild. His healthy young body. Distant from death. As I write this I despise myself, but sometimes Mario's body disgusts me.

One family, three stories: no matter the strength of the love between them, each member of the domestic unit perceives their journey together differently, and exits at different points. Finely attuned to every register of feeling and never dipping into mawkish sentimentality, Neuman captures this truth lightly and gracefully. He pays powerful tribute also to literature and the invaluable company of the words and thoughts of great writers on a subject, illness and death, which is otherwise isolating in the extreme. Yet he knows better than to say that those words are enough. Life is still to be loved outside of them, life after the loss of a husband and father.Andrés Neuman was born in 1977 in Argentina, but now lives and works in Spain. Neuman has published numerous novels, short stories, essays and poetry collections. His first novel to be translated into English, Traveller of the Century, was awarded the Alfaguara Prize and the National Critics Prize, and was shortlisted for the 2013 Independent Foreign Fiction Prize.