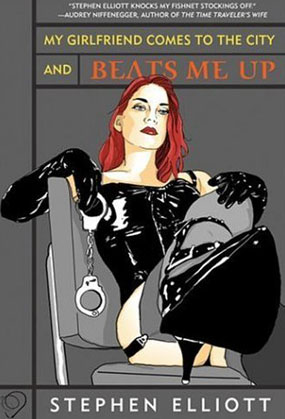 Cleis Press, October 2006, 144 pages, $13.95The real question in Stephen Elliott's short story collection My Girlfriend Comes to the City and Beats Me Up is not whether these tales are autobiographical or not (though Elliott admits that many are true, or mostly true, in his introduction), but whether Elliott, as narrator, consents to and likes the kinky acts described therein. In powerful, waste-no-words prose, Elliott takes readers on a guided tour through the underbelly of San Francisco and his narrator's sex life, mental state, and troubled childhood. The city of the book's title plays a major role in these stories, but Elliott is clear to distinguish his version of BDSM from the "safe, sane, and consensual" model best embodied by the City by the Bay's kinksters. The power dynamics behind his interest in kink make this an emotionally compelling, disturbing and vital read.

Elliott often asks questions to which there is no answer. In the title story, his girlfriend comes to visit and duly beats him up, but her words strike the harshest blows. When she says "I'm not your mother reincarnate," his immediate reaction is: "And I'm thinking why would she say that? Who would say such a god-awful thing." He pushes himself into unfamiliar situations, constantly questioning what he wants from them. It's clear that, for Elliott, BDSM is both a physical act and a pathway to some emotional salve. He looks to strong, dominant women to steer him toward where he should go. In the opening story, "First Things First," he writes, "She didn't ask what I liked, which was good because I had no idea what I liked or what I was into or what I wanted to do or wanted done to me." This theme reappears even as he gains understanding of why he craves submission and what he prefers, much of which involves offering himself to women to take, test, and hurt.

Elliott throws traditional erotica to the wind and complicates matters, mixing emotional pain and physical pleasure until it's unclear where one ends and the other begins. He doesn't separate sex and kink from Real Life, so in the middle of a story about wearing a gas mask, he associates his suffocation with what's happening beyond their limited play space: "We don't know that her husband has been leaving messages on my phone. Her mother is OK. Her mother doesn't have cancer. It's just scar tissue. The phone is turned off. I can't breathe and I'm shaking my head, no no no no." The words rush until, finally, she praises him with, "Good boy," and for the narrator, "It's the only thing in the world worth hearing." It's these statements of pure, raw need, the kind that we so often cover up, that make this slim volume a keeper.

Perhaps the message here is that even if what we want and need sexually is not truly safe, sane, or consensual, it's our right to pursue it; in Elliott's world, pain is a prism through which he sees himself anew. These interconnected stories will likely make you flinch, recoil, and marvel not just at Elliott's ability to transform his past into an aggressively kinky present, but also his remarkably simple yet ruthlessly honest way of bringing sex onto the page as part and parcel of the drama, pain, and work of life itself. By pushing readers, and himself, into the darkest places he can go, he shines light on the often-hidden lives of submissive men and forces us to confront all the ugliness and beauty contained therein.

Stephen Elliott is the author of five books including Happy Baby, a finalist for the New York Public Library's Young Lion Award as well as a best book of 2004 in Salon.com, Newsday, Chicago New City, the Journal News, and the Village Voice. His work has been featured in Esquire, the New York Times, GQ, Best American Non-Required Reading, Best American Erotica, and Best Sex Writing 2006. He is the founder of the Progressive Reading Series and the executive director of LitPAC, a literary political action committee. He lives in San Francisco. Visit him at www.stephenelliott.com.