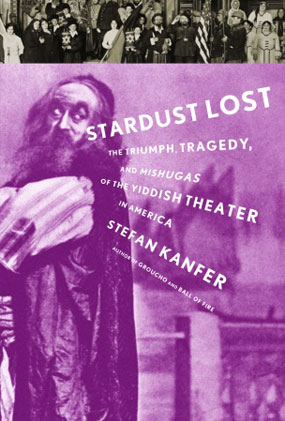 Knopf, October 2006
352 pages, $26.95
Stefan Kanfer just might know every detail of the last 150 years of Eastern European and American Jewish history. In Stardust Lost, he manages to fit most of that history into less than 300 pages, and to connect all of it to the once opulent institution of Yiddish theatre, from which the titular stardust emanated for over 100 years.

Kanfer tells us that Yiddish theatre was born in the Russian Empire during the heights of Czarist oppression of the Jews in the Pale; the worse-off the shtetl-dwellers were, the more they wanted an escape, not from their problems, but "into" them. For the green immigrants of the Lower East Side, theatre spoken in the mame loshen (mother language) provided a connection to their native culture-and the suffering they had known, and which their families still knew in the towns of Romania, Poland, and Ukraine.

Stardust Lost's timeline is spiked with historical irony. Yiddish theatre's audience, and its cultural importance, flourished during what was arguably the darkest period in Jewish history since the Romans expelled the Jews from Palestine. The theatre's strength as a political medium peaked during the years of the Holocaust, even as its global audience was sent to the slaughter. But by the end of the war, in the second half of the 20th century, American Jews had achieved a stable footing in the New Country; second, third, forth generation Jews abandoned Yiddish, and with it, the dramatic art that had entertained their forbears. The Yiddish venues that had lined Second Avenue began to shut down as Jews sought more relevant diversions. In the newborn State of Israel, the Yiddish language was rejected outright. The latest iteration of the Jewish Diaspora wanted to leave the dark memories of the shtetls behind, and look ahead to a modern, independent future.

Though Yiddish theatre is no longer the cultural force it once was, Kanfer's book is not a dirge. It reads more like a family tree that starts with the patriarch of Yiddish theatre, the auspiciously named Abraham Goldfaden. Family trees don't end; they grow, banyon-like, with increasingly complicated configurations. Kanfer, as author-cum-genealogist, recognizes that no matter how anglicized, bastardized, or intermarried it becomes, the influence of the Yiddish theatre, with all of its tropes, melodies, and shticks - can be found in contemporary American culture. Songs from the Yiddish theatre like "Bei Mir Bist Du Shein" were adapted and popularized by Americans outside of the Lower East Side; Marlon Brando's method was learned directly from Yiddish dramatic stalwarts. The plaintive stichomythias of "Seinfeld" are echoes of the shlimazels in old Yiddish comedies.

Pick up Stardust Lost, read it over a glass of tea at a Second Ave. café (or at your local deli). If Kanfer's exuberant rendering of Yiddish theatre's history makes you wistful, don't feel blue; just watch "Curb Your Enthusiasm" or "The Aristocrats," and you'll see Goldfaden's heirs in action.

Stefan Kanfer is the author of The Eighth Sin, A Summer World, The Last Empire, and Serious Business. He was a writer and editor at Time for more than twenty years. A Literary Lion of the New York Public Library and the recipient of numerous writing awards, Kanfer is currently in the Distinguished Writer program at Southampton College, Long Island University. He lives in New York City and on Cape Cod.

Jonathan Lachance holds a B.A . in English and a masters degree in urban planning, but he's all about fiction. He recently completed a first novel, Heirs of Eminence, and is hard at work on his second. He has published articles on urban planning in Progressive Planner magazine. When he's not glassy-eyed in front of a computer, there's a good chance he's reading something by Murakami or Chandler or practicing Yiddish with his bubbe. He lives in Brooklyn. Contact Jonathan@kgbbar.com.