“‘Conversation!', exclaims W. That's what friendship's all about.” And this is a novel made up almost entirely of conversations. 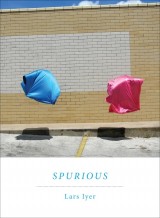 The protagonists of Lars Iyer's first novel, Spurious, are two British academics. They make off-hand esoteric references – to cryptic thinkers like Emmanuel Levinas and Gilles Deleuze, to rarefied artists like Bela Tarr – and their discussions of the concept of messianism, of Judaism, of Kafka, are intensive. And yet the book is a quick read, and also very funny. And – sort of – poignant. This is because, I think, Spurious isn't really about anything as ethereal as critical theory, but friendship. The novel takes the form of a series of conversations between the narrator, a philosophy lecturer named Lars, and his former mentor, W, as they visit each other at their homes in their respective corners of the UK, or travel to conferences, or – most often – drink in bars in the cities where those conferences are. There are also increasingly frequent descriptions of the mold that seems to be devouring Lars' house. The point isn't belabored, but the mold, while very literal, could also serve as a metaphor for Lars' general decline. He hasn't published anything of substance in years, has fallen into a depression, and is gaining weight. Most of this we know, though, not from Lars himself – he's a reticent narrator – but because W. reminds him of it, as here:


‘How can you live like this?', said W. exasperated beyond belief. ‘How?' I've always maintained that this is my five year hole. Everyone should be allowed one of those. Deleuze had one, didn't he? A five year hole, that's what he called it, in which he wrote nothing? – ‘But Deleuze was working', says W., ‘and you don't do any work do you? What happened to you?'


The time always comes when I refuse to say anything at all and slump down in my chair. – ‘That's when your immense belly becomes visible', says W., ‘during the slump'. It's like Moby Dick, says W. Vast and white and rarely seen. But there it is in the slump. It always amazes him, says W. It amazes everyone.

W. isn't doing much better, though he is doing a little better, perhaps because he is, as he points out, a little smarter (“His IQ's higher than mine, W. says. Just a little bit, but that's what separates us, man from ape.”). Both men are convinced that they're living in the End Times, that “these are the last days...it's all shit, it's all going to shit.” They never give an explanation for their sense of impending doom, besides vague mentions of “the ecological disaster and the financial disaster,” but they're certain that soon “the oceans will boil, the sky will burn away into space.”They are facing smaller, personal apocalypses as well. They find themselves incapable of thinking like the great thinkers they admire. The best they will ever be able to do is “write interpretive essays on the work of others more intelligent and gifted than we will ever be...despite the fact that we will always misunderstand their genius, and bother them with our enthusiasm.” If there's any hope, according to W., it might be found in moving to Canada, to live among the “open-hearted Canadians,” or learning to drink like a Pole (“they're experts”), or simply watching the films of Bela Tarr, whose work portrays “mud, rain, and the infinite.” But most of the time the two of them sound like Vladimir and Estragon in Waiting for Godot:


We should hang ourselves immediately, W. thinks, it's the only honourable course of action. We are compromised, utterly compromised.

Did I say this novel was about friendship? But literature has known no better friends than Vladimir and Estragon – or, not until Lars and W. All the brow-beating, all the insults, all the expressions of existential despair – W. wouldn't deliver this, and Lars wouldn't put up with it, unless W. and Lars needed it, unless they were inseparable. We know they're close not because they say it, but because we can't doubt it. How could you question the honesty, and trust, of someone who told you your attempts to change your life remind him of “the cartoon mouse who hits the walls and then slides down it...It's painful to see, but also funny”? “‘Conversation!', exclaims W. That's what friendship's all about.” And this is a novel made up almost entirely of conversations.If the book makes any missteps, it's in the very few instances when the inner workings of this friendship are explained too explicitly – when Lars or W. tell us what Spurious itself is overwhelming evidence of:


Drunk in the sun, we offer encomiums to one another. I never make him feel anything other than joyful, says W. I tell him he is able to momentarily make me forget my troubles and that this is his great gift.

This is too much. Or rather too little. No friend, in a moment of crisis, could give a sounder reason to go on, than by saying this:


Of course, I should take my life immediately, that would be the honourable thing, W. says. I should climb the footstool to the noose...But it would already be too late, that's the problem, W. says. The sin has already been committed. The sin against existence, against the whole order of existing things.

Lars Iyer is a Senior Lecturer at the School of Modern Languages at Newcastle University. He has published two studies of 20th-century French literary critic Maurice Blanchot, Blanchot's Vigilance and Blanchot's Communism. Spurious is his first novel. He blogs at: http://spurious.typepad.com.