Sid Jacobson's and Ernie Colón's THE 9/11 REPORT: A GRAPHIC ADAPTATION 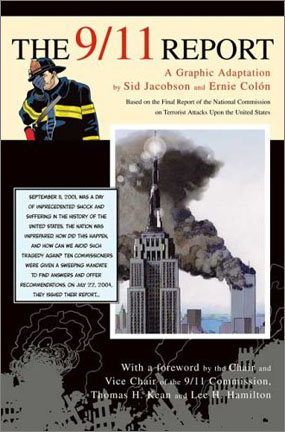 Hill and Wang, September 2006
128 pages, $30.00
This graphic adaptation of The 9/11 Report brings a new immediacy to the original assessment of the terrorist attacks of September 11, 2001. In this illustrated edition, stark imagery, pared-down exposition, and neon-colored interjections ("Whoom!" "Shoom!") tell the familiar, horrifying story of the four hijackings, the plane crashes at the World Trade Center and the Pentagon, and the U.S. response. The new book's creators, writer Sid Jacobson and artist Ernie Colín, list Marvel and DC Comics among their credits, and they've used their skills to render events in hyper-dramatic, crash-speed form. Readers already absorbed in the history of Sept. 11 will discover new angles in this edition (a robed, turbaned jihadist awkwardly aiming a submachine gun, for example, conveys a unique shock). It will also appeal to fans of graphic novels, thus drawing casual, younger, and time-limited readers to a subject they haven't previously considered in depth.

The original 9/11 Report, based on 2.5 million pages of documents and interviews with more than 1,200 people, totals 585 pages. The graphic version, which follows the original chapter for chapter, runs only 134 pages. Yet the briefer edition doesn't skimp on essential facts. Long passages have been cut and dialogue has been added, yet some descriptions are repeated exactly. The major difference lies in the new edition's graphic arrangement.
As comics fans know, reading a graphic novel isn't like reading text. The experience is nonlinear-the eye jumps all over the page. Thus, a panel showing the struggle for control of United Airlines Flight 93 is dominated by a drawing of a rolling, pitching airplane. Dialogue balloons contain someone's question ("What is the bastard doing?"), someone else's answer ("Hold on! He's not going to stop us!"), and the authors' summary ("And it did not stop them!"). Here, the action on one plane is shown on a timeline that parallels the other three planes' progress. Elsewhere, visual frames convey a single, forward-moving story. Other passages convey information with charts, as in descriptions of homeland defense systems juxtaposed against a U.S. map.

Another riveting section shows how the principal terrorists prepared for their action. Called "The Hamburg Contingent," the sequence follows several aspiring jihadists from Germany to Kandahar, Afghanistan. Their technical skills and knowledge of life in the West made them shoo-ins for key roles in Al Qaeda's Planes Operation. In 2000, the men returned to Hamburg, where they cut their beards, wore Western-style clothes, and stopped attending mosques. Lead terrorist Mohamed Atta e-mailed flight schools in the United States on their behalf and they moved to the States for training.

What's striking five years after the fact is the inability of the administration to achieve many of commission's goals. In a postscript dated December 2005, the commission states that the president and Congress responded poorly or not at all to its calls for the following: guidelines for government sharing of personal information, a privacy and civil liberties oversight board, and standards for coalition detention. On the other hand, the commission credits the administration with successes such as halting terrorist financing and getting rid of terrorist sanctuaries. Of course, the degree of success or failure in each of these areas is debatable. One can hope that the arrival of this new edition will bring these issues into sharper focus and encourage an ongoing dialogue concerning possible courses of action in combating terrorism.

Sid Jacobson was the managing editor and editor in chief at Harvey Comics, where he created several characters, among them Ritchie Rich, and was the executive editor at Marvel Comics. He is the author of two novels.

Ernie Colín, the artist, has worked at Harvey, Marvel, and DC Comics. At DC, he oversaw the production of the Green Lantern, Wonder Woman, Blackhawk, and The Flash.