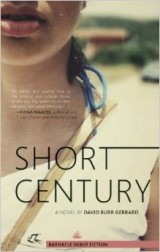 Is the personal political? David Burr Gerrard's debut novel Short Century (Barnacle Books/Rare Bird) answers that question strongly in the affirmative, at least in the life of journalist Arthur Hunt. A privileged WASP whose sixties radicalism calcified into strident neocon-ism by the time of the Iraq invasion, Short Century is Arthur's defense of not only his ideology but also his own sordid past. He narrates the novel just after his incestuous relationship with his younger sister Emily is brought to light by an anonymous blogger, Peter the Reaper, intent on attacking Arthur as a craven tool of imperial power. No longer able to hide his deepest secret in the shadows, this forced confession, written in one sleepless night from the confines of a room at a storied Manhattan hotel full of the ghosts of Arthur's family past, is meant to justify and absolve its author. As with most efforts on these lines it falls short, doomed by Arthur's blind spots. After all, rare is the person who can look at themselves in the cold light of day without making some favorable revisions to the image; how much more so when the reflection shows a man whose support of drone warfare extends to having caused a civilian casualty himself, and whose sister gouged out her eye after their short-lived affair? The accusation of incest comes on the heels of the death of Arthur's old college girlfriend, Miranda Rothstein. Her husband Jersey authored a sixties treatise on sexual freedom entitled "The Dominion of Pleasure," and Arthur and Miranda became adversarial acolytes of his before Miranda commenced an affair with the older man, ultimately marrying him. Their three children reenter Arthur's life after 9/11, when his writings in favor of intervention gain him notoriety and inspire Miranda and Jersey's son Jason to enlist. The Rothstein daughters also are drawn into the debates of the day, with one daughter, Sydney, becoming a journalist hell bent on exposing the extremities of Muslim fundamentalism and another, Daisy, choosing to wear a burqa, not as a symbol of solidarity but rather as an insult to her more serious siblings and countrymen. Gathering together at Miranda's funeral the very day after Arthur finishes his explanatory memoir, the entire remaining family, save Sydney, is killed with Arthur in a bomb attack at the grave site, a fitting end for a man who embraced the violence of drone killing and also paved the way for the suicide attacks of the insurgency. As a direct critique of America's recent foreign policy, Short Century is only a glancing blow, muddying the waters by dwelling less on Iraq and more often on a mysterious composite Islamic nation referred to only as “REDACTED” and held under the grip of despot brothers whose rule seems closer to a North Korea style dictatorship. It sometimes strains too far to be topical, as with wasted cameos from a youthful and cocky George W. on the campus of Yale and a peripheral character who goes on to become a stereotypical self-satisfied talking head on the TV news. But as a critique of the entitled, blinded attitude that enabled the neocons to force their agenda it is unsettling in interesting ways. Arthur's narration dwells on his college days protesting the Vietnam War and romancing Miranda at great length, avoiding as much as possible going into equal detail about the war in Iraq and delaying addressing his seduction of Emily. While Arthur does ultimately divulge all the gory details of his sexual obsession and dalliance with the strong-minded Emily, he never discovers her ultimate fate. Understandably persona non grata with his family after the incest is discovered, Arthur disappears from their lives (though not to the extent where he doesn't still bank on his father's connections) and avoids facing any actual repercussions or determining Emily's fate. He seems to prefer a similar ignorance on the outcome of America's wars of intervention, as if the high ideals that were invoked do not deserve to be sullied by any encounter with reality. It is in this context that Arthur's pursuit of Emily is notable. Exposed to Jersey Rothstein's ideas rejecting sexual restrictions of all kinds, Arthur uses the principle of ‘freedom' as a veneer for baser desires. His stated goal to become, with his sister, “Destroyers of the Greatest Taboo” is a convenient excuse for satisfying his long-developing lust for the young, vibrant and sexually active Emily. So too must Arthur's explanations for the need to invade Iraq and the mysterious story-book-land REDACTED be mere window dressing, covering up an older, less lofty desire. And in fact Arthur's interest in Emily and REDACTED both stem to his childhood, when Emily would ask him to read aloud a picture book set in REDACTED, choosing Arthur as the favored sibling rather than Arthur's nemesis, their bullying older brother. Passionate defenses of ‘freedom' aside, here is the real motivating factor in Arthur's advocacy for America's expansive wars—simply a selfish desire, to be gained at any cost, to recapture a childhood connection with his long lost sister. In an afterword, Sydney Rothstein confesses that she herself has been writing as Peter the Reaper, angry with Arthur for the death of her brother, a casualty of Arthur's rhetoric. One final punishment comes in the revelation that Sydney is pregnant with Arthur's child, conceived in a one night stand and now to be aborted. It hardly seems too harsh a verdict. A son of America's elite, Arthur used the power of his position to go after whatever he wanted while doing his best to ignore the fallout. The entitlement and self-justification are recognizable from our own public figures, even though the details are extreme.David Burr Gerrard graduated from Columbia University with an MFA in fiction writing. He's a contributing editor for Tottenville Review and his short fiction has been published in Extract(s). He lives in New York City.