Shari Goldhagen's FAMILY AND OTHER ACCIDENTS 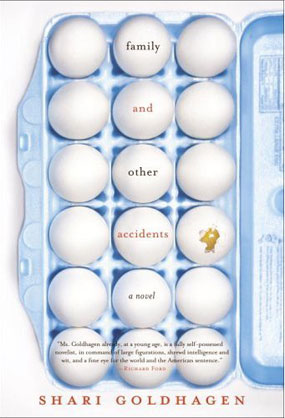 At times brilliant, at times tactical and plain, Shari Goldhagen's Family and Other Accidents has moments of wisdom, wistfulness and elegiac beauty as it describes relationships atrophied by miscommunication and elapsed time. The novel recounts the accidental lives of the orphaned Reed brothers over two decades. Jack, ten years older than Connor, returns to Cleveland to be his guardian when their parents unexpectedly pass away. While Jack copes with the sudden responsibility and authority of being a parent, Connor yearns for a closer relationship with him, seeking in him both mother and father.


Over the years, their dysfunctional family of two expands to include more complications - patient Mona for Jack and devoted Laine for Connor. Jack and Connor play out their lives unawares, profoundly affected by accident and circumstance. What follows are reactionary lives led by chance, rather than choice. It is noteworthy that both Mona and Laine are dedicated and patient - and always waiting for the men to make some decision, some choice that will liberate them from the heavy sense of inherited fate. Though these are modern superwomen, ambitious, focused, and capable, they are far more emotionally dependent on their men than the women from Jane Austen's world.

I appreciate Goldhagen's depiction of how things dissipate, how elusive things that cause you pain are not necessarily what makes you happy when they are attained. How great things become middling and unwanted; how plain and petty we all are at the end. And that there are consequences for lost time. This is well exemplified when Jack asks Mona for a divorce: "it had been the saddest moment of her life because she realized he had no desire to hurt her, he simply wanted to leave."

Goldhagen ascribes the vast majority of our actions to guilt and things that have nothing to do with desire. She excels at describing the heaviness of the real - the emotional squalor that has nothing to do with poverty - such as in As Good As It Gets where Helen Hunt's character's evening out is cut short when her date rejects her, commenting that her sick child's vomit on her dress is "too much reality for a Saturday night."

Goldhagen is indeed talented and knows how to turn a sentence, especially in describing Connor's cancer stricken body as seen by Jack: "he noticed the question mark curve of his brother's bald head." In another moment, Connor is depicted as a disease-ridden saint - emaciated, suffering, shitting and vomiting at same time. Yet there are also mediocre moments in which Golhagen submits herself to using easy gimmicks such as having consistent multiple year gaps between chapters.

At times touching, at times rote - Goldhagen's writing is disjointed and inconsistent. It is as though she tired of diligent writing. There's a lot of "answers with more sincerity than he has ever had about anything" and just too many 'ever' statements. These statements are more 'tell' than 'show' and are hurried attempts of lending an air of gravitas to her writing. This is particularly evident in the interactions between Jack and Conner; almost every moment they spend is "ever had about anything" which is at first touching, then rote, then grating.

Though Family and Other Accidents has moments of clarity in which deep emotions are elucidated, on the whole, it falls short of great. Goldhagen is clearly a keen observer and reporter of human interactions. However, she is not yet a long-distance runner - her novice style reveals itself when she relies too heavily on literary devices to pull the story through where the connections fail. The reliance on multi-year breaks between chapters betrays that she is more familiar and comfortable with shorter runs - at times, the chapters work better as short stories, rather than as components of a complete work. I look forward to her second novel.