Adam Eaglin holds degrees in literature and writing from Duke University and Boston University. His writing has appeared in Words Without Borders, Harvard Review, Publishers Weekly, TheAtlantic.com, and VanityFair.com, among others. He works in book publishing in New York. 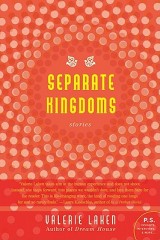 It's not uncommon these days to hear a literary critic bemoan the decline of the short story. But despite the handwringing, the last decade has given us some extraordinary short story collections, often introducing great young literary talents like Yiyun Li and Jhumpa Lahiri, or more recent successes like Lydia Peele, Wells Tower, and Karen Russell. I would now add to that list Valerie Laken, whose first collection of stories, Separate Kingdoms (Harper Perennial)—the follow-up to her debut novel, Dream House—is a compact but moving set of polished, elegant narratives and illuminating character sketches. With settings variously in Russia and the United States, this collection seems at first to be a book about the clash of opposing cultures—East and West; young and old; rich and poor—but Laken is more interested in her characters on a more human level, in their inability to connect with one another, emotionally and physically, and in the way life has damaged them. Nearly every story has a character that is wounded or maimed in some manner, like Marion, the wife in “Spectators” whose leg has been amputated following a car accident, or the father in ICU after an aneurysm in “God of Fire.” Such physical ailments in the book serve, ultimately, to reveal the less tangible wounds that plague the characters, or to expose the way that we use such visual injuries as a justification for imposed emotional isolation.The complex, misunderstood effects of a bodily “defect” are subtly explored in the Pushcart Prize-winning story “Before Long,” which opens Separate Kingdoms. Although relatively short on narrative, the story is nicely layered with complicating factors—we learn immediately that Anton, a young Russian boy, is blind. His older best friend, Oleg, pushes him reluctantly into a world of adult sexuality by, in a smart little scene, “reading” the photos in a pornographic magazine to him. Although the story is presented almost entirely through its non-visual details—taste, smell, touch, hearing—we are told that Anton's mother was once a great beauty. And though they live in poverty, she manages to secure Anton an appointment with a Western dentist to get his teeth “fixed.” It's a seemingly benign event that sets the story into motion and leads to its affecting dénouement. Laken paints her strokes delicately—while adequately tying up the necessary loose ends—so that the story's efficiency becomes its strong suit.Laken can be a wonderful stylist, and she pleasingly plays with the possibilities of the short format. Her title story, for example, is visually experimental in its structure (twin narratives progressing down each side of the page), but elsewhere, her stories become almost impressionistic—like prose poems in their dreamlike, non-narrative qualities. “Scavengers,” the tale of Tommy, a solitary boy in a run-down, abandoned neighborhood, was not my favorite in the collection, but it was punctuated, much like the book as a whole, with such moments of sad, unexpected poignancy:

Her idea for today was to break into the old homes of all the dogs I recognized and let them at least go curl up and sleep in their old beds, out of the snow. [...] They'd race through the door barking, “Honey, I'm home,” and scramble on their long, unclipped claws from room to room. They'd go hunting for traces of their lives, finding foul new smells and wires exposed and puddles from burst pipes. Big empty spaces where the beds had been. They'd start making those panicky high-pitched noises and they'd look back at us, perplexed and answerless, all of us realizing together that we had no solution at all for this. We knew nothing. I knew this because I'd already tried it before.

The worlds in Separate Kingdoms are, admittedly, a bit dour, but not gratuitously so, and Laken's experiments—style and subject-wise—generally succeed at what seems to be their goal, portraying lives and relationships that feel startlingly authentic, even if they are plagued by concerns that would be foreign to many readers. The result, by juxtaposing each story and each character against one another, is a taut, beautiful book about very human characters struggling to find connection and to make sense of the lives that they've almost unexpectedly found themselves living.Valerie Laken majored in English and Russian at the University of Iowa, then worked and studied in Moscow, Prague, Krakow, and Madison, before moving to Ann Arbor, Michigan. She received an MA in Slavic Literature and an MFA in Creative Writing from the University of Michigan, where she taught for several years. She teaches in the Creative Writing program at the University of Wisconsin - Milwaukee. Her work has appeared in such places as Ploughshares, The Missouri Review, Alaska Quarterly Review, The Writer, and The Chicago Tribune. Her honors include a Pushcart Prize, an Anne Powers Prize, two Hopwood Awards, a Missouri Review Editors' Prize, and an honorable mention in the Best American Short Stories.

Adam Eaglin holds degrees in literature and writing from Duke University and Boston University. His writing has appeared in Words Without Borders, Harvard Review, Publishers Weekly, TheAtlantic.com, and VanityFair.com, among others. He works in book publishing in New York.