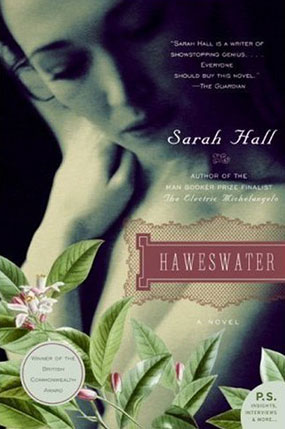 Harper Perennial, October 2006, 304 pages, $13.95They say that Eskimos have 1000 words for snow yet the English language only has a handful of words to describe rain. The enormously talented Sarah Hall, in her moving and slightly subversive novel, Haweswater, seems to have single-handedly developed a new vocabulary to describe precipitation. In 1936, H2O is a unique and distinct character in Mardale, a tight-knit English village that is soon to be flooded out of existence by the Parliament-ordered Haweswater Reservoir Project, which will eventually provide power to the industrial powerhouse of nearby Manchester, and for the upcoming war effort. Early on, Hall devotes entire breathtaking paragraphs to describe weather, of all things. When the rain stops you are ensconced in the daily rituals of an idyllic English pre-war farming village complete with local pub, eccentric artist, one-room school house, spinster headmistress, stew for dinner, border collie snoozing by the fire, and the ideal hard-working, stiff upper lip sheepherding Lightburn family.

But of course there's more to the Lightburns and Mardale than meets the eye. Ella, the mother, met Samuel, the father, while a WWI nurse. Her nightmare memories of deathbed suicides and senseless loss balance her staunch Catholic faith and flat-footed approach to life. Isaac, the silver-eyed young son, can hold his breath for minutes on end and can often be found in lakes and ponds, even in winter, staring at sleeping trout and sunken rocks that only reveal their beauty when wet. Janet Lightburn, the "not-beautiful" daughter with blue-blond hair, headstrong and 18 years old, is as comfortable reciting poetry as she is in trousers, dipping sheep with her stoic father. The family's complicated inner lives and passions awaken when devilishly well-dressed Jack Liggett, of the Corporation, blazes into town to condemn Mardale and usher in its demise.

Haweswater isn't simply an environmental morality play between evil land-destroyers and kindly local earth stewards. The author is equally interested in exploring what it means to be a person trapped in the jaws of history and of desire. Janet Lightburn and Jack Liggett both struggle with their roles in Mardale's endgame. Janet is helpless to defend it and yet yearns for momentous change. While in Mardale, Jack transforms from a slithery dandy into a salt-of-the-earth local and still is contractually obligated to mastermind the transition from ancient working town to watery grave. The two fall in a kind of love in the twilight hours of a world that will disappear before the spring shearing season. Their lovemaking is strange and brutal, each encounter leaving one or the other bruised, bleeding, raw or frozen. They do it like animals -- as often as they can, furtive, and outdoors, no matter the weather. No bodice ripping here, just clear-eyed and masterfully handled prose that consistently enables the entire novel to crackle with fresh contemporary realism.

There are no winners in Haweswater. No one emerges unharmed -- the doomed lovers, the laborers who meet vicious ends constructing the dam, even little Isaac grown to adulthood cannot escape the undertow of the Haweswater Resevoir. Mardale, its remaining buildings submerged intact like a hellish snow-globe, has the last word, a silent testament to the destructive powers of technology and progress, haunting the reader long after the final pages.

Sarah Hall divides her time between the north of England and North Carolina.

Arlaina Tibensky is a graduate of Columbia University's MFA program in Creative Writing. Her fiction has appeared in One-Story, Small Spiral Notebook and The Madison Review, among others. She is currently at work on a novel and is expecting a baby in early November.
sarah_halls_haw.