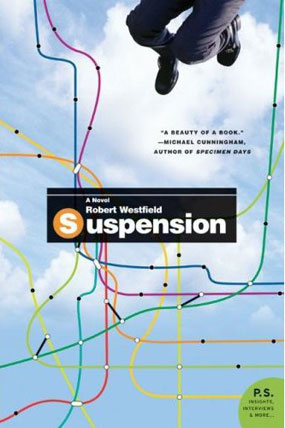 Robert Westfield's debut, Suspension, has a plot, but you don't need to pay attention to it to enjoy the novel; the bulk of its pages pay loving homage to New York City. Westfield builds the framework of protagonist Andy Green's life atop a foundation of the city's gridiron streets, subways, and bridges. Andy is a gay man who has escaped from a low-rent corner of Maryland and his domineering mother and licentious sister. He writes trick questions for standardized tests and spends his off-hours with his new boyfriend Brad, a wealthy arts patron, and Sonia, a Russian immigrant who dreams of becoming a famous cabaret singer (and who may just be the funniest former-USSR-inspired character since Sacha Baron Cohen's Borat).

Then, in the blink of an eye, Westfield bulldozes the framework: Brad disappears, and Andy and his sister's new fiancé are brutally assaulted in what seems at first to be a gay-bashing incident. Andy retreats to his apartment; the city that was once his salvation is now a looming menace, so frightening that he cannot even look out the window. His mother and sister arrive on the scene and rob him of his remaining sense of propriety. Then comes ... September 11th. It's a hell of an 800-lb. gorilla to have sitting around your first novel, but Westfield works it in effectively, letting the attack and its aftermath emanate from the characters, rather than from the World Trade Center site.

When Andy ultimately emerges from his hovel, he is reborn in the tradition of Poe's Man of the Crowd, a furtive observer of the newly threatening city, a circumspect investigator. Gone is the omnivorous, hands-in-the-air Manhattanite of fabulous bistros and fierce conversations. Westfield makes clear the parallels between Andy's psyche and that of the whole city. I almost wished Suspension came in two separate volumes: the first with its wicked humor and teasing tendrils of mystery, and the second with its heavy, wet-wool, winter-colored plot. I would have read the first at the beach and left the second for a moodier day. This may be a testament to how well Westfield shifts the story's mood from upbeat with an ominous edge to downbeat flourished with humor, but I also detected a whiff of a talented first-time novelist getting frustrated with the conflicts he'd set up for himself to resolve. As any toddler can tell you, it's never as much fun to clean up as it is to make a mess. Westfield's decision to relocate the story's resolution to Wheeling, West Virginia, is analogous to that toddler getting fed up with a toy-strewn living room and moving his game to the space under the dining room table. Perhaps Wheeling reflects the diminished expectations of both Westfield and Andy as they arrive at the end of their slogs. Why must resolutions so often turn into anti-climaxes? No matter, it's done. On to the next story, Mr. Westfield. I look forward to it. robert_westfiel.