Lin's new novel, Richard Yates, tries another strategy. Here we follow a relationship between two young writers as it forms, intensifies, and falls apart, and we're given what feels like everything. 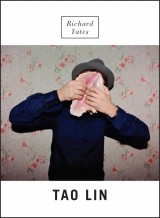 If – somehow – a dolphin actually clubbed Elijah Wood death, would I find this funny? I don't think so: it would probably be horrifying, frightening, too strange for me to accept. But even asking myself that question makes me grin; and when in Eeeee Eee Eeee Tao Lin described, at length, a dolphin clubbing Elijah Wood to death, it had me, and many others, laughing out loud. No critic or novelist I know of has completely explained this gap between an event and its narration. But one of the many things Lin did vividly in his first novel was expose it.Lin's follow-up, the novella Shoplifting from American Apparel, left off the fantastical elements for a realistic – to the point of nearly being tedious – portrait of a young writer in the aftermath of a relationship. But here, too, Lin's direct, simple prose led to questions about language itself. The novella never told us how the relationship ended, and briefly, bluntly revealed the disturbing situation in which the young woman ended up, as if circling events that couldn't be described. Could they? The strange, unassimilated details that kept showing up – the “long sentence” one character spoke, the “thing” on the table that two characters touched and discussed without figuring out what it was – suggested an answer.Lin's new novel, Richard Yates, tries another strategy. Here we follow a relationship between two young writers as it forms, intensifies, and falls apart, and we're given what feels like everything: objective descriptions of the couple's sex; all the verbal turns of their face-to-face arguments, no matter how repetitive; e-mails between them in their entirety; transcriptions of their Gmail chats; what books they're reading; what times they wake up; what trains they take to see each other. If they plan a visit over the internet, we get:

“Come visit me.”“I want to skip school tomorrow and come but I only have $2. Maybe Kailey will lend me money. She has like $1,600.”“Skip school and come. Please.”“I'll come Thursday. Is that okay?”“I work Thursday,” said Haley Joel Osment.“Shit,” said Dakota Fanning. “My dad is coming Wednesday. And I work Friday. Can't you just call out Thursday?”“I called out Monday. Is today Monday. I called out Saturday.”

Or, we get everything except the protagonists' names. Calling them “Dakota Fanning” and “Haley Joel Osment” is a typical deadpan touch from Lin. And there are a few passages in the book that are as funny as the animal sections of Eeeee Eee Eeee. No matter how uneventful the material, Lin's comic timing can be impeccable:

After work he rode the 6 train to New York University's Bobst Library and sat in front of a computer. He wasn't a student anymore but someone had made a mistake and given him access until 2011. It was 2006.

But comedic beats are rare in Richard Yates. The book isn't playful, like Eeeee Eee Eeee, or coolly ironic, like Shoplifting. Haley Joel Osment and Dakota Fanning propel each other creatively, and the book is full of their in-jokes and descriptions of the art they exchange; but they're both so afraid of being alone that their attempts to become closer turn into increasingly panicked attempts to control each other. Haley Joel Osment, emerging from “a period of loneliness in high school, a period of loneliness in college, a second period of loneliness in college, a period of loneliness after college,” feels isolated when Dakota Fanning falls asleep next to him, worries about their future together every time she's late, exhorts her to lose weight so he'll remain physically attracted; Dakota Fanning, sixteen and living with a mentally unstable mother, struggles to change herself to keep him. So much attention is given to each of their conflicts, even the most minor, and to the ordinary details surrounding those conflicts – what film they were watching, what time he left, what time she emailed him later, what she wrote in the email – that reading the book quickly becomes overwhelming, exhausting. And when the relationship unravels – when Haley Joel Osment starts to make demands that Dakota Fanning can't fulfill, and Dakota Fanning turns self-destructive – the book begins to feel relentless, even – though this is fiction – invasive:

“Email me if you have anything to say,” said Haley Joel Osment in an email the next afternoon. “I'm editing my novel. I was going to email you but I feel tired now. And you didn't email me. So I don't know what you're thinking.” “I'm going to try harder,” said Dakota Fanning in an email. “Do you believe me? I've been trying. If I hadn't you wouldn't have visited me or let me visit you. I just need to try harder. I am now. I am going to try harder. I didn't email you because I thought you wanted to be left alone, that you wanted time to think. I miss you. You are my best friend.” “I think I feel indifferent to you right now,” said Haley Joel Osment in an email. “I don't know. It is depressing because I want to like you because probably I won't ever meet anyone like you, but I can easily meet someone who in other ways, like considerateness and thoughtfulness, I would like more than you.”

Although this is the book in which Lin adheres most rigorously to an aesthetic, and most precisely portrays his characters' interior lives, it's the one I'm least likely to re-read. I don't know that I can put myself through it again – that I want, or need, to know so much about any two people.The stream of detail culminates after the end of the story, in an index. Entries include The Piano Teacher, because Haley Joel Osment and Dakota Fanning watch it one night; Nicholas Sparks, because Dakota Fanning mentions that her mother likes his books; and Congee Village, because they several times eat at that restaurant. Flipping through it, I couldn't help but feel that all these names and places were interchangeable – in the same way that it made little difference whether Lin called his protagonist Haley Joel Osment or not.But Lin's style, taken to this extreme, leaves us at another paradox about language. So much of what the book tells us seems unnecessary, meaningless. But the experience of reading through it is nevertheless wrenching. The words matter and they don't matter. The only word I know for this paradox is literature.

Tao Lin is the author of the novel Eeeee Eee Eeee, the story collection Bed, the poetry collection Cognitive Behavioral Therapy, and the novella Shoplifting from American Apparel, all published by Melville House. He blogs at: http://heheheheheheheeheheheehehe.com/.